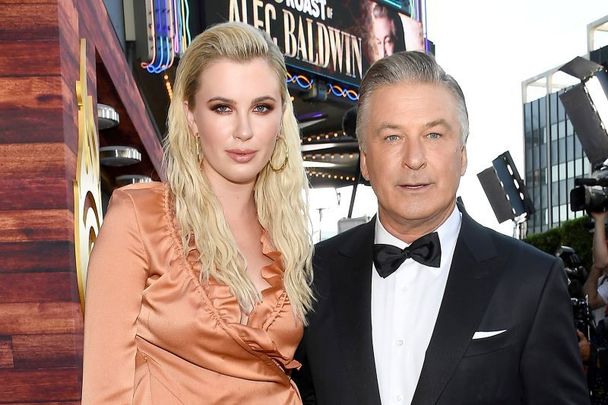 Ireland Baldwin, the 26-year-old daughter of Alec Baldwin, took to Instagram to address conservative commentator Candace Owens after she labeled her father's shooting of Halyna Hutchins as “poetic justice.”

Owens said in a since-deleted tweet on October 22: “Alec Baldwin spent 4 years dedicated to painting Donald Trump and his supporters as evil murderers. What has happened to Alec would be an example of poetic Justice if it weren’t for the actual innocent people that were murdered by him.

“Pray for their families. So sad.” 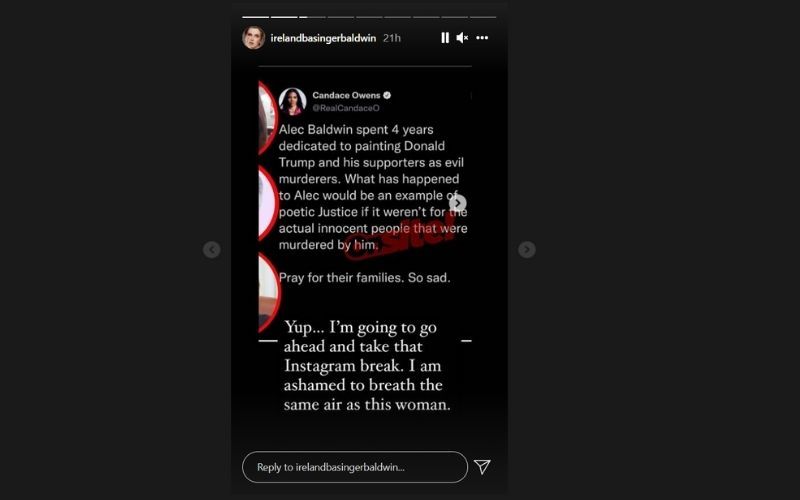 While she deleted that initial tweet, Owens followed up saying: “Will correct that last tweet to say Alec Baldwin *killed* someone— not murdered someone, as murder carries a different legal definition.”

Owens added: “Literally not one single thing that Alec Baldwin has said about Donald Trump and his supporters is going to age well.”

Ireland Baldwin responded via Instagram stories on October 25, first sharing a picture of Owens with a caption that reads: “You are the most disgusting, hateful, cancerous human being I’ve ever come across.

“Regardless of your foul opinions most of the time, the fact that you would disrespect the life of a woman who was accidentally and tragically killed … shame on you." 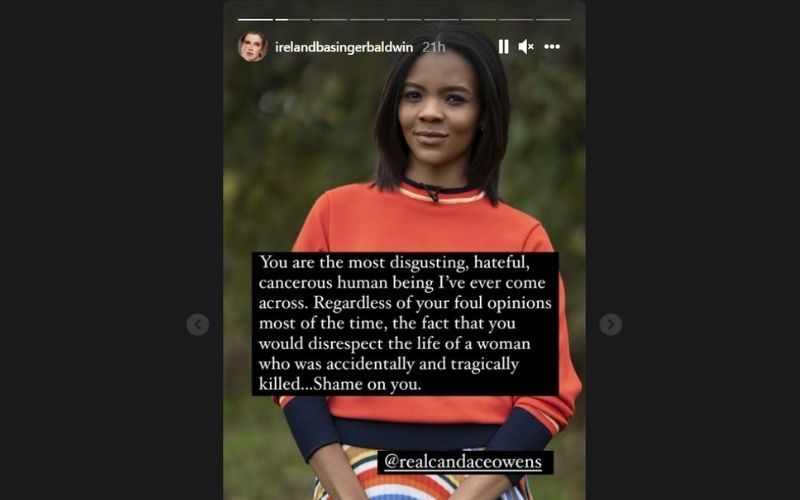 Baldwin added: “I am ashamed to breath [sic] the same air as this woman.”

“A woman’s life was lost. Your tweets, lack of information, and ignorance are hurting people. You and that scumbag @jackmposobiec don’t have a clue what you’re even talking about and you usually never do.

“I respect people’s opinions … but if you support these absolute clowns, please don’t follow me anymore. I beg.”

“If you simply don’t RESPECT people … then unfollow me. It’s so simple. Unfollow me if you don’t support woman’s rights. Unfollow me if you don’t support trans rights. LGBTQ rights as a whole. Human rights. But really hit that unfollow button if you’re trying to defame my father and tweet such horrific statements about this tragic situation. It breaks my heart that people are so hatefully ignorant …”

Over on her Instagram stories, Candace Owens wrote: "Ireland Baldwin is in my DMs [Direct Messages] because I don't feel bad for her psychopathic father.

"Feel bad for the victim. Not Alec.

"He has always been a predator in Hollywood who was given a free pass." 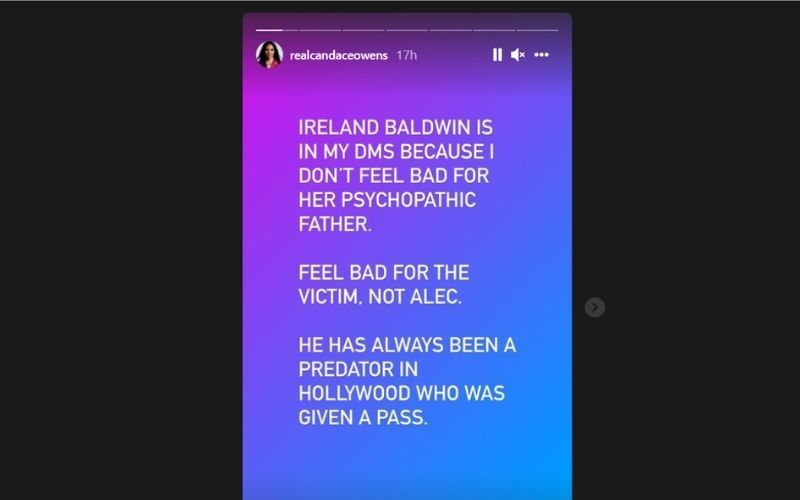 An Instagram story shared by Candace Owens on October 25.

Owens then proceeded to share a screenshot of her messages with Baldwin: 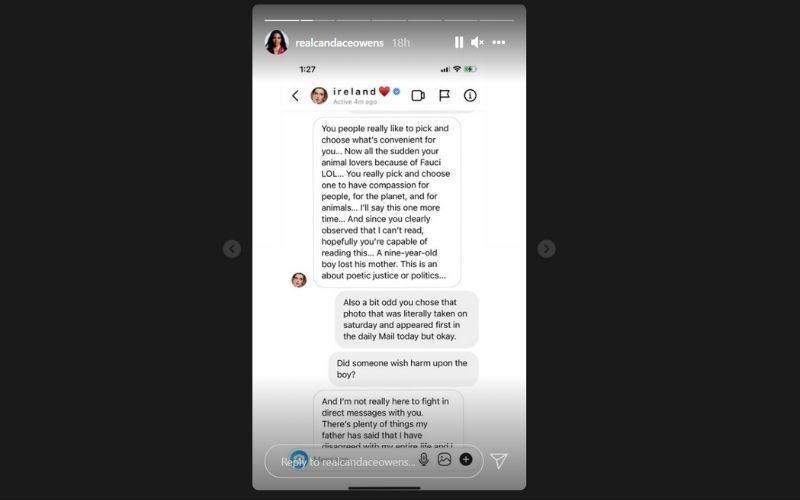 Candace Owens shared a screenshot of her messages with Ireland Baldwin on her Instagram stories.

A few hours later, however, Baldwin shared another Instagram story indicating without much explanation that the two may have patched things up. 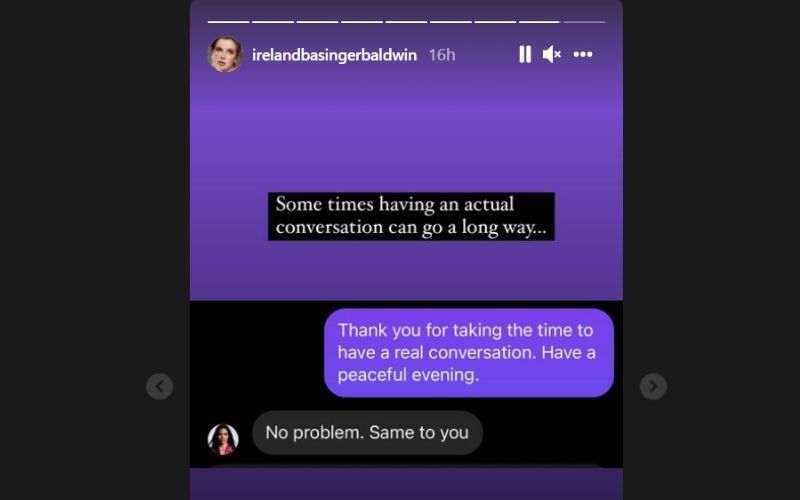 On October 21, Irish American actor Alec Baldwin fatally shot cinematographer Halyna Hutchins and wounded writer-director Joel Souza with a prop gun in an accident on the set of his new film "Rust" in New Mexico.

He said on Twitter afterward: "There are no words to convey my shock and sadness regarding the tragic accident that took the life of Halyna Hutchins, a wife, mother and deeply admired colleague of ours. I'm fully cooperating with the police investigation to address how this tragedy occurred and I am in touch with her husband, offering my support to him and his family. My heart is broken for her husband, their son, and all who knew and loved Halyna."