Josh Willis paid an emotional tribute to his wife Samantha, 35, who died last week in the intensive care unit of Altnagelvin Hospital in Derry shortly after giving birth to their fourth child. 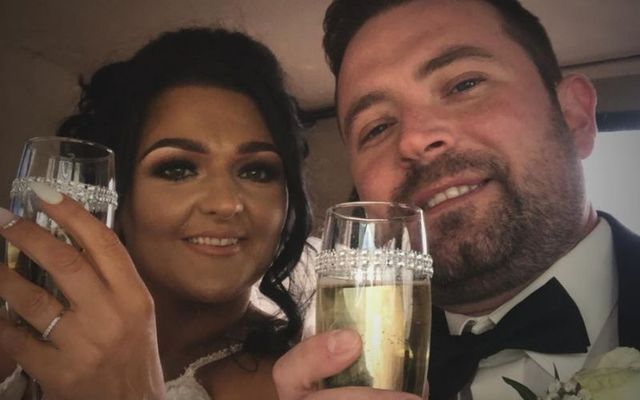 Josh and Samantha Willis on their wedding day in 2019. Josh Willis Facebook

The husband of a Derry woman who died with the coronavirus shortly after giving birth to their daughter has urged people to get a vaccine.

Josh Willis paid an emotional tribute to his wife Samantha, 35, who died last week in the intensive care unit of Altnagelvin Hospital in Derry after giving birth to their fourth child.

She was buried in Derry this week following an emotional ceremony, while her two-week-old daughter Eviegrace was also baptized at the same service.

Willis told RTÉ that his wife was unvaccinated because public health advice advised against receiving the vaccine during the early stages of pregnancy, even though she was a carer and eligible to receive the vaccine when Northern Ireland's rollout was in its infancy.

"Get your vaccine so you or your family don’t have to go through what I have had to. As I write this I am laying beside her, she is 35, unvaccinated, and in a coffin. Let that sink in," Willis said on Twitter through his signed memorabilia company.

I spent hrs in ICU on Thur/Friday with my wife who passed away. It’s real, the numbers are real. Get your vaccine so you or your family don’t have to go through what I have had to. As I write this I am laying bside her, she is 35, unvaccinated and in a coffin. Let that sink in!💔 https://t.co/9qgP5tGbeB

Samantha was 28 weeks pregnant when the advice changed and the couple thought it was safer to wait until after she gave birth before she got the vaccine.

"We were so close to the end and we had been so careful," he said.

Willis, who has been fully vaccinated, said that both he and his wife tested positive for the virus at the beginning of August.

"I was double vaccinated and I lost my taste and smell and that's bad in itself when you're hungry and trying to eat and everything tastes the same, but in the grand scheme of things I would take that the rest of my life, get Samantha back," he told RTÉ.

He said that his wife initially experienced mild symptoms but later began to experience severe breathlessness.

However, he said that "all the signs were positive" after she gave birth to Eviegrace but said that she "took a tip" shortly afterward and was admitted into ICU.

He told RTÉ that he and his four-year-old daughter Lilyanna video called Samantha while she gave birth to Eviegrace and said that Lilyanna had frequently spoken to her mother while she was in hospital.

He said that he took his four-year-old daughter to a cathedral in Derry to light a candle for Samantha and revealed that the hospital called him as they were making their way home to inform him that he needed to come.

He had to tell his young daughter that "mummy is very sick and the doctors say she might die".

He said that the color drained from his daughter's face when he told the news before she asked him "who will be my mummy then"?

Willis said that Holly and Shea, the couple's older children, were more understanding of the situation but equally devastated.

Samantha Willis died on August 20, one week after giving birth to Eviegrace.

In an emotional post on Facebook, Josh Willis paid tribute to his late wife and said that he had "lost the love of my life".

"All I want to do now is make Samantha proud. I’m sure she’s already looking down and proud of how we are coping. We are also proud of her, she was a wonderful, loving, and caring person and she has been our superhero the last few weeks. She is now our guardian angel and she will remain in our hearts and thoughts forever more," Willis wrote on Facebook on August 20.

"I will make sure that Eviegrace will know all about the mother she will never meet. I will never let anyone forget you and I will remember all the special times and experiences we shared together."

Willis told RTÉ that Samantha "put everybody before herself" and said that he would try to be positive for the sake of his children.

"I could nearly hear her telling me - that's it, we can't change anything. Move on and sort the children out," he said.

"She would probably say just leave me here and forget about me. I'm obviously not going to do that, but that's the kind of person she was; putting herself last again."