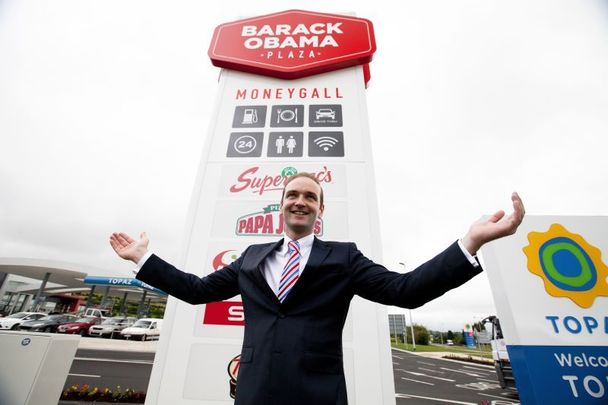 July 4, 2014: Henry Healy, Development Manager and a relation of President Obama, at the Barack Obama Plaza in Moneygall, Co Offaly, the village in which President Barack Obama's ancestors were born. RollingNews.ie

Henry Healy, Barack Obama’s distant cousin in Co Offaly, says he would not meet with Donald Trump during the former President's upcoming trip to Ireland if asked to.

“I wouldn’t be hungry and I don’t play golf,” Healy told the Irish Mirror, which surveyed opinions of some well-known figures who have connections to the White House or Doonbeg on Trump’s upcoming Irish visit.

Healy, however, added: “He [Trump] is a former President of the United States and so he should be afforded the dignity, courtesy, and respect that that office deserves.

“He has also provided valuable employment in a rural area of Clare through his investment in the Doonbeg golf club and we should be aware of that.”

Former President Trump is reportedly set to visit his golf resort in Ireland later this month, though it remains to be seen if the recent FBI raid on his Mar-A-Lago home in Florida, reportedly centered on documents relating to nuclear weapons, will change his plans.

Nevertheless, Trump won't be receiving the same céad míle fáilte in Ireland that Obama received from Healy in years past.

Healy, whose paternal uncle used parish records to trace then-Senator Obama’s great-great-great grandfather to Moneygall, had a hand in facilitating the Obamas’ stop in Co Offaly during their much-hyped official visit to Ireland in 2011, Politico reported in 2013.

In Moneygall, Obama was shown the site where his great-great-great-grandfather’s home once stood, and later, the US President stopped in for a pint - and a photo opp - at a pub run by Healy’s uncle Ollie Hayes (no relation to Obama). 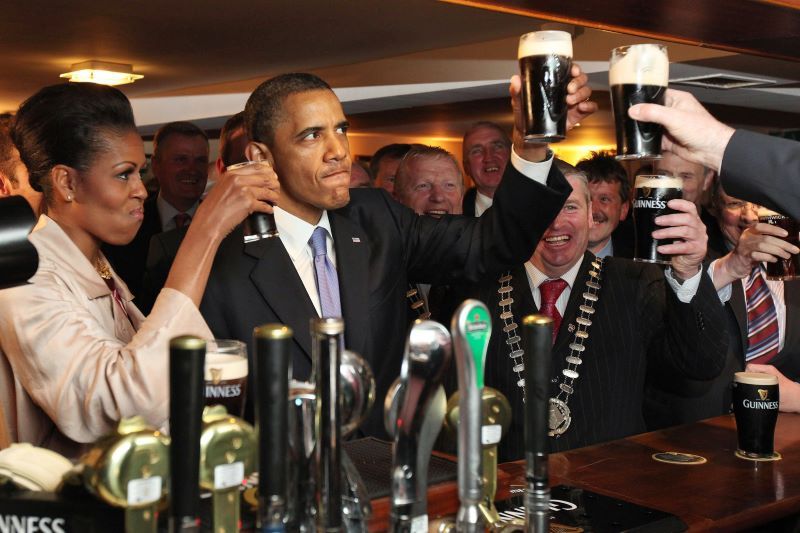 May 23, 2011: President Barack Obama in Hayes Bar in his ancestral home of Moneygall, Co. Offaly. (RollingNews.ie)

Since then, Healy has met up with the Obamas on both sides of the Atlantic - the Irish man was given “VIP treatment” at Obama’s second inauguration in 2012, and he even had a pint with President Obama at the Dubliner pub in Washington, DC on St. Patrick’s Day in 2013.

While Healy doesn't seem too keen to meet up with Trump in Co Clare this month, there are some who will welcome him with open arms.

“We are hoping that the visit goes ahead and lots of people here are looking forward to it," Doonbeg local Bridget Haugh told the Irish Mirror.

“He has been great for the area. He has brought employment and put Doonbeg on the map.

"My friends and my children are all talking about the visit.”

Trump last visited Ireland in 2019 when he was still President and his sons Eric and Don Jr made a splash when they went on a pub crawl around Doonbeg.

Security plans are reportedly underway in Co Clare ahead of Trump's visit, which is expected to be confined to his Trump International Golf Links & Hotel. As a former President, Trump is guaranteed Secret Service protection for the rest of his life, but, according to the Irish Mirror, Irish taxpayers will foot the estimated  €1 million Garda security bill for his Irish visit.