On This Day: US President Barack Obama arrives in Ireland for a visit

US President Barack Obama arrived in Ireland on May 23, 2011 - do you know about Obama's Irish roots? 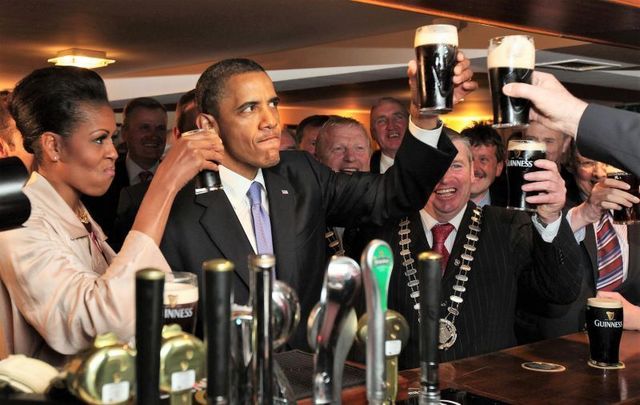 On May 23, 2011, US President Barack Obama and First Lady Michelle Obama arrived in Ireland, a visit that was in part inspired by the president's Irish roots.

Fulmoth and his sister Margaret left Ireland bound for Ohio, where their father had inherited land from a brother. Other members of the Kearney family would gradually make their journey to America, but Fulmoth was the most recent immigrant on the maternal side of Obama's family.

In late 2014, a historic photo of Fulmoth Kearney was discovered.

Merlyn White, Obama's third cousin once removed, learned of her connection to the president while visiting a distant relation in Scotland. The news led her to reconsider an old family photo album she had inherited from her 107-year-old great aunt.

In the album's pages, she found portraits of Fulmoth and his wife Charlotte, which she shared with Smolenyak.

The discovery of the historic photo came on the heels of the discovery of Kearney's final resting place in a Kansas cemetery, a mystery that was a loose end in Fulmoth's story, Smolenyak noted in a 2014 piece on her Huffington Post blog.

That year, President Obama’s second cousin once removed Dean Dillard of Chanute, Kansas, with the research help of Norman Peters, tracked down old cemetery records to Ohio and figured out that Fulmoth was buried in Kansas, in Labette County’s Fairview Cemetery, with his wife, Charlotte.

136 years after the Irish man's death, Dillard and Peters had a headstone erected on the bare burial plot in 2014. The headstone notes Fulmoth and Charlotte as the “great-great-great-grandparents of President Barack Obama.” 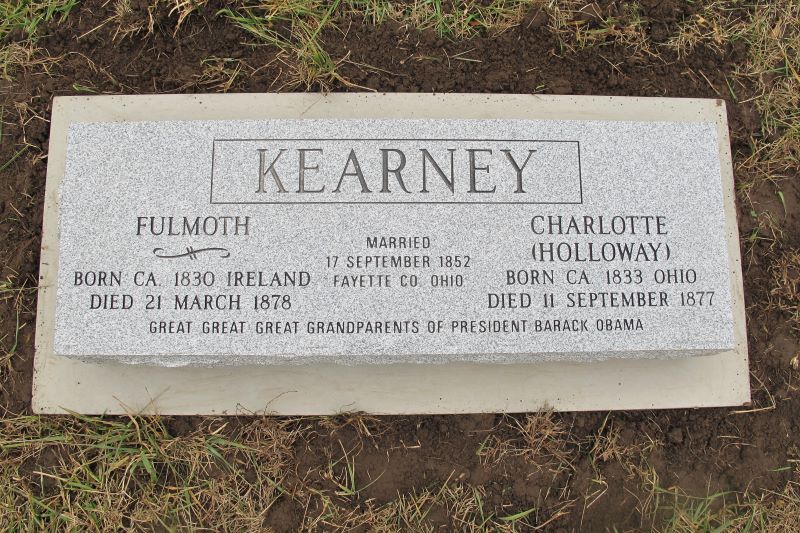 What's more, Merlyn White's photo album further corroborates this by listing the same dates of death for Fulmoth and Charlotte.

Smolenyak was thrilled with the fitting bookend to the story of Obama’s Irish ancestor.

"Thanks to the discovery and memorialization of the final resting spot of Fulmoth Kearney, we now how a cradle-to-grave rendition of the life of Barack Obama's Irish immigrant ancestor,” she told IrishCentral.

“The young fellow who left Moneygall in 1850 emigrated to Ohio where he built a log cabin, married, and had a family before moving on to Indiana and Kansas. He's well remembered in Ireland, and I'm delighted to see things brought full circle with a headstone for his place of burial in Kansas."

Between this and the photograph, she added, "I guess Fulmoth decided that it was finally time to give up his secrets!"

Interestingly, she pointed out, Melvina Shields Magruder, one of First Lady Michelle Obama's third great-grandparents, who died in 1938, was finally commemorated with a headstone in Georgia.

"2014 has been a good year for previously overlooked Obama ancestors," she wrote.

Smolenyak's discovery was one of the driving forces for President Obama and First Lady Michelle Obama's visit to Ireland in May 2011. In Ireland, Obama delivered a well-attended speech in Dublin and, famously, raised a pint in Moneygall.