Belfast shipyard Harland and Wolff sold to a UK firm after going into administration in August. 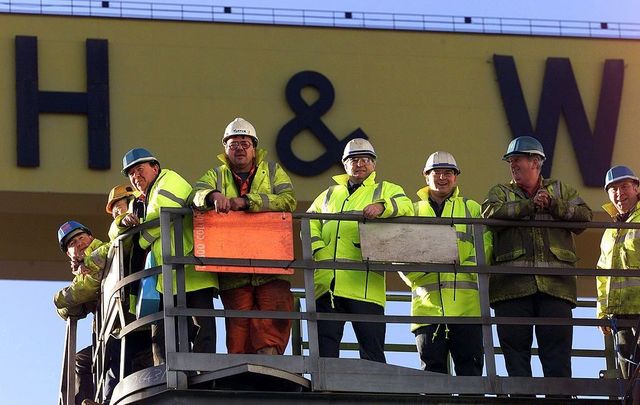 Harland and Wolff shipyard workers look on as the Anvil Point, the last ship to be built at the Belfast shipyard, is named in a ceremony on January 17, 2003, in Belfast, Northern Ireland. Getty

Iconic Belfast shipyard Harland and Wolff, most well known as the place where the Titanic was built, was saved from closure this week after a sale to UK firm InfraStrata.

The shipyard went into closure in August putting 120 jobs at risk. A nine-week trade-union-supported occupation has been ongoing until today's announcement.

"As well as safeguarding their own futures, the workers have sent a message that will be heard across Northern Ireland, most immediately by Wrightbus workers in Ballymena," she said.

Workers at Harland and Wolff celebrating the buyer news by updating the banner at their nine week demonstration at the historic Belfast shipyard pic.twitter.com/Ekvyui2kbP

Infrastrava, a London-based energy firm, closed the purchase of Harland and Wolff for $7.38 million (£6 million) this week after the yard went into administration when its Norwegian parent company collapsed in August.

The new owners have said that 79 workers who are still employed there will be retained, while they hope to expand the workforce by “several hundred” over the coming five years.

"I firmly believe that the shipyard has a promising future and InfraStrata's plans present an exciting opportunity for both Belfast and Northern Ireland's manufacturing and energy sectors," Northern Ireland Secretary Julian Smith said of the announcement.

Harland and Wolff employees ready to return to work after the famous shipyard finds a buyer pic.twitter.com/VAk0CqKsHE

"The last two months have been uncertain for the workforce, but their fortitude and indeed, the support from their Unions and the wider community, has been incredible,” added East Belfast MP Gavin Robinson.

"Today's announcement not only brings comfort for the workforce who kept their dignified presence at the yard, but Infrastrata have also outlined ambitious plans for growth in the future."