The Guinness Whopper will be available to Burger King customers in South Korea for a limited time only. 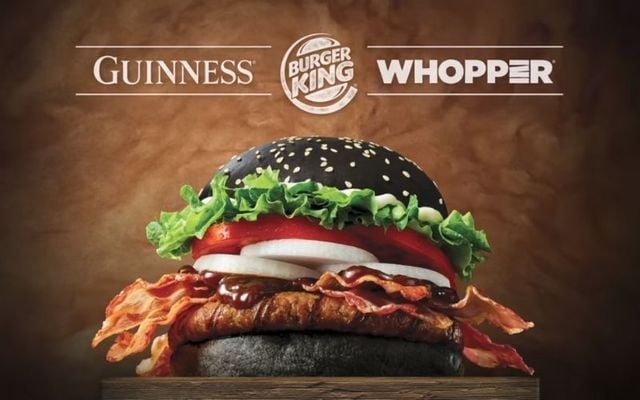 Burger King has released a new Guinness-themed Whopper to salivate over, but it's only available in South Korea.

The fast-food chain released the Guinness Whopper on August 31 and it will remain in South Korean restaurants for a limited time.

The Guinness Whopper and the Guinness Mushroom Whopper are now both available in South Korea and consist of Guinness's distinctive taste and fragrance.

Burger King is using the famous Irish stout in the buns and sauces for both burgers.

However, the alcohol content is safely removed by the time the burgers are ready to order, making them available to customers of all ages.

Nonetheless, Guinness's unique barley taste and fragrance remain in the burgers even after the alcohol is removed, meaning that the new Whoppers still boast the distinctive Guinness flavor.

Burger King has not indicated whether it will roll out the new mouthwatering burgers in its European and North American chains, but Guinness and hamburger aficionados alike will surely be crossing their fingers that they do.

We are absolutely itching to try this one out, but we're not getting our hopes up - the fast-food chain frequently releases special burgers and sandwiches specific to certain regions and countries, including a donut burger in Israel and a seven-patty Whopper in Japan which was released as a tribute to Microsoft's Windows 7 operating system.

Burger King even released a special Brussels Sprouts Whopper in the UK in winter 2010 in a nod to the British Christmas dinner staple. The fast-food chain removed the burger promptly when it received poor reviews across the board.

Would you try the Guinness Whopper? Let us know in the comments.