Ghislaine Maxwell was on an IRA "hit list," her lawyers claim

Ghislaine Maxwell's lawyers noted the IRA "hit list" as they argue for a reduced sentence for their client who was found guilty in December 2021 on five sex trafficking-related counts. 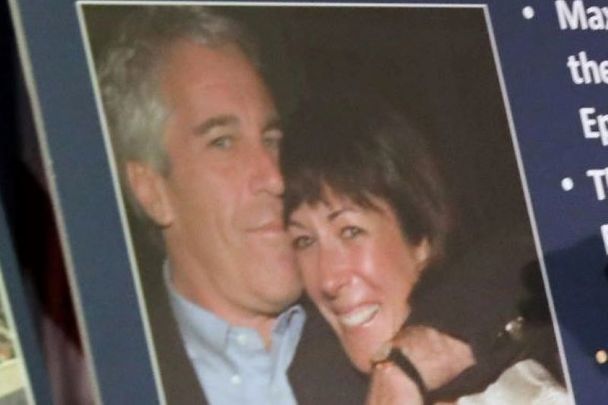 July 2, 2020: A photo of Jeffrey Epstein and Ghislaine Maxwell featured when Acting United States Attorney for the Southern District of New York Audrey Strauss spoke to the media at a press conference announcing the arrest of Maxwell. Getty

Ghislaine Maxwell's lawyers claim that she was placed on an IRA "hit list" as a child in the 1960s while her father Robert Maxwell worked as a British MP.

"When Ms. Maxwell was just a child and her father was a Member of Parliament, U.K. authorities found a 'hit list' of potential kidnapping / assassination targets in a safehouse used by the Irish Republican Army," Maxwell's lawyers alleged in their sentencing memorandum filed in New York on June 15.

"Ms. Maxwell’s name was first on the list," they wrote.

"This unnerving experience has haunted her," her attorneys alleged, adding that later in her life, Maxwell had "legitimate reason to fear for her own life."

Ghislaine Maxwell, who was found guilty on five sex trafficking-related counts late last year, is due to be sentenced on June 28. The Probation Department has recommended a 240-month sentence followed by five years of supervised release. Her attorneys, however, are seeking to reduce that sentence.

The IRA "hit list" claims are noted in her attorneys' memorandum as they attempt to cast Maxwell as an abused girl who suffered a neglectful childhood, making her all the more susceptible to Epstein's influence and thus lured into committing crimes.

"She had a difficult, traumatic childhood with an overbearing, narcissistic, and demanding father," her attorneys wrote. "It made her vulnerable to Epstein, whom she met right after her father’s death.

"It is the biggest mistake she made in her life and one that she has not and never will repeat."