The former Sinn Féin President was speaking at a Friends of Sinn Fein online event. 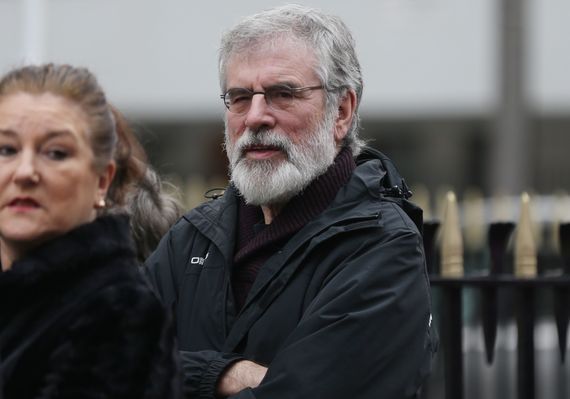 Gerry Adams has urged Irish Americans to get active on a united Ireland and be the Irish American generation that “comes home to a free, united, peaceful, and prosperous Ireland.”

The former Sinn Féin President was speaking at a Friends of Sinn Fein, the Irish republican party’s international wing, online event on Thursday also featuring Joe Crowley, a former U.S. Representative from New York, in a discussion about the role of Irish America in the struggle for Irish unity.

The event was moderated by Christine Kinealy, an eminent scholar of Irish history and founder of Ireland’s Great Hunger Institute at Quinnipiac University.

“There would not be a Good Friday Agreement without Irish America,” said Adams. “Had Bill Clinton not been persuaded to intervene to overturn what was decades of U.S. foreign policy of accepting the British position, then God knows where we would all be this day.”

The desire for freedom was a defining feature of Irish American identity for more than two-and-a-half centuries, reaching its “watershed” in the 1990s when Bill Clinton became the first U.S. president to become actively and directly involved in Northern Ireland.

But Irish America’s involvement in Northern Ireland began to wane after the Good Friday Agreement was signed in 1998, primarily because Irish Americans erroneously believed the issue of partition had been settled and no longer required active engagement.

“The Irish in America, and those that take an active part and care about this issue, think in some respects that the battle is won,” said Crowley. "This is because the agreement successfully delivered peace to the island and rendered many nationalist objectives obsolete by eliminating the physical border on the island. The movement thus lost much of its potency and appeal in the United States."

Now the drive for Irish unity, spurred by Brexit, has taken center stage.

“Irish America can play a central role in this process. I don’t think it’s possible to get it the way we had it [during the 1990s peace process],” said Adams, “But I do think it is possible to reinvigorate Irish America.”

This starts at grassroots level he said. Ordinary Irish Americans can engage their networks and convince their peers to take a serious interest in Irish unity.

“Wherever we’re active in our community, get them to come behind this rightful part of the Good Friday Agreement and make it a reality,” said Adams.

It was pointed out that the U.S. government can also serve as an important resource for Irish Americans.

Several U.S. politicians take an active interest in Irish affairs, including Speaker of the House Nancy Pelosi, who has expressed multiple times that the United Kingdom cannot expect a post-Brexit trade deal with the United States if it does not safeguard the Good Friday Agreement.

Importantly, Richard Neal, a U.S. Representative from Massachusetts and a prominent member of the Irish American community, chairs the House Ways and Means Committee, a position that gives him extraordinary leverage over U.S. trade negotiations with London.

It is clear that Irish Americans have the means to pursue constitutional change in Ireland, but ultimately, the realization of that objective will depend on a large-scale, coordinated effort to engage civil society and pressure people in positions of power

The conversation began with an appreciation for the historical role Irish Americans have played in various iterations of the Irish independence movement.

The modern relationship was formed in the 1840s, when Irish migrants established a significant presence in the United States for the first time in the country’s history, reshaping the way actors on both sides of the Atlantic engaged with Ireland.

“What drove people [from Ireland during the Great Famine] was the subjugation of Ireland by the British government in those days,” said Crowley. “Millions of Irishmen and women never lost the cause and the pining of their own country to be free.”

After the Good Friday Agreement, the movement lost much of its potency and appeal in the United States.

But Brexit has fundamentally changed the debate, opening new opportunities for people who aspire to unity in both Ireland and Irish America. Despite the United Kingdom as a whole voting to leave the European Union, Northern Ireland voted by a majority to Remain.

Nationalists argued that unity represented the best path forward for Ireland because it was the only long-term political solution that could guarantee the democratic wishes of the people of Northern Ireland. The European Union gave credence to this line of thinking when it publicly stated that Northern Ireland would retain its EU membership in the event of Irish unity.