Survivors, historians, and politicians are outraged after a member of the Mother & Baby Home Commission made her first public comments in an academic seminar on Wednesday. 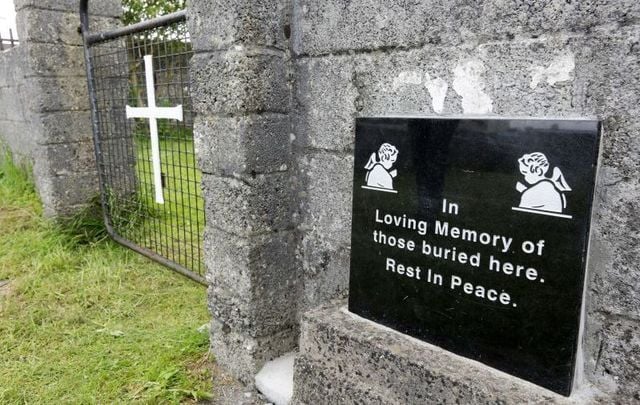 June 2014: The grounds where the unmarked mass grave containing the remains of nearly 800 infants who died at the Bon Secours mother-and-baby home in Tuam Co Galway from 1925-1961 rests. RollingNews.ie

The Final Report of the Commission of Investigation into Mother and Baby  Homes, published by the Irish government in January, has come under a fresh wave of criticism following comments made by Professor Mary Daly, who served as one of the three members of the Commission.

Speaking during a virtual seminar at Oxford University on June 2, Professor Daly said that the testimony of mothers and their children about their ordeal was not considered, as the report had to "meet robust legal standards of evidence.”

“If the report reads as legalistic," Daly told the seminar, "if the report doesn’t include some evidence that people gave to the confidential inquiry, there is a reason why it’s not there.”

Professor Daly's comments on Wednesday were the first public comments from a member of the Commission since the final report was published. Members of the Commission had been invited to speak before the Oireachtas following the report's publication, but have yet to do so. Survivors were not invited to the Oxford seminar, though some were able to register for it after hearing about it.

One survivor, Siobhan, told The Journal: “Professor Daly turned down the invitation to speak before the Oireachtas Commission about Mother and Baby Homes but sees it appropriate to choose to speak at this event with her peers instead.

“We survivors have so many questions that have not been answered, something that was not helped by the Commission being disbanded.”

Elsewhere in the seminar, Daly detailed the pushback she and the Commission endured from some of the institutions that were referenced in the final report.

“Tuam came with this extraordinary assertion... that those burial tanks were actually purpose-built burial vaults. The kind of thing you see in continental Europe used by royal and other families.

“Now, apart from the idea that a cash-strapped local authority would have constructed something like that in the 1930s...They had the nerve to send that back to us.”

She added: “There were attempts to kind of take all the data, and all the voluminous files we sent...and just blur the stories to muddy the messages.”

She acknowledged that running the confidential committee report alongside the inquisitorial part of the commission “was not a wise idea,” though that was not up to the Commission.

“I have spoken to my colleagues about how could we have integrated the confidential inquiry into the report. Well, first of all, it would have taken a lot of additional time. It would have taken hundreds of hours of cross-checking, re-reading against the other evidence available from registers, and so on. Then maybe interrogation… and then maybe working out how to integrate the two.”

Regarding the evidence they were presented, Daly said that, while emotional, "an awful lot of it was not particularly within our terms of reference.”

"We cannot let it stand"

On Thursday, in the wake of Professor Daly's comments, scores of professional historians added their names to an open letter to express their concerns about the Final Report. Among the signatories is Catherine Corless, who unearthed the scandal at the Tuam Mother and Baby Home.

The brief letter says in part: "On 2 June, Professor Mary Daly gave a seminar at the Oxford Irish History series and revealed what we had suspected, that the testimony gathered by the Confidential Committee was not weighted equally with other forms of evidence.

"It is clear from yesterday's seminar that the Commissioners made no attempt to adopt a survivor-centred approach to historical research, and that the history was written without consulting survivors’ testimony."

It continued: "No oral historians were consulted and, as a result, best professional and ethical practices were not followed.

"Charges of 'contaminated' memories were levied against survivors in the Executive Summary. Yesterday Professor Daly appealed to us to 'Let it stand'.

"We, as professional historians, cannot let it stand."

Sinn Fein TD Kathleen Funchion and Social Democrats TD Holly Cairns, who both sit on the Oireachtas Children’s Committee, have called for immediate action in the wake of Professor Daly's commentary.

Labour TD Alan Kelly raised the issue in the Dáil on Thursday, asking Tanaiste Leo Varadkar if he accepts that the Report needs to be repudiated.

Do you accept that the #MotherAndBabyHomes report needs to be repudiated? Or redone?@alankellylabour asks the Tánaiste about the devastating revelations after a member of Commission spoke at Oxford but refuses to come before Oireachtas Committee.

Varadkar said the Commission's decision to not engage with Oireachtas members and or survivors after the report was published "was not the correct course of action."

He said Professor Daly's participation in the seminar was "disrespectful" to the Oireachtas and to survivors, and said that "it is now necessary for the Commission  members to come before an Oireachtas committee as they've been asked to do."

Speaking on RTE Radio's News at One on Thursday, TD Roderic O'Gorman, Ireland's Minister for Children and Youth Affairs, agreed that Professor Daly's participation in the seminar was "not appropriate."

Echoing Varadkar's comments, O'Gorman said: "I think it is now at this point necessary for the Commission to come before the joint Oireachtas commission to speak to the report and clarify."

A spokesperson for Taoiseach Micheál Martin separately said on Thursday: “It would be very helpful, and the correct thing to do, for those who were on the Commission to engage with the Oireachtas Committee and to outline their perspectives on the inquiry.

“The survivors must be the number one priority. The Government is committed to following through on the recommendations of the report, in particular with the Information Tracing Bill, the Memorial Centre, the protection of records, and redress.

“We are working with the Minister for Children on that.”