The New York branch of the oldest Irish society in America is still cool on female members – but transmen are free to join. 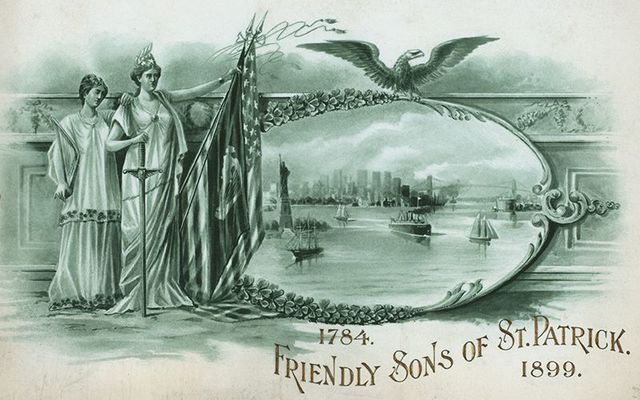 Illustration for a the 115th annual dinner of the Friend Sons of St. Patrick, where women are not welcome.

The Friendly Sons of St Patrick in New York is still cool on women members – but transgender men are okay.

The society is the oldest Irish organization in the United States, founded on St Patrick’s Day in 1771 and even counted George Washington as an honorary member. Dedicated to providing for the welfare of Irish immigrants it has a long history of tending to the Famine stricken and destitute.

Personally, McLaughlin favors allowing women but remains coy as to whether that will happen anytime soon.

“I think it might happen some day,” he said.

“We do discuss it as an option and I think that someday it will probably happen but at the moment the membership of the Friendly Sons would like to keep it all male.

“As generations move along people reevaluate the rules that they abide by within their society and at some point, it wouldn’t surprise me if the membership and the leadership did reevaluate the bylaws and rules of membership but I can’t make a prediction as to when that’ll happen.”

"Transgender men," he continues, "would not be precluded from membership – although he adds, “I haven’t given it any real consideration."

Two years ago the Philadelphia branch made news both in Ireland and America when it decided to admit female members in time for its 245th anniversary.

The then Irish Ambassador to the United States, Anne Anderson, became the society's first female honorary member to much fanfare and President Joseph Heenan said the change was “long, long overdue.”

Ninty-seven miles to the northeast however, the New York chapter still caps its membership at 1,000 men and change isn’t on the agenda in the immediate future.

Other than being male in order to join you also have to be of Irish origin, have an interest in Irish affairs “and you have to be a person of integrity, vouched for by two members.”

The branch organizes events that women are able to attend but still precludes them from membership.

Regardless, he does not believe many women would apply if the ban was lifted.

“I don’t see a tremendous amount of interest in the Irish female community to join the Friendly Sons of St Patrick, to tell you the truth.”

Like most societies, the Irish have a long history of gender segregation slowly wilting with the passage of time.

Read more: Things that Irish women could not do in 1970s

Generations of students at Trinity College, Dublin have wandered past a glum statue of Provost George Salmon who once proclaimed that only “over my dead body will women enter this college.” Fittingly, perhaps, he died in January 1904 – the same month the college applied to King Edward VII for permission to admit women.

Other institutes took longer to desegregate: it was not until the 1960’s that the college’s debating societies deigned to admit women.

A legal challenge to Ireland’s Supreme Court in 2009 found that such clubs do not breach  equality legislation.