Irish fishermen have hit out at the planned French military exercises off the coast of Ireland, but Irish and French authorities confirmed today that the exercises will be outside of the Irish EEZ. 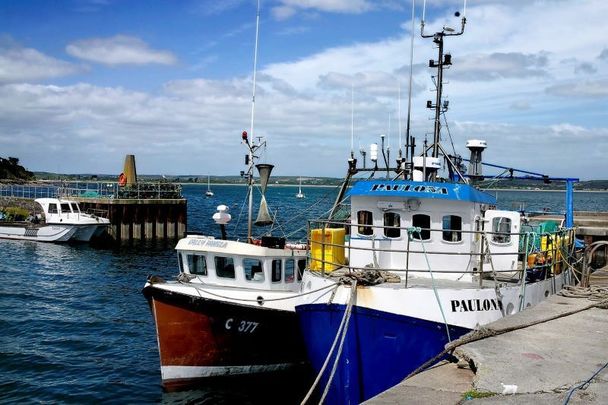 Fishing boats at Ballycotton Harbour, Ballycotton, Co Cork. Irish fishermen based in Co Cork have hit out at the French military exercises planned for this week. Ireland's Content Pool

Ireland’s Minister for Foreign Affairs Simon Coveney confirmed today, June 20, that the French military exercise scheduled to take place off the coast of Ireland in the early hours of June 21 will not take place in the Irish Exclusive Economic Zone (EEZ).

"I welcome confirmation from the French authorities that no French naval vessels will be within the Irish EEZ during this exercise," Coveney said in a tweet on Monday evening.

The confirmation comes a day after a group of Irish fishermen in the southwest of Ireland expressed concern about the military exercise and said they were discussing ways to disrupt it.

Coveney further said in a statement on Monday: "The Department of Foreign Affairs is in ongoing contact with the French authorities in relation to a military exercise planned later this week, taking place in an area of the Atlantic Ocean off the French coast.

“The full extent of the area that may be potentially affected includes a small piece of the southern extremity of Ireland's EEZ, approximately 200km southwest of Ireland territorial waters.

“The Irish Aviation Authority (IAA) was informed of the exercises via standard procedures and the Department of Transport has issued a Marine Notice to this effect.

“As a close EU partner, the Department of Foreign Affairs will, as normal, maintain contact with the French authorities throughout the period of the military exercise.”

Following discussions with our French colleagues, I welcome confirmation from the French authorities that no French naval vessels will be within the Irish EEZ during this exercise. ⁦@dfatirl⁩ 🇮🇪🇫🇷🇪🇺 pic.twitter.com/E7Xu7ZHyCF

The French Embassy in Ireland issued a similar statement on Monday, further confirming that “no French Navy vessels will be in the Irish EEZ during this exercise."

In its notice that was updated on June 20, Ireland’s Department of Transport said that it had been advised by the Irish Aviation Authority (IAA) of a missile / rocket firing exercise by the French military in part of the Irish EEZ to the southwest of Ireland.

The exercise is scheduled to take place from June 21 to June 24, as well as June 27, from 2 am through 4 pm each day. The warning noted, however, that the exercise may be postponed to another date within the June 27 - July 7 time period, excluding weekends.

Back in January,  a group of fishermen based in Co Cork gained international attention when they protested a Russian military exercise off the Irish coast. The same group is now expressing similar concerns ahead of the French exercise.

Patrick Murphy, CEO of the Irish South and West Fish Producers Organisation, said in a statement on Sunday that military sonar and live missile launches "have the potential to severely disrupt the annual migratory path of fish and dramatically interrupt the breeding season of mackerel and other migratory fish species."

He said that the opening of the albacore tuna fishery to Irish vessels on June 23 could "potentially be disrupted by these live-fire exercises, whilst also we believe this will cause untold damage to marine wildlife like whales and dolphins that are greatly affected by underwater noise."

Murphy said he and his organization had been discussing plans to disrupt the French exercise: “It is our understanding that live-fire exercises cannot take place if our vessels are engaged in fishing in the area, so we are discussing a plan with our vessel-owners and skippers aimed at once again carrying out a peaceful protest in our traditional fishing areas near the proposed area of the military exercise."

Murphy added that it "infinitely preferable if these naval exercises were stopped as a sign we in Europe are peaceful, and not looking to escalate the current tensions."

He said on Sunday that "at the very least," the military exercise should be relocated further south, well outside of the Irish EEZ "beyond our 200-mile limit and away from the men and women who sail their boats in our fishing grounds."

He added that the organization continues to call for "a moratorium of ten years [to] be introduced to stem these unnecessary military exercises, not just for any individual country but for all states that transit our waters."