The five male dholes arrived at the zoo from Tierpark in Berlin several days ago and are "settling into their new habitat very well", according to Dublin Zoo. 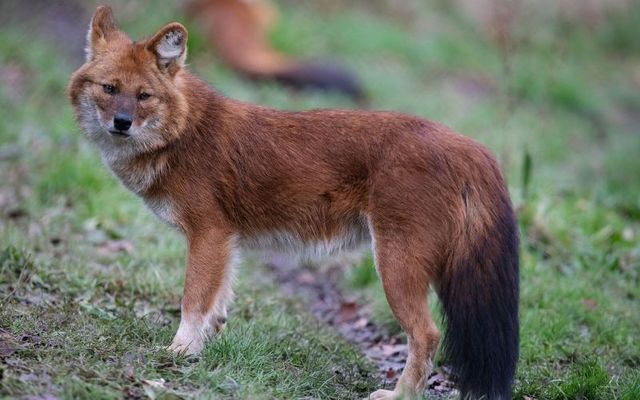 An endangered dhole at its new home in Dublin Zoo. Dublin Zoo Twitter

Dublin Zoo has announced the arrival of a pack of endangered Asian dogs known as dholes, marking the first time the species has been a resident in Ireland.

The five male dholes arrived at the zoo from Tierpark in Berlin several days ago and are "settling into their new habitat very well", according to Dublin Zoo.

Also known as Asiatic wild dogs, whistling dogs, or red dogs, the species is classified as endangered on the International Union for Conservation of Nature’s (IUCN) Red List.

Dholes were once widespread throughout Central, South, and Southeast Asia, but a loss of habitat, combined with a depletion of prey and disease transfer from domestic dogs, has forced the species to live in scattered populations in Bangladesh, Bhutan, Cambodia, China, India, Indonesia, Laos, Malaysia, Myanmar, Nepal, and Thailand.

Dholes reach the size of a German shepherd when fully grown but resemble a long-legged fox.

If you're visiting the new arrivals at Dublin Zoo this weekend, you may hear the pack of dholes before you see them as they're a very vocal bunch!

They have a broad variety of calls, including yaps, squeaks, screams, whines, growls, mews and chatters.

Ciaran McMahon, a team leader at Dublin Zoo, said he was "delighted to welcome" the species to Ireland.

"It’s the first time we’ve had this species at the Zoo so it’s an exciting time for all the team. We’re really looking forward for visitors to the Zoo to see the dholes and to get the opportunity to learn more about this type of wild dog," McMahon told the Irish Times.

McMahon said there were between 4,500 and 10,000 dholes left in the wild and said it was "hugely important" to have them at Dublin Zoo to help raise awareness and educate the public as part of a global effort to protect the species.

The dholes are located in the Asian Forests section of Dublin Zoo and can be identified by their wide variety of calls, including yaps, squeaks, screams, and whines.