Dublin remembers 9/11 with moving event at US Ambassador's residence

Irish and American politicians, as well as members of the Dublin Fire Brigade, attended the event in Dublin just days before the 20th anniversary of 9/11. 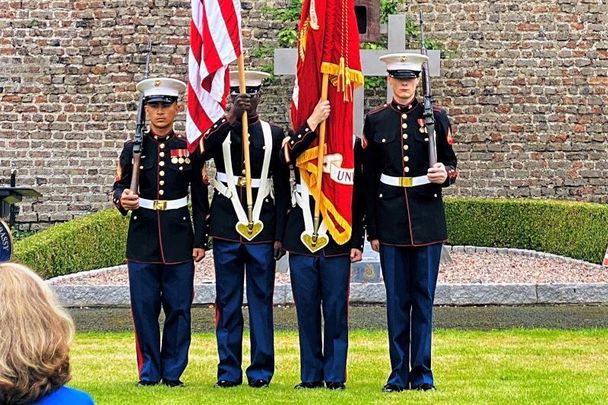 9/11 remembered at the US Embassy in Dublin on September 9, 2021.. @USEmbassyDublin, Twitter

A number of prominent figures gathered at the US Ambassador's residence in Dublin's Phoenix Park on Thursday for a moving ceremony that honored the 2,996 people who perished in the 9/11 attacks 20 years ago.

The moving event took place on the grounds of the US Ambassador's residence and was opened by Irish singer Paul Byrom, who sang both the Irish and American national anthems.

Today the Embassy marked the 20th anniversary of the #September11 attacks, in front of the 9/11 Memorial Monument at the US Ambassador’s Residence. Thank you to our partner @DubFireBrigade 🇮🇪🇺🇸 #NeverForget pic.twitter.com/cMfw1YBqkJ

Ahern, who was Taoiseach at the time of the attacks 20 years ago, told people gathered at the event that he would always remember where he was on 9/11.

"As we continue to remember as the years go on so that new generations will understand the horrors of terror and of terrorists, of ideological people who tried to lead people to do terrible things in the world where most people just want to live," he continued.

Thanks to @paulbyrom for your powerful rendition of the Irish and US anthems at today’s #September11 memorial ceremony 🇮🇪🇺🇸 pic.twitter.com/gRLGkkoDu7

Acting chief officer of the Dublin Fire Brigade Dennis Keeley also addressed the event and said that the pain of 9/11 is still as raw for many people as it was 20 years ago.

"It’s 20 years since the terrible events of 9/11, and in that time events may have faded in the memory of some," Keeley said. "But for so, so many, the pain of those events are as raw and as painful as they were 20 years ago."

We were honoured to be invited to the @USEmbassyDublin 20th anniversary memorial of the #September11 attacks at the American Ambassador's residence this morning.

US charge d'affaires Alexandra McKnight additionally addressed the ceremony and spoke of the everlasting solidarity and friendship between Ireland and the USA.

"Our bond throughout history’s triumphs and tragedies has been unbroken, and our common roots grow deeper every year," she said.

"When history visits America, as it did 20 years ago, the impact here in Ireland is immediate, and so is our solidarity."

McKnight, who is the most senior diplomat in the US Embassy until Claire Cronin takes up the role as Ambassador later this year, defended President Joe Biden over his handling of the war in Afghanistan.

"As President [Joe] Biden pointed out, no nation has done this in the whole of history and this was thanks to the incredible skill, bravery, and selfless courage of the US military and of our diplomats and intelligence professionals," McKnight said at Thursday's event.

She added that four US officials stationed in Dublin had flown to Afghanistan at a "moment's notice" when the Taliban took control of the country in August.

"These selfless stories of dedication are inspirational. They are part of a line of courageousness that goes all the way back to 9/11."