James McGill's friends and family have launched a GoFundMe to support the 33-year-old's medical treatment. 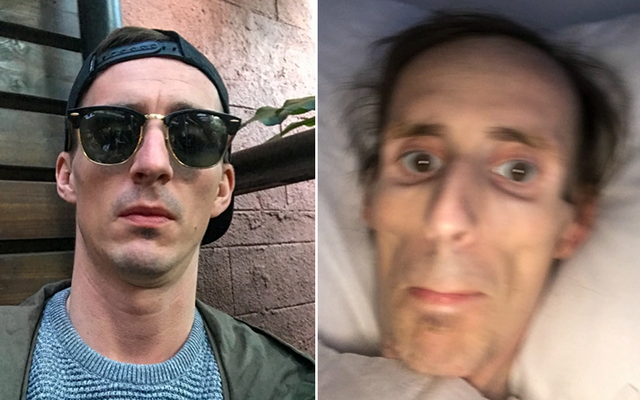 James McGill (33) before his illness and at the height of his battle. GoFundMe

James McGill from Dublin was told he had 24 hours to live now he's fighting for his life and planning to move home.

A 33-year-old is battling for his life after months in hospital having been diagnosed with a rare blood cancer when his arm, which he'd broken, failed to heal.

James McGill, a Senior Account Manager at Google, in Dublin, was admitted to hospital when he sought medical attention in December 2019 for his arm which was failing to heal properly following a break. McGill broke his arm two years ago. The break had never healed properly and he was having ongoing complications.

The young man realized that he was tripping over more often and then that he was losing power in his left leg. He also lost the ability to swallow or drink.

In January 2020 he saw consultants and following an MRI he was told he had a lesion on his brain, which was later diagnosed as lymphoma, a form of blood cancer.

Now four months later McGill is looking forward to moving home. His friends has set up a GoFundMe page to raise $64.2 (£50k) which they plan to spend on making his home more "liveable".

Speaking to the Daily Mail, McGill said "I broke my arm a couple of years ago, but it never seemed to heal properly.

"I slowly started to lose movement in it so went to see a few consultants, but they didn't really have an answer.

"Last December I slowly started to lose power in my left leg and found myself tripping up a lot. So I booked myself in for an MRI scan and they found a lesion on my brain."

He remembered the moment he heard the news while he was at his parent's house.

"I took the call and just broke down in my dad's arms when I told him what it was.

"It wasn't long after that when I lost the ability to swallow or drink.

"They did an operation to find out what it was, and it turned out to be lymphoma. I've been bed-bound ever since."

Due to the COVID-19 pandemic, for a while this year, his only visitors have been his parents.

He said "I couldn't even tell them in person because they weren't allowed in that day. I had to tell them on FaceTime.

"At one point the doctors said I had 24 hours to live – but I didn't know anything about it. I was hallucinating that I was having dinner with Kim Kardashian in London.

"Somehow I managed to pull through, and I think I'm slowly getting a bit better.

"I had multiple rounds of chemo which was a huge battle on the body and mind. Each time I fought hard. The medical team here in Beaumont [a Dublin hospital] have been amazing.

"I now want to get home for Christmas. That's the target. After where I was, it would mean everything if I could do it.

"The house needs loads of adjustments to make it livable. I'll need hoists on the ceiling, extensions downstairs, it'll be a lot of work.

"My friends set up the GoFundMe to get me some presents because they knew I was miserable and I had told them I didn't like the hospital towels.

"It's overwhelming to see how much money has been raised so far. It's really given me a boost over the past few days because it shows how many people are in my corner."