In one of the largest deals in Irish biotech history, Inflazome, based out of Trinity, has been sold. 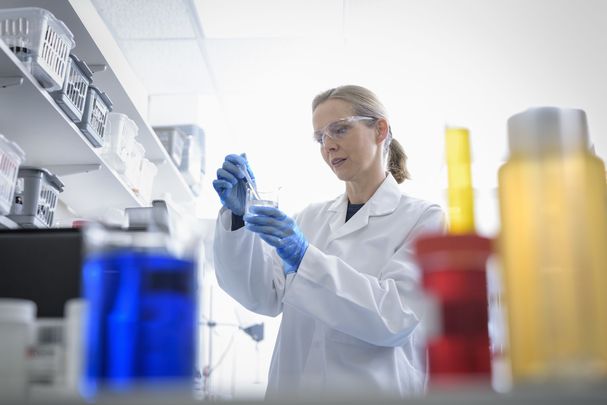 "Roche can now take out drugs and bring it to the clinic which is tremendously exciting. We're talking about Alzheimer's, Parkinson's, Cardiovascular disease." Getty

The Dublin-based drug sells opening treatment of Alzheimer's, Parkinson's, and cardiovascular disease to the market.

An Irish company that develops treatments for inflammatory diseases, a collaboration between Trinity College Dublin and the University of Queensland, has been sold for an up-front payment of $446m (€380m) from Roche, plus additional payments based on the achievement of certain milestones.

Inflazome, founded in 2016 following a research collaboration between the University of Queensland and Trinity College, has been sold for $446 million. The sale of this Dublin-based company marks a sevenfold return for venture capital investors who have pumped €55 million into the business.

The company is developing drugs to address clinical unmet needs in inflammatory diseases by targeting inflammasomes, which are understood to drive many chronic inflammatory conditions. The acquisition gives Roche full rights to Inflazome’s portfolio of inflammasome inhibitors.

Professor Luke O'Neill, Co-Founder of Inflazome, said the sale marked a great day for the company.

"Roche can now take out drugs and bring it to the clinic which is tremendously exciting. We're talking about Alzheimer's, Parkinson's, Cardiovascular disease- all these inflammatory diseases seem to involve one thing that goes wrong in your body.

"We have a drug that can correct it so it's a great day for the company."

Professor Luke O'Neill said his company - now acquired by healthcare giant Roche for €380m - hopes a medicine they developed can stop diseases such as Parkinson's and Alzheimer's 'in their tracks'. @PatKennyNT @laoneill111 https://t.co/YvXYy9lAWx

"This is an outstanding outcome for the company, both universities, the researchers, and the investors.

“Now more than ever, the value of research translation to support the recovery of our economies cannot be understated. This deal reinforces the importance of research collaboration and shows what can be achieved through commercialization."

Read more: Could hemp and a return to our roots be the answer to Ireland’s farming prayers?

Trinity College Dublin Provost Dr. Patrick Prendergast added his congratulations. "This is wonderful news, first and foremost for the many people across the world with diseases like Parkinson’s who stand to benefit from these discoveries.

“It is also a boost for the Irish scientific community and for Trinity College Dublin, where the ideas originated that led to the collaboration with UQ and the subsequent foundation of Inflazome. “Investigator-led research drives the innovation economy and this news offers tangible evidence of its importance and also what can be achieved through partnership. We congratulate all the researchers involved for their tireless commitment to discovery and innovation and for making a real difference in society."

In a joint statement, UniQuest CEO Dr. Dean Moss and Trinity Research and Innovation Director Leonard Hobbs said the deal echoed global market confidence in the quality of research at Trinity and UQ.

"This is one of the largest Australian and Irish biotech deals and follows the company’s Series B capital raise of A$63 million in 2018. It’s wonderful to see it eventuate, bringing much-needed treatment options a step closer to reality.
Two of the company’s drug candidates are in clinical trials for the treatment of debilitating conditions such as cardiovascular disease, arthritis, and neurodegenerative diseases such as Parkinson’s, Alzheimer’s, and motor neuron disease."

The IP behind Inflazome’s drug candidates is based on a research partnership between Professor Matt Cooper, Professor Kate Schroder, Dr Rebecca Coll and Dr Avril Robertson from UQ’s Institute for Molecular Bioscience and Professor Luke O’Neill from Trinity College Dublin. Inflazome is supported by a syndicate of investors, including Novartis Venture Fund and Fountain Healthcare Partners, Longitude Capital and Forbion.