Ken Casey suffered a wound on his head after someone threw a can at him during a Dropkick Murphys show in Boston. 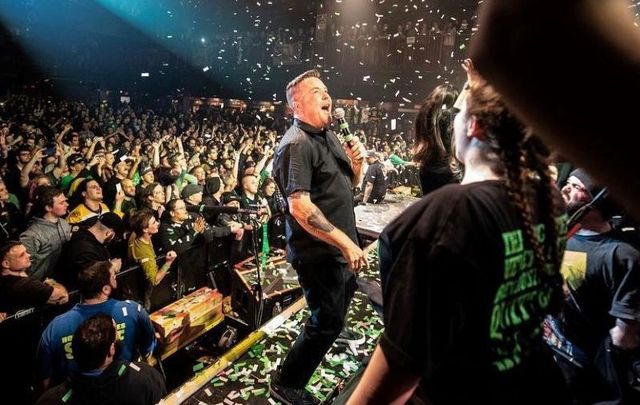 Ken Casey at House of Blues in Boston DropkickMurphys, Instagram

Casey was struck in the head when a fight broke out at one of the band's St. Patrick's Day weekend shows at The House of Blues in Boston

Dropkick Murphys' bassist Ken Casey was involved in a scuffle while performing in Boston as part of the band's St. Patrick's Day weekend show lineup at The House of Blues.

Speaking with The Boston Globe, Ken Casey said of the March 15 incident: “Basically, guy was attacking fans and I was trying to defend them.”

“Security can’t always see what is going on three to four feet back, but we can . . . that’s about the size of this.”

“Me and the guy got into it a little bit, and before anything really happened someone threw a beer at my head and split my head wide open,” Casey said.

“I’m good — not the first or last time I will be hit with a projectile.”

Read More: Flogging Molly and The Dropkick Murphys kick off joint US tour

On Instagram, Casey shared a video of a can being thrown at his head during the scuffle:

Great night of fights @murphysboxing @hobboston show last . Although the shot of the weekend definitely goes to this sharpshooter who got me square in the forehead from 10 paces with a full beer #hazardsofthejob . Thanks to everyone who has attended this weekends festivities so far and congrats to the #murphysboxing fighters who all had massive victories last night. Looking forward to the grand finale tonight - DKM- St Patrick’s Day at the HOB ☘️ photos by @joekelleyphotography and @annienyhc

TMZ has shared video of the incident, which reportedly broke out after the band noticed a man hitting women in the crowd at their show.

After the incident, lead singer Al Barr said: "We've been doing this for a number of years, and having been here for 21 of those years, I can tell you this is not new."

"When we invite you guys to come to one of our shows, it's like we're saying come to our house. And when someone disrespects us, you're disrespecting us in our house."

In 2013, Casey made headlines when he punched a man at a Dropkick Murphys show at Terminal 5 in New York City for allegedly giving a Nazi salute.

Have you been to a Dropkick Murphys show before? Let us know in the comments!