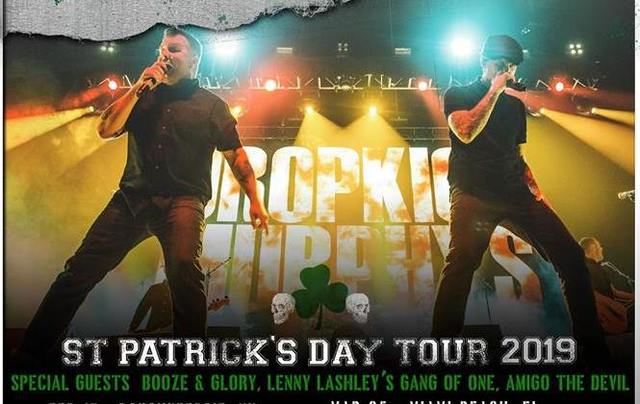 Dropkick Murphys will be hitting the road for a month-long tour of North America early next year ahead of St. Patrick’s Day.

"Pack up the van (okay, okay, it’s a bus), we’re rolling again and looking forward to bringing the party to your town this February and March 2019,” says bassist/vocalist Ken Casey.

“It’s our favorite time of year to play for the best, most dedicated fans on Earth. God bless you all. We promise to leave it all on the stage again this time around!!!!"

Supporting the Dropkick Murphys on some of on their North American tour dates are Booze & Glory, Lenny Lashley’s Gang of One, Amigo the Devil, The Interrupters, Stop Calling Me Frank, and The Devil Makes Three.

Tour dates begin on February 17 and wrap up - fittingly - with a show on March 17th, St. Patrick’s Day, in the group’s hometown of Boston.

On March 16th, however, the band will be hosting a full day of events including two performances in Lowell, Massachusetts.

Read More: Flogging Molly and The Dropkick Murphys kick off joint US tour

Following their St. Patrick’s Day tour, the band will take a much-deserved rest before they head abroad where they’ll kick off their European tour at Dublin’s Vicar Street on April 17th.

Tickets are now on sale for the following Dropkick Murphys 2019 tour dates:

Have you been to a Dropkick Murphys show before? Let us know in the comments!