Flogging Molly and The Dropkick Murphys kick off joint US tour

Now in their third decade in the business, Flogging Molly lead singer Dave King talks of his evolution from “pisspot poor” Dubliner, to undocumented Irish immigrant, to touring all over the world with the band. 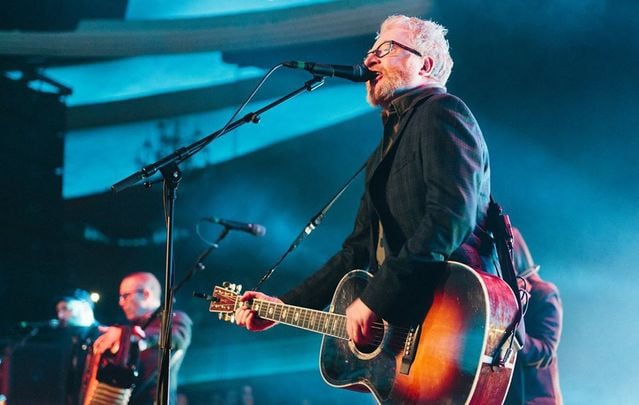 Flogging Molly and The Dropkick Murphys summer 2018 tour of the US East Coast begins tonight with a sold-out show in Cleveland, Ohio.

After Dave King’s record deal fell through following his big move from Dublin to Los Angeles, he hit rock bottom, remaining in the US as an undocumented immigrant and unable to return back to Ireland. On Friday, June 1, as the lead singer of Celtic punk sensations Flogging Molly, he'll kick off the start of a summer 2018 tour alongside The Dropkick Murphys, an opportunity he may never had even dreamed of when he’d picked up his guitar and headed to local pubs to play while stranded in the US.

“I grew up listening to The Dubliners and my Dad was a huge Dubliners fan. It was one of those things that when I went to America, I hit rock bottom and I couldn't go home,” King tells IrishCentral.

“I started listening to all that music again. I remember listening to The Dubliners and The Pogues and thinking, ‘maybe there's a way for me,’ even if I couldn't go back home.

“I was illegal, I couldn't leave the country, but maybe there was a way for me to go back home. It may not be physically, but maybe musically. I can take what I've learned over the years and put my twist on it and then when I heard Bridget playing fiddle [King’s fellow Flogging Molly band member and wife], it really solidified that. I thought 'ok, this is what we have to do' and that's when it became its own thing.”

Twenty-one years on and Flogging Molly are still doing their own thing and doing it all over the world, with European tours, an English tour and a west coast US tour already lined up for the rest of 2018.

While Dave and Bridget have now moved back to Ireland to live in a farmhouse in Wexford, he still counts his Dublin roots as one of his inspirations and one of the main aspects of his life that drove him musically, alongside his music-loving parents. Having lost his mother during the making of Flogging Molly’s last album “Life is Good,” it was her words in encouraging her son to enjoy life, even through the worst of times, that pushed him through.

“I think that's why I enjoy the good times so much because there were plenty of hard times and it's made me appreciate how lucky we are to be doing what we’re doing,” admits King.

Our 2018 Summer Tour with @dropkickmurphys begins tonight with a sold out show in #Cleveland! 📷: @tijsvl

“My mother was a huge influence. We lived on Beggars Bush before it was very hip to be around that area, will we say. My father died when I was ten so it was brief encounter but they used to go to the pub every Saturday night and they'd bring back the whole lounge with them.

“We had a piano. We only had one room but we had a piano in the room and my Mam would get behind the piano and everyone would sit on the floor because there were no chairs and everybody would sing, including me.

“Then my Mam and Dad, when I was about 8 or 9, bought me a guitar. A very rare thing that they wanted me to play music because that's all we had back then. We'd no money but the only thing that brought us any joy in life was playing music and they instilled that in me without a shadow of a doubt. I've been at it ever since.

“As a child there definitely was a celebration,” King continues.

“Everybody in that room in Beggar's Bush was pisspot poor, not a penny to fucking rub together, but sitting around singing songs. The celebration was brilliant and I think that's the core of my musical existence and how I look at music.”

And while he admits that Ireland may not be as appreciative of the work of Flogging Molly as other places, the band still do their best for Irish musicians, bringing the likes of the Might Steph and The Minutes on the road with them when they can to help promote the Irish music that they evidently still feel all to passionately about, despite now entering their third decade of a sometimes gruelling touring schedule.

“You'll always have people playing Irish traditional music in pubs and stuff like that but will you ever have anybody who's taking it as we are, and as The Dropkick Murphys are? No matter what you think of it, at least we're going to South America, Russia, Japan, all over Europe, all over America playing sold out shows to young people,” says King.

“First of all, we get absolutely no recognition for that back home. They wouldn't spit on us over there and what's ironic about that is the fans in Dublin are probably some of the best.

“People tend to look at Irish music, for want of a better phrase, as diddly-eye but I don't think what we do is remotely anything like that. We have lyrics on gravestones in America, that families have put on gravestones. That's not diddly-eye, that's soul music.

“We really believe in what we're doing and we're so passionate about it. It's changed all our lives.”

Will you be going to the Dropkick Murphys and Flogging Molly 2018 summer tour in North America? Let us know in the comments section, below.