Irish man Damian Browne is close to completing a grueling 5,000 km journey from New York City to Galway after rowing continuously for the past 112 days. 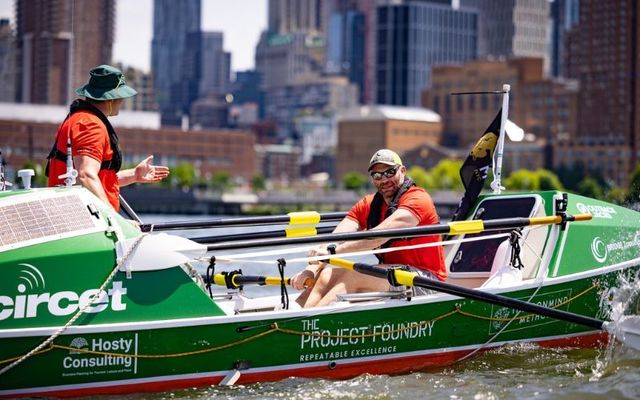 Irish men Damian Browne and Fergus Farrell at the beginning of their voyage in New York. Emilija Jefremova

Damian Browne, who played professional rugby for Connacht and Leinster, said he is"incredibly excited" to complete his journey home across the Atlantic Ocean and rejoin his wife and 14-month-old daughter.

"After 112 days of stresses, strains, and doubts only an endeavor like attempting to row 3,000 miles across the unforgiving North Atlantic can elicit, I’m incredibly excited to close out this beautiful project in my hometown, surrounded by my family, friends, and supporters; making my dream a reality," Browne said in a statement.

Browne has previously rowed across the Atlantic Ocean in the opposite direction, rowing from San Sebastian in Spain to Antigua in the Caribbean in 2018.

Commenting before the start of his current journey, Browne remarked that this challenge would be harder in the absence of his wife and daughter.

Browne has survived a number of capsizes during the grueling crossing.

He set off from New York on June 14 with his lifelong friend Fergus Farrell, who miraculously recovered from an injury that gave him a 5% chance of ever walking again.

However, Farrell was forced to pull out of the endeavor after 13 days after his oxygen levels dropped to 86%, leaving him at risk of blood clots.

The two men had been swapping shifts to row 24 hours a day before Farrell's withdrawal. They packed 65 days' worth of freeze-dried rations for their trip, heating the food with boiling filtered ocean water powered by solar panels.

However, Browne has been surviving on cold food for several weeks after losing equipment during storms and heavy weather.

Those storms also blew him off course, meaning he has rowed 3,400 nautical miles instead of 2,600.

Browne and Farrell had been attempting to break the Guinness World Record in their purpose-built 6.2-meter Seasabre craft prior to Farrell's withdrawal.

The pair are raising money for the National Rehabilitation Hospital Foundation, Ability West, Madra, and The Galway Simon Community.

Browne, who has dubbed the challenge "Project Empower", said he is seeking to inspire younger generations in Ireland to "dream big and work hard".

"The great hope with this was to give the next generation of kids in the west and throughout the country a real image and touchable action to emulate and hopefully inspire them to dream big and work hard in whatever avenue of life they decide to explore," he said.

Browne said he could have landed at Kerry several days ago but his desire to become the first person to row solo from New York to Galway has inspired him to forego hot showers and hot food for a few more days.

He is expected to arrive in Galway on Tuesday morning at 10:45 a.m. when Galway Port harbormaster Captain Brian Sheridan opens the lock gates.

Browne, who passed Loop Head in County Clare on Sunday evening, will be greeted by bonfires on the Aran Islands as he approaches Inis Oírr, the southernmost of the three islands.

A flotilla of vessels is planned to accompany Browne for the final 30 miles of his journey on Thursday morning.