Darragh Carroll, 25, set sail from the Norwegian island of Tromoya six months ago aboard a traditional wooden Norwegian sailing boat called the Ran. 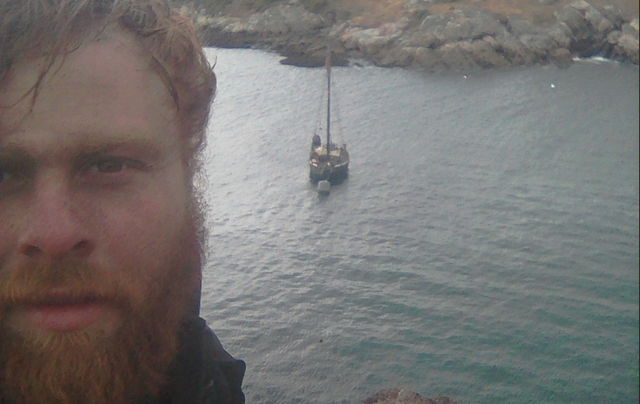 An Irish sailor is close to completing an epic six-month solo voyage that took him from Norway to Ireland while carrying a mythical Norse flame back home.

Darragh Carroll, a chef from County Dublin, set sail from the Norwegian island of Tromoya six months ago aboard a traditional wooden Norwegian sailing boat called the Ran. Carroll explained that Ran was the God of the Sea in Norse mythology.

Carroll said that the inspiration for the trip came when he lit a fire in the woods on Tromoya - an area connected to the Vikings. He said that it would be fitting to bring the fire from Tromoya to the Hill of Uisneach in County Westmeath - an ancient Irish ceremonial site.

He planned to be home for Christmas, but inclement weather slowed his progress before heavy storms in January placed him in mortal peril and threatened to completely scupper his voyage.

He began his journey by traveling from Tromoya to the Norwegian port of Hugueasund before making a three-day voyage across the North Sea to the Scottish Shetland Islands.

From there, he traveled to the Orkney Islands and planned to head for Mainland Scotland.

It was as he headed for the Scottish mainland that Carroll experienced disaster.

As he rounded Cape Wrath in northwestern Scotland, he was caught by a flood tide during Storm Brendan - a huge storm that hit Ireland and Britain in mid-January.

The lone Irish sailor said that he could barely stand up on the ship's deck and he lost control of the boat due to the powerful wind.

Rather than battle through the storm, Carroll decided to steer the ship to safety and he made for the relative shelter of nearby Lough Eriboll.

He still encountered massive difficulties trying to steer his vessel in the right direction in the middle of the storm.

Running low on fuel, Carroll had to enter the lough by sail and he soon found that the lough was not the safe haven he anticipated.

Strong gusts of wind actually took the ship's anchor out of the water as he attempted to anchor in the southern part of the lake, Carroll said.

He then decided to bank the boat on a nearby beach but experienced further problems. The powerful winds eventually caused the boat to capsize around 20 yards from the shore.

"I started to do everything I could to keep the water out but it just was filling too fast," Carroll told the Northern Times in January.

The 25-year-old was forced to abandon ship and brave the stormy waters in order to get safely to shore.

"I decided to abandon it, so I put on a survival suit, jumped into the water and swam the 20 meters to shore."

Carroll found shelter in an unused holiday home, where he was able to gain access without causing any damage.

Locals noticed suspicious activity in the holiday cottage the following morning and called the police who contacted the owner.

Fortunately for Carroll, the owner was pleased that he was able to find accommodation during the ordeal.

Owner Andrew Adamson told the Northern Times: "Our first concern was for the wellbeing of this intrepid sailor, and we are pleased that our little cottage was able to offer him shelter during what must have been a terrifying ordeal."

The police, along with a few helpful locals, brought Carroll food to provide sustenance before a team of locals helped him and the coastguard remove the vessel from the water in a grueling 14-hour operation.

"It was incredibly inspiring to see such helpful, hard-working locals willing to stand in the rain from morning to night to help me," Carroll said at the time.

However, while the ship had been successfully recovered, there was still a task at hand - repairing it to a satisfactory level in order to complete the rest of Carroll's journey.

He spent two months working on the vessel, but the flooded engine proved to be beyond repair, so he was forced to complete the remainder of his journey on wind power alone.

Despite the difficulties he has faced on his journey, Carroll has kept the Norse flames lit throughout his voyage.

Now that he is almost back in Ireland, he plans to rest for a few days before completing his journey to the Hill of Uisneach.