Cork Street Names Campaign said “To honor the name of Victoria, the Famine Queen... is an insult to the dignity of the Famine victims." 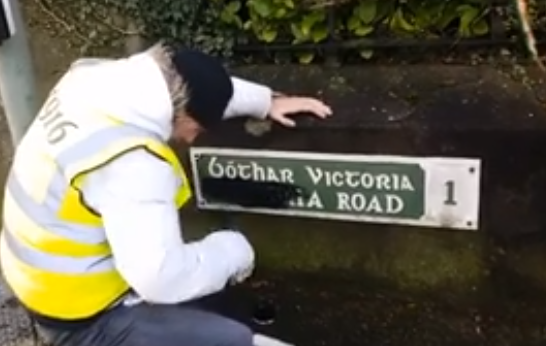 A Cork City councilor has said is prepared to go to prison for painting over street signs in Cork named in honor of Queen Victoria - the so-called ‘Famine Queen’.

Two others from the Cork Street Names Campaign have also been charged with criminal damage after they posted online a video on them painting over signs for streets named after Queen Victoria.

Cllr Diarmaid Ó Cadhla, Tom O’Connor and Tony Walsh of the Cork Street Names Campaign said they painted over the signs as, “To honor the name of Victoria, the Famine Queen, in the street names of Cork is an insult to the dignity of the Famine victims and to the self-respect of the people today”.

Supporters of the Cork Street Names Campaign painted over the name of Victoria on street names in Cork city. Victoria was the Famine Queen, she presided over genocide against our ancestors. Those involved wanted to alert the conscience of our fellow Irishmen and Irishwomen to this continuing insult to our own dignity and self-respect. This act of civil disobedience has been greeted by vindictive arrests and will probably lead to prosecution of the individuals involved - all of whom freely admitted their role and are willing to face the courts. There are many famine 'graves' in Cork, there are over 30,000 people buried in the one on Carr's Hill, it was always referred to as "Carr's Hole" - it had been opened by an enterprising Mr Carr who got paid for dumping human bodies into a hole on his land. These are the forgotten victims of Ireland's Holocaust, so named by Michael Davitt of the Land League - millions were forceably starved and dispossessed of their homes and land. A thousand SHAMES on Cork City Council that there is no memorial in Cork city centre to remember these victims of foreign enslavement and national betrayal.

In a statement on their Facebook page the group said, “The three intend to defend themselves in court, stating that their actions were not criminal, but that it was an act of conscious objection to the honouring of a person who ruled over a genocide against our ancestors.

“All three of us are looking forward to our day in court, the pity is that the City Council has even brought a prosecution – rather than open a public debate on this issue of street names.”

Ó Cadhla concluded, “there are no streets in Poland or France named after Nazi generals, and there would be outrage at even the suggestion of it, we need to get modern and get rid of the old colonial names.”

In court Ó Cadhla was denied his request that the whole the case be conducted in the Irish language but told he could give his evidence through Irish if he wanted.

The case against the trio was adjourned until December 4th at which point a plea must be entered.

Read more: An inconvenient truth: Queen Victoria was welcomed by the Irish during the Famine

Speaking later to IrishCentral Ó Cadhla admitted he expected them to be found “probably guilty” by the court but said it was a matter of principle and he was prepared to go to prison “if necessary”.

He said the group originally sought a meeting with the local council but when nothing came of that they concluded, “What’s left but civil disobedience!”