Tommy Traynor, a native of Armagh and a lifelong advocate for the GAA, passed away in his adopted home of New York on March 3 surrounded by his loving family. He was 85 years old. 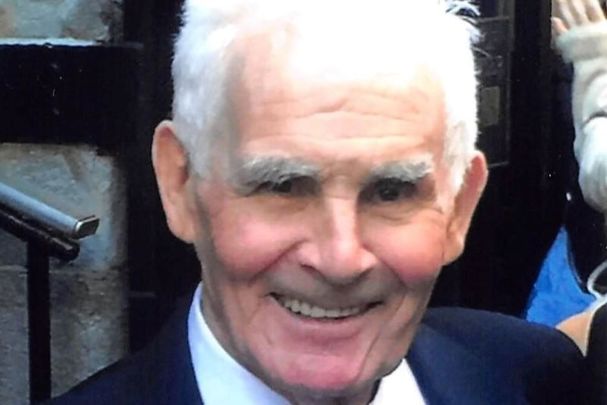 Tommy Traynor was born in Silverbridge, Co Armagh, and was the youngest son in a family of four boys and three girls.

The young lad from the Orchard county began his education and Gaelic football career at the local Glassdrummond school. Tommy was a member of the first football team hosted by the school, and it was here that his love and passion for Gaelic games began.

He continued to hone his football skills as he progressed through the minor and junior ranks of the Silverbridge club to make his debut with the county team in 1955. The next year Tommy emigrated to England, but his sojourn there was of short duration as he was soon back in the Silverbridge colors. He captained his native team to a junior championship in 1959, and Tommy would go on to represent Armagh at junior and senior levels.

In 1961, he was on the move again, this time to the United States, and over the next four decades, Tommy would have had a profound impact on the GAA landscape in the Big Apple. In 1965, he married Kathleen O’Sullivan, a native of Borlin, Bantry, Co Cork, and also a member of a family steeped in Gaelic traditions.

The Traynor family would eventually expand to six children, 14 grandchildren, and one great-grandchild. For over 35 years, Tommy and Kathleen, along with her brother James and his wife Scotty, would operate the Tara Irish Gift Shop in Inwood, a provider of an array of Irish products, and of course, the local Irish county papers.

Upon arriving in New York, Tommy quickly immersed himself in the GAA network, starting as a player with the Louth Celtics and later with the New York Celtics and Armagh. During his half-century of intensive involvement with the GAA, he would have held an array of positions that included player, manager, coach, trainer, mentor, president, delegate, and transporter, and he was a noted referee as well.

As noted, 1965 was a memorable year for Tommy, but it would also become a watershed one for the New York GAA. The Immigration and Nationality Act of 1965, signed by President Johnson, though well-intentioned, had the unintended effect of nearly closing the door to generations of would-be Irish immigrants. That slowed the flow of hurlers and footballers to a trickle, leaving county clubs on borrowed time if something radical wasn’t done.

Our deepest condolences to the Traynor family on a great gael. Tommy was hugely involved with the NY GAA Scene,...

Thankfully, a few people such as Tommy Traynor had the foresight to see that the future lay in reforming the New York Minor Board. A number of clubs sprang up, among them were the Celtics, with Tommy as a founding member. A belated 50th anniversary of the club is being celebrated next month, but sadly Tommy won’t be there for the club that he laid the foundation for and nurtured to become the vibrant entity that it is today.

Tommy and his like-minded ilk determined that the Minor Board would be the pipeline to the future rather than the Aer Lingus jet. I think the St. Barnabas club adequately answered that question. Tommy certainly became a champion of the young American-born players, and hence should be given the opportunity to develop like their more revered peers on the other side of the Atlantic.

Though we had the “No Child Left Behind Act” here a couple of decades ago, Tommy has his version of no child left behind especially if they wanted to play Gaelic football. It wasn’t unusual to see a big blue suburban-type vehicle cruising around picking up young players to play for the Celtics.

Meanwhile, when this wanderly wagon got to Paddy’s Field, Gaelic Park, or Rockland, there could be the guts of a team on board. With lots of family help, principally from his brothers-in-law Donie O’Sullivan, Jimmy O’Sullivan, and John and Mary Cox, Celtics became a formidable force at all levels on the playing fields.

After using a few under-18 and 21 titles as a springboard, Celtics made the breakthrough at adult level when they won the Junior B Championship title in 1987. In the nineties, the Celtics battled in the Junior A ranks, being defeated finalists in ’93 and ’94, though Tommy might have a bit of cognitive dissonance or divided loyalty as Armagh were the victors.

However, there were no doubts, issues, or reservations when Celtics captured the Junior A title in 1996 against Cavan. This victory was a major joy for Tommy because his three sons were involved, Thomas, Kieran, and Aiden, plus his two nephews, Danny O’Sullivan and Kenny Cox.

In the ‘90s when I managed Leitrim, Celtic players such as Danny O’Sullivan, Kieran Traynor, John Walsh, and Pat Donoghue won senior championship medals as well. Celtic, an All-American-born squad would perform at senior ranks for many years, with Tommy being a very vocal and visible presence along the sideline.

Of course, I couldn’t forget Allison when she played with the great Cavan Ladies team and the New York team as well. Though Tommy and Kathleen’s children have now hung up their cleats, the Traynor presence is still very much to the fore as a new generation of Traynors, Cronins, and Tierneys strut their stuff the way their grandfather did over 60 years ago.

On close observation, you can nearly see some of Tommy’s trademark tricks, the swagger, dummy, and sidestep as he soloed through the defense. In his later years when he was gone from the sideline and dressing rooms, he still maintained a great interest in GAA affairs on both sides of the Atlantic.

Ned Devine’s became the site for post-game analysis, with the panelists being Seamus Dooley, RIP, Danny Doohan, RIP, Donie O’Sullivan, and of course the late Tommy. By all accounts, the debates were lively and quite argumentative at times, with the moderator Scan being kept on his toes.

The requiem Mass was celebrated at St. Barnabas Church in Woodlawn on March 5 by the pastor, Father Brendan Fitzgerald. In modern culture, churches tend to be mostly forgotten or forsaken places. Well, that wasn’t the case on Saturday as the pews were full and people stood shoulder to shoulder in the aisles and vestibule, while a few hundred more stood outside on the stoop and sidewalk. I have been in the neighborhood for close to 50 years and I have never seen such a crowd.

A lovely touch from our seniors tonight, wearing NY Celtic and NY jerseys to remember Tommy Traynor. Armagh also flew with the American flag at half mast. RIP Tommy

According to the adage, a picture is worth a thousand words. Well, this one was worth several thousand. It spoke volumes about the stature and standing this man had in the community and the impact and influence he had on so many people through his commitment to the GAA and the wider community.

Father Brendan noted that while funerals are rightly regarded as occasions of sorrow and bereavement, they are also a celebration of a person’s life and good deeds. The celebrant also alluded to the countless hours Tommy devoted to the GAA throughout his lifetime.

Of course, the bedrock value of the GAA is volunteerism, and Tommy was a wonderful exponent of that, and as Father Brendan said a massive role model and a legend. In a heartfelt homily, he said that Tommy’s life could be encapsulated with the 4Fs, namely his faith, family, football, and fatherland.

The symbols of Tommy’s life certainly accentuated that. Among them were the pioneer pin, as Tommy was a lifelong member of the Pioneer Total Abstinence Association, and especially the jerseys and the football, with the congregation in total agreement.

The congregation was a who’s who of football greats who graced Gaelic Park over the last half-century as well as the dozens of players that Tommy mentored, trained, and coached during his lifetime.

His remains were waked at the Pelham Funeral Home, and he was interred at the Gate of Heaven Cemetery, Hawthorne, Westchester. We truly lost another great Gaelic personality, but Tommy will be in good company up above with the previously great GAA folks such as Seamus Dooley, Danny Doohan, John Riordan, Jackie Salmon, Pat Gavin, and Pat Diamond among others.

Now instead of the heated debates being in Ned Devine’s, they’ll be in the Devine Chamber, with St. Peter having his hands full as the moderator. May Tommy and these great Gaels, who did so much for the GAA, rest in peace.