A GoFundMe has been launched for firefighter Patrick Murray who is recovering after enduring an emergency surgery for a brain tumor while on vacation in Pennsylvania. 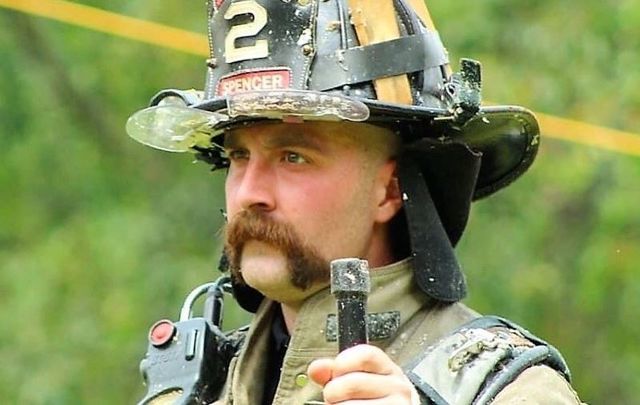 Firefighter Patrick Murray, 30, has "a long road ahead of him" as he recovers from a brain tumor. GoFundMe

Patrick Murray, 30, a firefighter in Spencer, Massachusetts, was on vacation with his family in Gettysburg, Pennsylvania last week when he fell ill, complaining of an extreme headache with excruciating pain near his right temple.

After a CAT scan, doctors determined that Murray had a tumor the size of a fist pushing against his brain. He was brought into emergency surgery at Wellspan York Hospital in York, Pennsylvania, nearly eight hours from his home in Massachusetts, for emergency surgery to remove the tumor from his brain.

Murray’s girlfriend and mother traveled down from Massachusetts to be by his side as embarked on intense medical treatment.

In the wake of the unexpected events, Murray’s family, friends, and community have rallied, raising more than $40k through a GoFundMe that was launched by Pat’s brother’s girlfriend, Leah Quimby.

“Instead of fighting fires, [Murray] is now battling a massive brain tumor and for his life,” Quimby wrote on the GoFundMe page that has since drawn donations from more than 630 people and groups.

She separately told MassLive: “He’s touched so many people’s lives, not only as a firefighter, saving lives, but also through his personality."

Making Murray’s emergency surgery all the more frightening, Quimby explained on the GoFundMe page that this isn’t Murray’s first battle with cancer: “Patrick was diagnosed with Ewing Sarcoma Cancer at the age of 21. He'd been having pain in his side assumed to be a cracked rib. Then eventually was found unresponsive. He was in treatment and chemo for about 2 years.

“The tumor had invaded so much of his lung they had to shrink it with chemo. They then went through a process of surgeries, first taking additional biopsies, then going back and removing 4 ribs, among other things. Afterward, he needed an additional surgery to stabilize his stomach (it flipped upside down from all the changes). Then additional chemo. He fought through chemotherapy and eventually was found to be cancer-free.

“We are very concerned that the tumor found in his brain could possibly be cancerous.”

On Monday, the day after Murray's surgery, Spencer Fire & Emergency Services, where Murray works as a firefighter, shared a positive update: “Just spoke to Pat on the phone. He sounds good. Upbeat. Some left-sided deficits. Ate some applesauce and ginger ale. Has gotten up and moved around. Meeting with more Docs to find out down the road stuff.

"Sounds positive so far! We love you Pat! He wants to be back to work in 2 weeks!”

Pat update: just spoke to Pat on the phone. He sounds good. Upbeat. Some left sided deficits. Ate some applesauce and...

Later that day, his colleagues shared another update that said Murray was resting in a hospital room, "feeling ok, a little headache, taking Tylenol for it only."

They added: "This was an aggressive tumor growing rapidly in the ER between CT scans necessitating the emergency surgery.

"Prayers and good wishes are needed as he goes forward. Not out of the woods like but looking better than yesterday."

Amazingly, Murray was discharged from the hospital in Pennsylvania on August 17, just two days after his major brain surgery.

The following day, his colleagues said that Pat made it safely home to Massachusetts: “Pat is home. Discharged late last night from the hospital in PA and allowed to travel via auto to home. Dana Farber has already reached out to him to be treated outpatient there. Awaiting biopsy results.

“He is still upbeat and neurological deficits have pretty much returned to normal. In some pain but resting. Can't stand for very long but feeling better each day.

“Unbelievable that three days ago he had brain surgery and is home already. He still has a long road ahead.”

Pat is home. Discharged late last night from the hospital in PA and allowed to travel via auto to home. Dana Farber has...

While Murray is recovering back home in Massachusetts, his medical bills are undoubtedly about to pile up. Donations, thankfully, continue to pour into his GoFundMe page that features well wishes from dozens of people.