Celtic FC Foundation's Walk on Weekend will include a trail from Yankee Stadium in the Bronx to the Irish Hunger Memorial in downtown NYC on June 5. 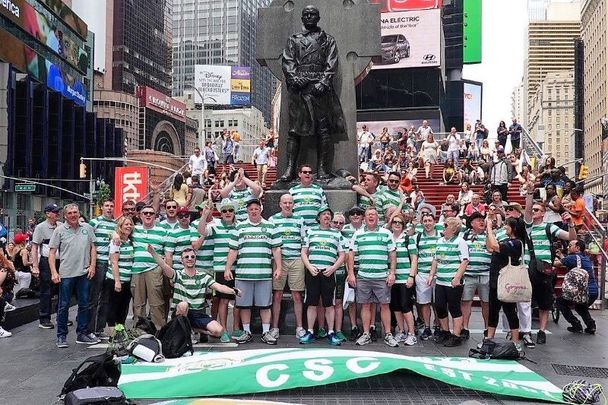 Glasgow Celtic supporters around the world, including in New York, will gather on Saturday, June 5 to raise funds for the Celtic FC Foundation, which supports the charitable principles and heritage of the Celtic Football Club.

New York's Glasgow Celtic supporters - Manhattan No.1 CSC -will gather for the Celtic FC Foundation's Walk on Weekend this Saturday, June 5 at 9:45 am at Yankee Stadium in the Bronx.

The Celtic supporters will then walk to the Irish Hunger Memorial in Battery Park City, with a plan to stop by the Francis P. Duffy Square in Midtown on the way.

?‍♂️?‍♀️ We're encouraging supporters to get active and take part in our brand new sponsored event, #WalkOnWeekend, which will take place on Saturday, June 5 and Sunday, June 6, 2021 ?#FootballForGood ?

Robert Parker of the Manhattan No.1 CSC said: “We’ve been associated with Celtic FC Foundation for a few years now and we recognise that the Foundation are well-placed to ensure the CSC contributions are well spent and are able to effectively deliver projects that align with our values.

"A great example of this was seen when the Foundation presented a $25,000 cheque to Coalition for the Homeless thanks to funds raised in New York, including supporters clubs’ contributions.

“Unfortunately, our fundraising activity and the ability to get together has been curtailed over these past 14 months due to the impact of the pandemic but, with restrictions beginning to ease, the Walk On Weekend seemed like a great opportunity to pull on the Hoops, spend some time walking through the streets of New York and do our bit in support of Celtic FC Foundation’s Football for Good Fund.”

There’s still plenty of time for individuals or supporters’ clubs to join in, and it’s easy to take part. You can register online here, or make a donation online here.

As a registered charity, the Celtic FC Foundation's ethos is typified by a determination to create opportunities for society’s most vulnerable and marginalized groups – principally, supporters address root causes of poverty by equipping individuals with the tools and means to reverse inequality.

Beneficiaries include families, individuals, the elderly, the homeless, refugees, women and children living in refuge, and frontline medical workers. Partners include two based in New York -- Coalition for the Homeless and Children’s Aid -- who received donations to provide vital interventions for children and those who are homeless.

Due to the impact of the pandemic, the foundation was forced to pause all of its traditional project delivery and fundraising activities and, in response to the crisis, its entire focus was redirected to alleviating the evolving complications through the launch of our Football for Good Fund (FFGF) in March 2020.

The fund has since risen to over £1.3 million and has worked with a host of partner organizations to provide urgent and vital food and essentials, assistance to challenge fuel poverty, and mental health support to the most vulnerable in New York, Scotland, Ireland, and other key locations.

The 2020 New York gala dinner was delivered virtually on October 8. With special guests including Sir Rod Stewart and Scott Brown, it was a wonderful success. This year, the foundation is hopeful of returning to New York City in October for the 2021 gala dinner.