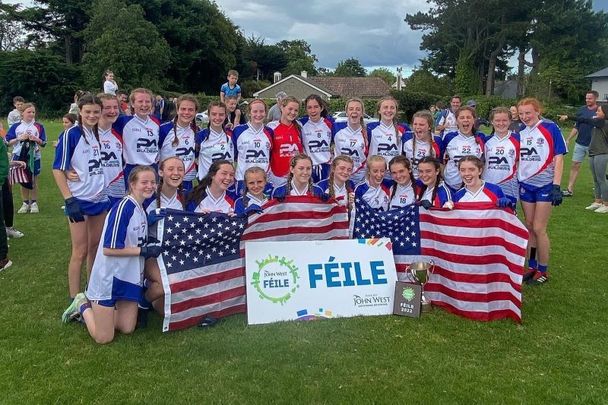 New York’s girl footballers did themselves proudly and are the Féile champions for 2022.

On their voyage from the Big Apple to Dublin, the New York team and their 50-strong entourage stopped off at the Truagh Gaels Club in Monaghan, the home club of their manager, Niall McKenna. This served the dual purpose to enculturate and acclimate the young Yanks.

Here the New Yorkers strutted their stuff against Monaghan and Tyrone development squads at St. Mellan’s Park. After the exhibition, it was time for socialization, relaxation, and a bit of fun for the touring party.

The Truagh Ladies GFC helped to organize a gathering, titled the “Monaghan and Big Apple Blitz.” Pig on the spit was followed by an evening of Irish traditional music and dance, with the local folk group Bula Beag part of the entertainment.

After spending the night with the host families, it was on to the main business the next day in Dublin. 88 clubs from Ireland, England, Europe, and the US competed in the Féile Peile na nÓg competition in nine venues between Dublin and Kildare.

New York’s venue was the Kilmacud Crokes stadium, and they came, saw, and conquered with bags of goals. They met Claremorris (Mayo) in the first game, winning by 6-8 to 0-3. Next up was John Lockes (Kilkenny), who went under by 5-11 to 1-4. The demolition derby continued as Southern Gaels (Kerry) were the next victims, 6-4 to 2-0.

Three straight victories put New York into the semifinal against Erin’s Own (Kilkenny), winning by 4-1 to 1-1. Then it was on to the final where New York easily accounted for Naomh Mhuire, 3-8 to 0-2, with the goals coming from Ava Fitzsimmons (two) and Caitlin Cronin.

Over the course of the five-game tournament, all members of the 24-player squad played a role. The defense was capably controlled by keeper Emma Walsh who not only pulled off several saves but her solo runs changed the scene from defense to attack. Further out, tenacious tackling from Cathy O’Neill, Joey Degi, and company ensured there were no easy paths to the goal.

Amelia Leyden was a great platform in the middle for setting up but also taking scores. The Kelleher twins, Niamh and Fiona, the free-taker, were a very dynamic duo. Ava Fitzsimons (9-3), Caitlin Cronin (7-12), and Fiona Kelleher (4-7) were prolific scorers during the tournament.

Winning the top award in this prestigious competition is powerful testimony to the wonderful coaching that’s taking place in the Gaelic for Girls programs in Rockland, Paddy’s Field, and Frank Golden Field.

What a day! What a team! Believe and Achieve!

*This report first appeared in the July 13 edition of the weekly Irish Voice newspaper, sister publication to IrishCentral.