The Irish community at home and abroad rallied in support of Tyrone native Mickey Coleman who was recently hospitalized in New York. 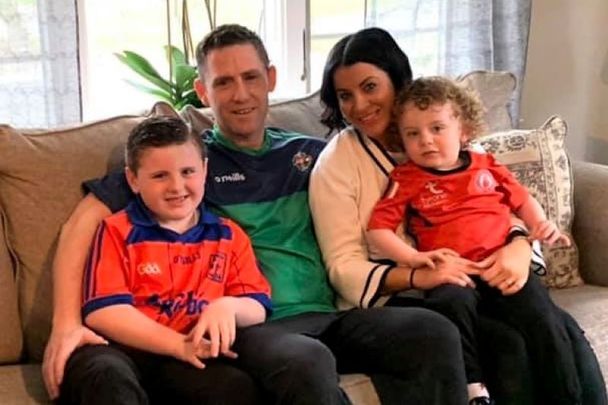 The Irish community in New York and beyond is breathing a sigh of relief with the news that musician and former All-Ireland-winning Tyrone footballer Mickey Coleman has been released from the hospital after suffering a massive heart attack on Monday, March 29.

Coleman, who turned 42 on Tuesday, suffered the shock heart attack at his home in Pearl River, which he shares with his wife Erin and their two young sons, after returning from a regular jog.

Coleman flatlined three times on the way to the hospital, where he later learned that a nurse performed CPR on him for six minutes. He underwent surgery at Montefiore Nyack Hospital and remained on life support for three days after.

As word emerged of Coleman's condition, the Irish community at home and abroad rallied around.

Father Brendan Fitzgerald, the pastor at St. Barnabas Church in the heavily Irish area of Woodlawn in the Bronx, said the rosary at the Rockland GAA clubhouse on March 31 which featured a gathering of Irish musicians playing tunes in Coleman's honor afterward.

The prayers and good wishes have been thankfully answered, Coleman's wife Erin Loughran announced on Sunday via Facebook.

“Mickey is home!" she wrote in a post that has since been liked more than 2.1k times.

"Mickey Coleman is overwhelmed with the amount of support, prayers, well wishes, and encouragement that he has received from Ireland, the U.S.A., and across the globe.

“Mickey would like to personally express his deep gratitude to the Pearl River EMS and Orangetown Police Department, Fr. Brendan Fitzgerald as well as the amazing doctors and nurses in the Emergency Room, Cardiac Care, Cath Lab, and SICU at Montefiore Nyack Hospital for saving his life and for the incredible care he was given there.

"Thank you all for your kindness and positivity through this time. We are forever grateful to each and every one of you. God Bless, Mickey, Erin, Micheal, and Riordan.”

Mickey is home! Mickey Coleman is overwhelmed with the amount of support, prayers, well wishes and encouragement that...

The New York Club Tyrone, of which Coleman is a co-founder, also shared the good news on Facebook saying: "Mickey is on his way back home. Time now to give him some quality time as he continues on the journey to full recovery."

Some good news to cheer up your Friday evening. Mickey is on his way back home. Time now to give him some quality time as he continues on the journey to full recovery. All the best Mickey.

Coleman was a star footballer for his home county, Tyrone, and was a member of its All-Ireland winning teams in 2003 and 2005. He continued to pursue his love of Gaelic sports through his involvement with the Tyrone club in New York and the Rockland GAA.

He told RTÉ this week: "One message that really stood out was a video from each member of the 2003 Tyrone team. The boys recorded individually, and someone put it all together. That was just unreal – hard to put words on that."

Our thoughts and prayers are with Mickey Coleman who is critically ill in hospital in New York. Mickey has represented our club at all levels and succeeded in many battles. We wish him every strength in his current fight.

The native of Ardboe immigrated to New York while in his twenties and is now president of Shoreline Builders, a company that specializes in drywall, ceiling, concrete, and fireproofing installations. He is also well known in the Irish American community as a talented musician and songwriter who performs regularly. During the pandemic, he hosted several virtual shows on his Facebook page.

In 2013, Irish Voice trad columnist Paul Keating wrote: “For those who cherish the folk song tradition as telling our history, seeing young men like Coleman embrace it and move it forward in a contemporary way is very reaffirming.

"Coleman can deliver his songs with the tone they deserve and pack a punch or a punchline, easily drawing in his audience to his many charms as a performer."

Coleman married Loughran, a native of New York, in Co Kerry in 2014. She is an All-Ireland-winning fiddle player and was named the 2011 New York Rose of Tralee. She is an honors graduate of the University of Limerick and owns her own Irish music school with two locations in Pearl River and Woodlawn in the Bronx.

Loughran's mother is Margie Mulvihill, the flute and whistle player who is a founding member of the Pride of Moyvane ceili band.

Coleman’s sudden illness received significant media coverage in Ireland. The Irish News in Belfast reported his release from hospital on the front page of its April 12 edition.