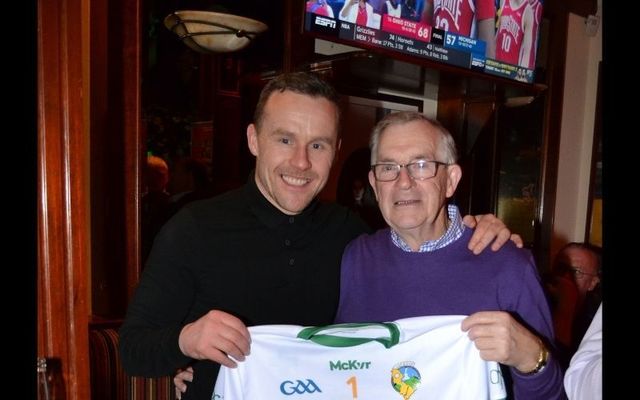 Last weekend was a very busy one for many of us Leitrim folks. Early on Saturday, we headed to Tibbetts Brook Park for the grand finale of the Fifty Mile Challenge. It certainly was a challenge to get it finished as the finale had been canceled a few times due to Covid and adverse climatic conditions.

Once Andy Moran, a former Mayo player and Footballer of the Year, and current Leitrim manager got walkers/runners under starters’ orders it was all systems go as Leitrim’s intrepid supporters sauntered around the idyllic trails of Tibbetts.

Next, it was on to JP Clarke’s, where proprietors Caitriona and Seamus are the main sponsors of the Leitrim team, for refueling and refreshments.  Then it was home for a siesta and a shower, and back to Clarke’s for the other two main events, namely the unveiling of the new Leitrim jersey and the launching of Andy’s book.

Martin Furlong, the legendary Offaly goalkeeper, who along with Seamus Darby helped to derail the Kingdom’s drive for five in ’82, modeled the keeper’s jersey.  Andy, one of the top forwards of his era, unveiled the outfield jerseys.

Moran was still very much in the spotlight in a thronged JP Clarke’s as he undertook his last task for the day, namely the launch of his recently published book Andy: Lessons Learned in Pursuit of Glory, and it’s a very compelling account of his nearly two decades playing for Mayo.

While some of us moaned the limited opportunities during Covid, Andy used the lockdown period to chronicle his journey through the sport he loves, the people who influenced him and the lessons he learned, not just about football, but also how they impacted every aspect of his life.

As one who has been involved in football through the years either on the playing fields, the sideline or the locker room, I strongly recommend this book to young players and managers. It’s a reservoir of personal trials, triumphs and strategies, some painful, others pleasant, that enabled the fledgling Mayo player to become a marque forward and one of the best of his era.

In addition, he chronicles the development of some of his teammates as they reached the pinnacle of their playing careers.  Among them are Lee Keegan, Cillian O’Connor, Keith Higgins, Trevor Mortimer, Alan Dillon, and Ciaran McDonald.

Football has changed radically over the last few decades, and this book is certainly very much in tune with the current demands of the game and how best to meet them. In my playing days football was basically a game of catch and kick, an odd block, a few solid shoulders executed, an occasional Jonsie-like dummy, and maybe a few solos sprinkled in as well.

In defense, it was basically, catch, kick and clear. The fullbacks rarely went outside the 21 and the rest of the defenders hardly ever got as far as midfield. Likewise forwards stayed within their respective zones. Roles were largely space-defined, and players had generally a very limited skill set.

Sure there were some very skillful players such as Mick O’Connell (Kerry), Sean O’Neill (Down), Tony Teague and Matt Connors (Offaly), Mickey Kearns (Sligo), and Frank McGuigan (New York and Tyrone), but they were very much outliers rather than the norm.

In today’s game players have a much more extensive skill set, plus they are faster, fitter, stronger and a lot more versatile. It’s not unusual to see backs and goalkeepers splitting the post, and all players are ambidextrous. All skills are vastly improved, perhaps with the exception of high fielding or catching.

In a way that’s hardly surprising given that football has become very much a possession game, with less of a need or emphasis on catching. Some critics claim that Gaelic football is beginning to look like basketball with short passing becoming a feature to the point of tedium. It has even been suggested that perhaps a shot clock should be implemented to create more scoring opportunities.

In fairness to the GAA, they did introduce the “mark” to ensure that catching, one of the most traditional skills is not lost.

Andy states that sport teaches us to work as a team, take responsibility, promote health and wellbeing, and as the United States Army slogan used to say, “Be all you can be”, especially when it comes to your sport.  He certainly has walked the walk and earned his stripes when it comes to helping young players progress in modern-day Gaelic football.

From perusing his book I was amazed at his penchant for picking concepts that begin with the letter A.  Among them were ability, application, accountability, attitude, adaptability, apprehension, and adversity.

Andy notes that ability and application are critical variables in the equation for optimal performance, but cautioned that application was the more important of the two.  He adds that “talent is from the neck up” and that failure to reach goals is maybe due to lack of effort and intent, rather than solely the lack of ability.

The ability and application tandem resonated very well with a book by Geoff Colvin that I read a few years ago, namely, Talent Is Overrated.  In Colvin’s view, the keyword was practice, not just monotonous repetitious type practice.  Instead, he called it “deliberate practice” whose elements included focusing on key skill components, with corrective feedback being used to reinforce improvements.

Andy incorporates similar concepts into his coaching and training and provides very specific examples from his own experiences and also those of his teammates. While he’s acutely aware of the collective demands for conditioning and coaching, he’s also cognizant of the great variation that exists in ability and aptitude in a panel of players.

One size does not fit all, hence the greater need to have programs tailored to players’ individual needs.

Aside from teaching players to develop optimally, he said the greatest lesson for players is to be accountable.  We’ve all heard ad nauseam about referees, officials, conditions, opponents, luck, etc. depriving us of victory. Andy says it’s possibly very simple -- maybe you weren’t just good enough.

Ah yes, the truth can be hurtful. Here’s where a few of his keywords kick in when dealing with adversity, namely accountability and attitude.

Andy, by any criteria, was an exceptional player. He has all the accolades: all-stars, player of the year, man of the match awards, national leagues, provincial championships, Sigersons and club championships, except one, an All-Ireland medal, though he played in about a half dozen finals.

When quizzed about the omission, the Mayo man is quite introspective but forthright, and his answer reveals plenty about the character of one of the greatest forwards of his era. I don’t want to quench your curiosity about what has been a great enigma for many, especially Mayo people.

You’ll have to get your hands on the book for the answer to that, and as I said earlier the book should be required reading for young athletes and coaches. It will help keep them on the right sporting track as well as learning valuable lessons that can also be applied to the game of life.