Jennifer Drum, 38, messaged more than 50 people with the same surname as Yaroslav Sydoryshyn, who used to spend summers in her home as part of the Chernobyl Project 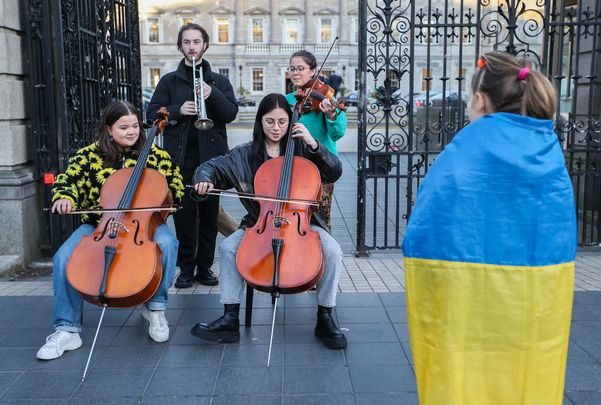 An Irish woman has tracked down her "Chernobyl brother" who used to spend summers in her family home in Meath, helping him to flee war-torn Ukraine.

Jennifer Drum, 38, messaged more than 50 people with the same surname as Yaroslav Sydoryshyn, who used to spend summers in her home as part of the Chernobyl Project, an initiative that brought more than 25,000 children affected by the 1986 nuclear disaster to Ireland for summer and winter holidays.

She eventually succeeded in locating Sydoryshyn with the help of a Ukrainian influencer, who put her in touch with his wife Tanya.

Drum told the Irish Examiner that her parents Yvonne and Alex Miller first opened their home to Sydoryshyn when he was nine and that he visited every summer for four years.

"He stayed with us from when he was about nine to 13 years of age and we treated him as part of the family. Even though he never spoke English, we were always able to communicate with him," Drum told the Irish Examiner.

"We often thought about him and a few weeks ago, just as the Ukraine invasion started, mam found one of the letters that his parents used to send us to let us know he was okay. I decided to try and find him."

She said she tracked down her long-lost Chernobyl brother after she messaged a Ukrainian blogger named Anastasia, an influencer with 75,000 followers.

She discovered that Sydoryshyn was working as a plasterer in Kyiv but that his work had dried up since the beginning of the Russian invasion on February 24.

Drum sent Sydoryshyn €100 to help him flee to Poland, helping him to complete a remarkable journey back to Moynalvey in Summerhill.

She has also set up a GoFundMe for Sydoryshyn, his wife Tanya, and the couple's three children.

The online appeal has raised more than €4,000 since it was launched, while any further donations will be used to help other Ukrainian refugees.

Drum said Sydoryshyn was "relieved" when he arrived in Ireland and revealed that he brought several photographs from his previous trips to Ireland with him.

"We never thought when we dropped him off at the airport for the last time when he was 12, that we would be rescuing him from a war 20 years later," Drum told the Irish Examiner.

"My parents opened their home to him back then and now it's my turn to open my home to him and his family for as long as they need."