Karmen Curley, 21, from Belfast, suffered a bleed on the brain after she hit a pothole and was thrown over the front of her scooter in May 2019. 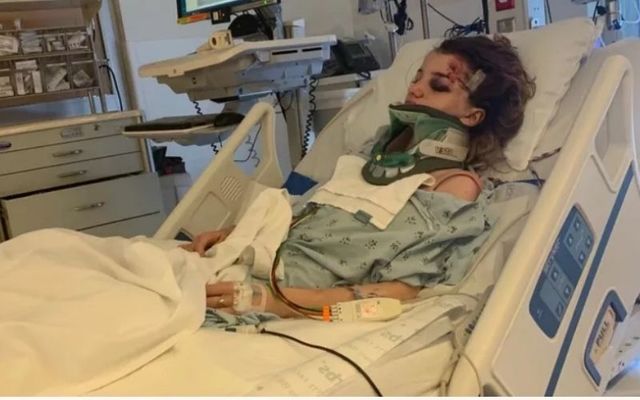 Karmen Curley in UCLA Hospital after the accident in May 2019. GoFundMe

A Northern Irish woman who suffered horrific injuries in an electric scooter accident in California three years ago has said that she's "lucky to be alive".

Karmen Curley, 21, from Belfast, suffered a bleed on the brain after she hit a pothole and was thrown over the front of her scooter in Los Angeles in May 2019.

She also suffered a broken collarbone, nose, and orbital bone and spent nearly three weeks in intensive care in the UCLA Hospital in Los Angeles where her medical bills cost an estimated $13,000 per day.

She told the Belfast Telegraph that she still undergoes tests to examine the injuries she suffered almost three years ago, while she also remains on medication.

"I was in hospital for camera tests last year and I'm still on medication because of the accident," Curley told the Belfast Telegraph.

"I get migraines a lot. The experts aren't sure what's wrong with me. They believe it may be post traumatic epilepsy linked to the accident."

She revealed that she had seizures as soon as she recovered consciousness following the accident and said that doctors told her she was lucky to be alive.

"They said a lot of people with my type of bleed on the brain don't survive so I feel very lucky. Even if I do have epilepsy, I'm glad that's all I have."

She said that the accident "definitely" affected her memory but said that she can't complain because she feels "lucky to be here".

Her sister Sian launched a fundraiser to help cover her medical bills and told the Irish Sun that the family was still trying to pay off their mother Karen's funeral costs after she died in 2018 after suffering an aneurysm.

"We are still paying off the funeral costs of our Mum and with these mounting costs, we don’t know how we’re going to cope," Sian Curley told the Irish Sun.