Neurologists have identified the therapeutic benefits of Irish dancing and Irish music for people living with Parkinson's disease. 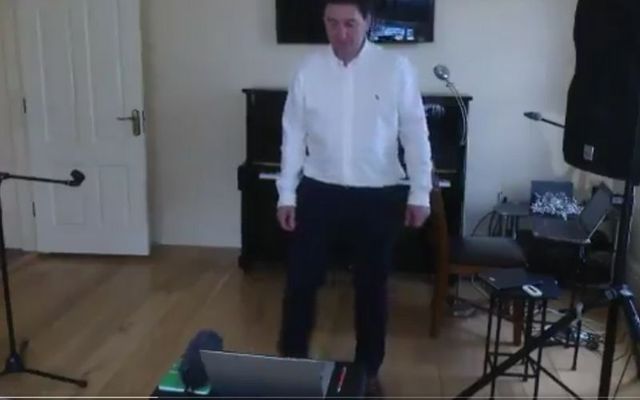 O'Dea has been trained in the methodologies of Italian neurologist Dr. Daniel Volpe, who identified in 2012 that Irish music and set dancing had a positive impact on mobility and balance for people living with Parkinson's.

Prior to the COVID-19 pandemic, O'Dea had been running weekly classes in Dublin and Limerick and quickly switched to virtual classes once the Irish Government banned indoor gatherings.

"I got one or two people to give me a hand setting it up and I had the whole class back up and running within two weeks," O'Dea told IrishCentral.

He said that one of his biggest challenges was teaching some of his older students how to communicate online and said that roughly 30% of his class had never used a computer before.

"I had to teach people how to get online. I contacted their families to help them set up. For people living on their own, I got local GAA clubs to see if they had anyone with technical expertise to go and help them. We got great support."

The classes have been running smoothly ever since. O'Dea runs two classes per day on Mondays, Wednesdays, and Fridays, while he also runs a beginners' class on Tuesday for newer guests, with a number of people joining from as far afield as Hawaii, Massachusetts, or Iceland. In total, he teaches more than 80 per people living with Parkinson's every week.

The online classes have been crucial for people living with Parkinson's, O'Dea said, as they have allowed people to socialize regularly during the pandemic in addition to giving them a daily structure.

O'Dea's classes were a huge social outlet before the outbreak of the coronavirus, allowing people to chat and socialize at least once a week, and he said that the online classes have been a "very good substitute."

"There's no comparison [to in-person classes]. That human touch, that human chat, that feeling that something different might happen today in the class; that's missing," O'Dea said. "The alternative for some of these people would be sitting at home - possibly isolated."

Most importantly, however, the classes allow people living with Parkinson's to stay active, slowing the progression of the neurological condition by keeping their brains alert and healthy.

"Doctors and neurologists say that exercise is a massive part of learning how to live with Parkinson's," O'Dea said. "If you don't move and keep yourself in the right frame of mind, your progression of Parkinson's will get faster."

Therapy classes involving Irish music and set dancing are being provided online for the first time in Ireland to those living with Parkinson's disease. @omainnintomas reports | https://t.co/pSG9sp4bZD pic.twitter.com/kIsxzFrbx4

Gary Boyle, who has attended O'Dea's classes since 2015, called the move to online-based classes a "spectacular success."

"This has been a serious breakthrough and it's helping people to stay moving and it's slowing down this bloody Parkinson's that we have to live with," Boyle said.

Boyle said that O'Dea's in-person classes were the highlight of the week for some people and said that the virtual classes have provided a social outlet during the pandemic while maintaining people's "brain health."

Boyle believes that online-based socializing could become crucial for people living with Parkinson's going forward. He said that there could be as many as 18,000 people in Ireland living with the condition but that only 1,000 people are part of organizations like Move 4 Parkinson's, which highlights the importance of technology.

"It would give people a lot more confidence and a lot more reason to be active. That would have a transformative effect on the situation we're currently seeing where people in their early 70s are going into nursing homes."

Pat Noonan, meanwhile, who was one of the first people to join O'Dea's in-person classes in Dublin, echoed Boyle and said that the classes have provided a vital social link during the 12 months of the coronavirus pandemic.

"The social aspect alone is fantastic. Meeting the guys every other morning is fantastic. You don't feel isolated. The dancing is a very important part, but the social element is even more important," Noonan said.

His wife Noreen said that it would have been far more difficult to encourage him to exercise over the past year if O'Dea didn't launch the online classes.

"It'd be much more difficult for me to keep encouraging Pat to exercise without it. I don't think we've missed more than one or two classes. Any time we've missed would have been for essential reasons. The social aspect has been wonderful.

"I think we might not be sitting smiling at each other if we didn't have it," Noreen joked.

O'Dea believes that the online classes have given people living with Parkinson's confidence and plans to continue to hold virtual classes after health restrictions are lifted, although he also acknowledged that he had to bring in-person classes back into the community.

"I think it has given people confidence in themselves. People are getting strength from each other.

"I will keep going with online stuff for a lot of people who are in isolated areas and may not be able to go to classes, but it's very important that I take it back into the community. Community is very important.

"What happens with Parkinson's a lot of time is that people isolate themselves and pull back from the community because they feel they're not able to do everything, so keeping it in the community is essential."

O'Dea is looking forward to returning to in-person classes but is more than happy to continue with virtual sessions in the meantime.

"Personally, I can't wait until I'm holding someone and dancing a Connemara set. This has been a very good substitute for us. It has kept us all in contact. It has kept us alive and feeling good in ourselves - physically and mentally.