Irish in Texas ponder a grimmer future in Harvey’s aftermath

“The devastation,” Consul General Adrian Farrell said, “is probably worse than what you’re seeing in the media. People now need help more than ever.” 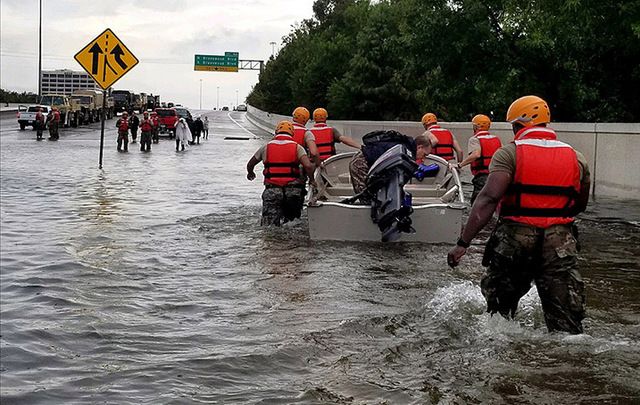 Ireland’s Consul General in Austin, Texas has told to IrishCentral that all Irish citizens have been confirmed safe in the aftermath of Hurricane Harvey. Although “some of them did lose everything”.

Adrian Farrell said the focus had now moved beyond assessing the safety of Irish citizens and towards “long term recovery and I think we all know that there’s an awful lot that needs to be done.”

“The devastation,” he added, “is probably worse than what you’re seeing in the media. People now need help more than ever.”

So far half a million families have applied for emergency loans from the Federal Emergency Management Agency - a statistic Farrell describes as “mind boggling”.

Relatively few Irish born people call Houston home but the number of dual citizens previously resident in other parts of the United States has risen steadily over the years.

“Texas was sucking up so many dual citizens from the East Coast and California,” Farrell confirmed, “the numbers were really changing by the day almost. So it’s impossible to keep a handle on numbers.”

Whilst Houston is looking at a bill for the damage that could be as high as $180 billion and a recovery time that could well run into years, Irish community groups have rallied around and joined local efforts to clean up the city.

In the six days after the hurricane members of the local GAA club, the Houston Gaels, managed to help clear 18 affected homes and a GoFundMe page to help buy emergency supplies quickly exceeded its $2,000 goal.

Blood supplies in the city have dropped to a perilously low level and the West University Baptist Church yesterday hosted a blood drive in honor of one of their congregation, 19-year-old Shan Tynan.

Originally from Carlow Shan is in Texas for treatment for histiocytosis - an extremely rare type of cancer - and had to be helicoptered to the hospital for a blood transfusion after her apartment was encircled with five feet of water.

Her mother took to their Facebook page to remind followers that, “Every donation counts and helps a child to fight another day.”

Though the city might still be far from normality few would deny this week has been something of a turning point with most having returned to work after the long Labor Day weekend.

Large companies, school, universities, almost all have opened their doors again; oil is once again flowing from the pipes of Houston to the rest of the nation and public transport in certain areas is running again.

Tentative though these first steps to recovery may be, they have at least been taken.

One doctor, Pat O’Sullivan, told the Irish Times, “The people here show that however big Harvey may have been, the hearts of Houstonians are bigger. Houston will be back. Bigger, better, stronger.”

And mingled with defiance comes also a new sense of perspective: “I will never be negative about Irish weather again,” another resident, Ruth Byrne, bluntly concluded.