An Irishwoman shares her personal experience with North West Hospice in Sligo and the profound effect it had on her life. 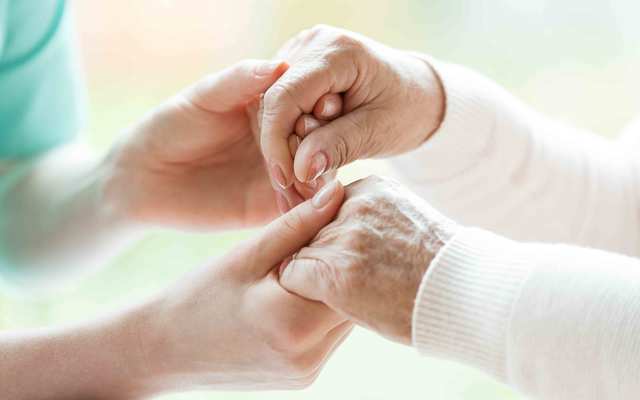 In 2007, Mary did not know that the devastating cancer diagnosis her husband Anthony received would change her entire career path. Eleven years later, Mary fundraises for North West Hospice in Sligo town and looks to the always generous Irish diaspora for support.

Below, Mary shares her and her late husband Anthony’s personal experience with North West Hospice in Sligo after Anthony was diagnosed with terminal cancer.

“Once we got over the initial shock, Anthony was very positive as was I. We were both scared but positive. So he started on chemotherapy and he never batted an eyelid. He never complained. Following that treatment, he’d to go to Galway five days a week for radiotherapy.

Initially, he used to drive himself up and down but as the treatment went on and he got weaker I would drive him, or sometimes, he would go on the bus from Sligo Hospital to Galway.

Unfortunately, once this treatment ended his condition deteriorated rapidly. He was rushed to hospital in Dublin where we spent a very scary 10 days. The doctors told me if I wanted Anthony home when he died we needed to go home in the next couple of days … I eventually pulled myself together enough to ring a friend at home in Sligo and told her what was going on.

Her advice to me was to ask for a referral to North West Hospice.  My immediate reaction was ‘No No No!’ I knew nothing about Hospice but somewhere in the back of my head I thought a hospice was where you went to die. Even though I had just been told Anthony was dying, I still did not want to bring him to the hospice.

Anthony was transferred from Dublin by ambulance to North West Hospice in Sligo.  I drove down behind him and I will always remember arriving at the front door of this big grey building and being met by a nurse in her blue uniform with a big smile. She held out her hand to shake mine and said, “You must be Mary. You are very welcome to North West Hospice. We are just getting Anthony settled and we have tea and toast for you in the day room, you must be exhausted from your journey. Have that and then come to see Anthony.”

That was as I always describe it … the beginning of a most positive experience at the most heartbreaking time of our lives.

I very quickly realized that this place was totally different from anything I had imagined. The staff was incredible, the consultant, doctors, nurses, healthcare assistants, the catering staff and housekeeping staff. They were all incredibly supportive in a totally non-invasive, friendly and professional manner.

The clinical team at North West Hospice asked for a meeting led by their wonderful consultant. They suggested that I meet with a surgeon who wanted to discuss Anthony’s treatment. They told me it was not for a cure but to improve his quality of life which at this stage was very poor.  He was on a lot of drugs to manage the pain and all the other symptoms that came with his condition.

I met with the surgeon and he explained that he could do an operation that would give Anthony relief by bypassing his bowel and give him a colostomy. He said that he would not be going near the cancer but it would give Anthony huge relief. It was not without risk as Anthony was quite weak at this stage.

As a married couple you make all big decisions together - do you buy a house, do you have children, where do you send them to school? Anthony was not in a place where he could make a decision and I was scared to make it for him …. But with the support of the hospice team, we went ahead.

The result of the operation was better than any of us could imagine. Anthony was able to eat properly again. He gained strength. His medication could be reduced and he became a lot more clear-headed. He was able to get out of bed, have showers and actually gained weight.

One day, as I arrived at the Hospice, that same nurse who welcomed me on the first day sat me down and said Anthony would like to go home.

I was delighted but absolutely terrified because even though he was a lot better he had dressings to be changed, meds to be given etc. The hospice team showed me how to change dressings, they organized for a special bed to be sent to our house and the Community Palliative Care team visited Anthony at home.

I describe that time as the hospice giving our children back their father and me back my husband. Friends and family could call over; our children could run around; there was normality about it.

Read More: Irish jockey, 25, loses battle with cancer day before she was due to wed

It was not all smooth running. Sometimes, he would be ill and he would have to go back into the hospice to maybe get meds changed and stabilized. Then he would come home again with the hospice team supporting us. I will be forever grateful to the hospice for those few months.

Our little girl was 5 and our boy 15 when their dad got ill and the hospice looked after them as well, answering any questions they had and guiding me in how to help them. They didn’t just look after Anthony they looked after and supported the whole family.

Anthony loved the staff and had a great relationship with them, he could not say enough good about them and felt safe and secure under their care.

In Autumn 2008, his condition started to deteriorate and he returned to hospice full time. We celebrated his birthday on October 8 in the Hospice In-Patient Unit where we had three birthday cakes. One from the children and myself, one from the wonderful staff and one Anthony’s family. Anthony really enjoyed that day.

A few weeks later, having spent the night with Anthony in the hospice, I noticed at about 6 in the morning his breathing had changed and I called the nurses.  At 8 am that morning Anthony slipped away from this world with me by his side. He wasn’t scared. He was pain-free and he passed with such dignity surrounded by the support of North West Hospice.

We were under the care of the Hospice for a total of 10 months. By the time we got to Hospice Anthony had not worked for nearly 2 years. As his illness progressed, I had reduced my hours and then stopped working altogether. So when we got there, we were financially very badly off with debts running up. If we had to pay for the service of North West Hospice we would have never got through the front door. Thankfully, once you are under their care it is absolutely free.

They continued to support us after Anthony’s death. Sometimes, when days were really bad I would call to the unit and just sit and have a cup of tea and off-load to a member of the team who would listen and understand and help dry my eyes and get me going again.

I am forever indebted to the hospice for all they did for Anthony, for me and for our children.

Losing my husband changed my whole perspective on life, and eventually, I went back to school thinking I wanted to train to be a paramedic. One of my placements was in North West Hospice and from the first day I knew it was where I wanted to be. I completed my training and after finishing applied and got a job as a Health-Care Assistant working in the In-Patient Unit where Anthony had passed away. I felt privileged to be able to give care and support to patients and their families as we received on our journey through Hospice.

I have since transferred to the fundraising team in North West Hospice where we work tirelessly to raise funds to maintain our essential services. I still cannot believe we have to fundraise over €1 million to provide such vital services for our local community. I want to make sure that the services are there for people like Anthony, myself and my children when they need them. It’s our hospice in our community. It will only survive if we all work together to support it.”

Learn more about North West Hospice from their video here: