Irish musician Allen Gogarty is on the road to recovery with some help from the New York Irish music community after he endured a massive heart attack. 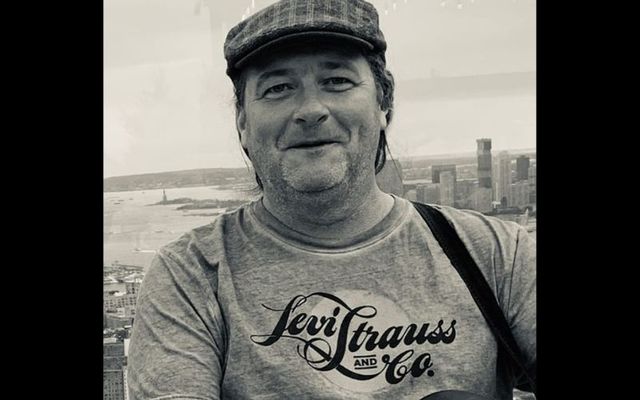 A benefit for Irish musician Allen Gogarty, who is recovering from a heart attack, will take place in NYC on February 11.

Allen Gogarty was smacked with ferocity by the unpredictability of life last month.

Gogarty, the 48-year-old native of Kilmainhamwood, Co Meath and resident of New York since 2002, had played a gig the night of Thursday, December 1, one of four or five live appearances he makes each week in the boroughs or the wider tri-state area.

He arrived home to Glendale, Queens in the early hours of Friday morning, caught a few hours of sleep, and rose around 10-ish with an unusual, shooting back pain. Gogarty had never experienced anything like it.

“The pain continued for a while. At one point I took my shirt off, laid on the floor and started sweating,” he recalled during a weekend interview with the Irish Voice, sister publication to IrishCentral.

He decided to take a bath, and his wife Amparo called the ambulance. When it arrived Gogarty says he was feeling better, but he was taken for observation regardless.

“When I was in the ambulance the medics were asking me how I was. I said I was fine and thought I might have over-reacted about the pain,” he recalled.

He was brought to the ER at Long Island Jewish Forest Hills Hospital for some tests which showed he wasn’t fine. Bloodwork revealed a chemical secreted from the heart indicative of a cardiac event, so he was kept overnight and transferred to the cardiology wing the next morning.

At that point, Gogarty was in severe pain and remembers asking for painkillers. Things quickly took a turn for the worse that Saturday morning and he blacked out.

The father of two teenage boys went into cardiac arrest and flatlined. The severity of his heart attack was such that he was transferred to North Shore University Hospital in Nassau County because Forest Hills didn’t have the required equipment to treat his condition.

He was given CPR and chest compressions, and doctors were able to restart his heart. Then he had an angioplasty, surgery to clear one of two arteries that was 100 percent blocked. Gogarty later had a second angioplasty to treat the other artery which was 90 percent blocked. Stents were also implanted in his arteries to keep them functional.

Gogarty recalls waking up for a short time the day after his ordeal with “all sorts of tubes,” he said.

“I had a breathing device and the first thing I did was pull it out myself. I couldn’t speak. When I tried there was no voice.”

He assumed he was still in Forest Hills. Sore and shocked, Gogarty slowly started to get his strength back and was released from the hospital after six days.

He’s grateful to be alive, and surprised that his body experienced such a sudden trauma.

“There were no warning signs. You would expect something, but I had nothing.”

Like all musicians who earn their keep from live gigs, the pandemic put a sudden and severe dent in Gogarty’s income. He adapted by doing some livestreams, but getting back to where he left off took a long time. He’s been happily busy again for several months playing his Irish music at various pubs and other venues, and also working with the Emerald Isle Immigration Center’s Creatives Rebuild New York initiative.

But his musical career is once again on hold. Gogarty says he’s feeling better, getting a bit stronger every day but playing live, for now, is not happening.

“I’m walking a lot and I’m able to do the shopping and things like that,” he says. “A couple of days ago I took out my guitar for the first time since the heart attack. It felt nice, I sang two songs but I could only play for a short period of time. I have to get back into shape.”

Gogarty, a singer/songwriter/guitarist, has a couple of provisional appearances booked for March, “providing that I’m feeling okay,” he says. “I will have to ease back into it.”

His many friends in New York’s Irish music scene immediately joined together to organize a GoFundMe and a live benefit performance set for February 11 in Manhattan. Gogarty has no wages at the moment given the nature of his job as an independent musician, so bills are mounting.

“I was still in the hospital and people visiting me said they were starting to put a benefit together. I said I wasn’t sure about it, but they told me it was none of my business,” he laughs.

Through the years, Gogarty has played more benefits than he can count. The support now coming his way, he says, is deeply appreciated.

“I was looking at the medical bills so far – a half a million dollars,” Gogarty says. “It’s scary to me that it’s so much. I’m lucky to have a certain amount of insurance so I won’t be paying all that, but I’m going to have to pay some so we will have to juggle with payment plans.”

It’s obviously been a difficult time for Gogarty and his family, particularly his boys.

“They were very upset. They thought they were going to lose their daddy just before Christmas,” he says.

Gogarty is taking each day as it comes, following doctor’s orders, taking meds “that I’ll be on, some of them anyway, for the rest of my life,” and looking for an elusive night of sleep.

“That’s been the one thing, trying to sleep a full night. There’s hardly been any sleep. Doctors say it has to do with the discomfort in my ribs so I’m hoping that will end soon.”

In the meantime, his friends and colleagues are happy to lend a helping hand.

“Allen is truly one of the hardest working musicians on the scene, and as a performer has always been a willing participant in fundraiser benefits to help others in need. During the Covid lockdowns, although his family finances were stressed, he organized a weekly live stream show, singing songs and bringing comfort to all attendees in NYC, Ireland, Australia, and beyond,” the GoFundMe in his name reads.

The live event on Saturday, February 11 is at The Joyce Public House, 315 West 39th Street, New York, and it starts at 2 pm. Suggested donation is $20, and more than 40 entertainers will be on hand throughout the day and night, including the Thirsty Bandits, the Narrowbacks, the Amadans, the Prodigals, the Diddley Idols, the Wadds, and many more. There will be prizes and a 50-50 raffle on the day.

Posted by The Joyce Public House on Friday, December 23, 2022

The Allen Gogarty fundraiser will also be live streamed via YouTube: