Cheerleaders and tailgate parties will be descending upon Dublin as Northwestern takes on Nebraska in the Aer Lingus College Football Classic this Saturday, August 27. 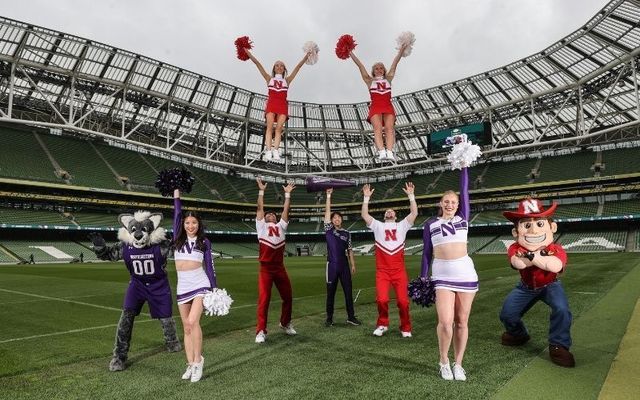 The Aer Lingus College Football Series will finally kick off this weekend in Dublin, with more than 10,000 Americans expected to travel to Ireland for the event.

The Northwestern Wildcats will take on the Nebraska Cornhuskers on Saturday, August 27 at 5:30 pm in Dublin's Aviva Stadium for a Week Zero game, the first regular-season international college football game in five years.

Want to know what to expect at the @AVIVAStadium this Saturday? We have a run down of the game of American football🏈⬇️ pic.twitter.com/TklYf5Lis6

Dublin is set to have a distinctly American flair on Friday afternoon when two pep rallies, one for each team, will be hosted at Merrion Park in city center. The Northwestern pep rally will run from 3 - 3:40 pm, followed by the Nebraska pep rally from 4:30 - 5:10 pm. Both, of course, will feature the teams' bands and cheer squads.

Then, on Saturday from noon, fans can flock to the official pre-game tailgating parties in - where else? - some of Dublin’s most iconic pubs. Fitzsimons Temple Bar will serve as the official locale for Northwestern, while Buskers Bar, ThunderRoad Cafe, and The Auld Dubliner are the official Nebraska bars.

The real action kicks off at the Aviva Stadium at 5:30 pm where organizers are expecting upwards of 30,000 attendees, including some 13,000 fans coming from the United States, AP reports.

As of Thursday evening, tickets for the Northwestern - Nebraska game in Dublin, which first went on sale in April, were still available on Ticketmaster.ie.

The visiting American athletes are soaking up the Irish culture ahead of Saturday's big game. Wildcats defensive back AJ Hampton Jr. tried some Irish step-dancing, while the Huskers visited the Guinness Storehouse.

Ireland has been extending a céad míle fáilte to American college teams for more than 30 years. In 1988, the Emerald Isle Classic saw Boston College beat Army at Landsdowne Road. In 1996, Navy returned to play Notre Dame in Croke Park for the Shamrock Classic. The two had a rematch in 2012, again dubbed the Emerald Isle Classic, in the Aviva Stadium.

The first iteration of the Aer Lingus College Football Classic was played at Aviva Stadium in September 2016, where Georgia Tech beat Boston College 17-14.

In 2018, the Aer Lingus College Football Series was officially unveiled. The series was supposed to begin in August 2020, featuring another Navy - Notre Dame matchup, but, thanks to the pandemic, it was called off and is now set to take place on August 26, 2023. The 2021 game between Nebraska-Illinois was played stateside, also thanks to the pandemic. The matches after 2023 have yet to be announced.

“We intend to kick off the season every year in Ireland,” John Anthony, founder of Anthony Travel and Irish American Events, the game’s organizer, told AP.

Ireland's Minister for Sport Jack Chambers is equally as optimistic. He told AP reporters: “The COVID backdrop obviously had an impact, but this is about getting it back and growing it over the next number of years.

“It’s something we’re committed to. We’re confident around the economic evaluation of this and the benefit it brings the country but also the opportunity it brings for everyone that’s coming, whether it’s tourism, enterprise, personal or business.”