Locals from O'Neill, the 'Irish capital' of Nebraska, are en route to Ireland ahead of the 2022 Aer Lingus College Football Classic this weekend in Dublin. 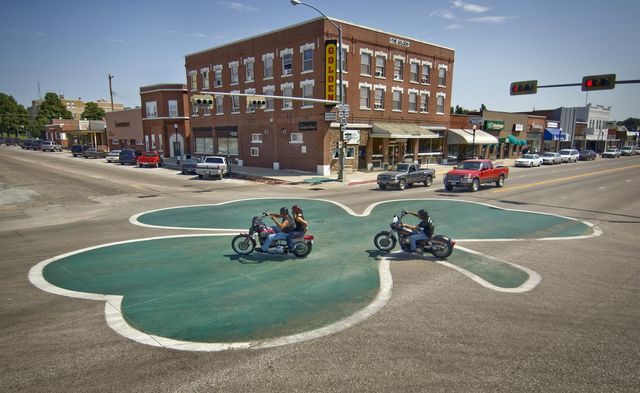 "The world's largest shamrock" at the heart of the Irish capital of Nebraska, the town of O'Neill. VisitNebraska

The Aer Lingus College Football Classic - where Nebraska will take on Northwestern - will see a sea of red and purple descend on Dublin this weekend... but they'll also be a lot of Irish American green.

Known as the Irish capital of Nebraska, O'Neill, a town founded by Co Monaghan-born Fenian General John O’Neill, is gearing up for the Aer Lingus College Football Classic, taking place this Saturday, August 27, at the Aviva Stadium in Dublin.

Natalie and Phillip Butterfield, like many folks from O'Neill, are wildly passionate Nebraska Huskers fans, but this Saturday, they'll be proudly wearing their red jerseys as well as some silk leis to rejoice in their Irish roots. 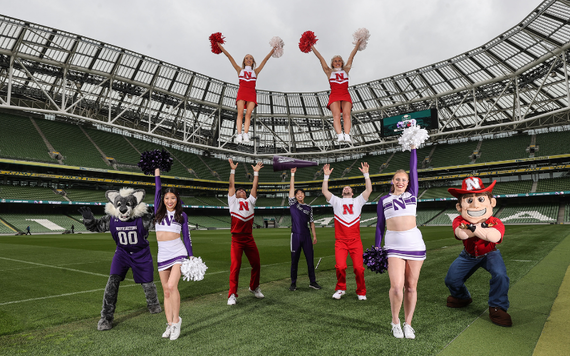 The Irish roots of O'Neill, Nebraska

General John O’Neill wanted to find somewhere in North America where Irish emigrants could build a community and thrive. A devoted Fenian, the Co Monaghan-born O’Neill emigrated to America in 1848 at the height of Ireland’s Great Hunger. He enlisted with the Union and fought in the American Civil War, though it is for the Irish invasion of Canada that he is best remembered.

In 1866, the Fenian Brotherhood gathered to invade British Canada with the intention of using it as leverage for Irish independence. As the story goes, when the group gathered to prepare, the man intended to lead the fighters into Canada was a no-show, so General O’Neill took charge. He led the first Fenian invasion of Canada on June 1, successfully capturing Fort Erie and giving Canadian troops some cause for concern before withdrawing back into US territory on June 3. In 1870 and 71, he participated in two further raids – the Battle of Trout River and the Pembina Raid. After the second, he was imprisoned, serving time in Vermont.

While in prison, O’Neill began dreaming up a plan to start an Irish colony in the US. In a letter from that time, he wrote “I have always believed that the next best thing to giving the Irish people their freedom at home is to encourage some of them to come to this country either from choice or from necessity to take up lands and build homes in America.”

In April 1874, a small group of colonists arrived in Nebraska with General O’Neill, and thus O’Neill, Nebraska was born. The following winter, General O’Neill returned to the eastern US to recruit more potential colonists, and did the same again in 1876, leading over 100 people back across the US with him. O’Neill died in 1878 of a paralytic stroke, but the citizens of his namesake town persevered.

Natalie Butterfield, speaking to the Journal Star before traveling to Ireland for the college football match, said that her great-great-grandfather, who was a coal miner in Scranton, Pennsylvania, followed O'Neill to Nebraska in 1877

Natalie is thrilled to be traveling to her ancestral home. She told the Journal Star: "I’m not sure we would have made a trip like this without the Husker game being here."

In Ireland, the Butterfields will present a banner to O'Neill's sister charity, Blessington in Co Wicklow. Blessington is also the home of Gerry O'Neill, General John O'Neill's great-grand-nephew. Gerry has been to visit the town of O'Neill on more than one occasion. The last time was in 2019 when a flood almost put a kibosh on the town's St. Patrick's Day plans. The parade did go ahead, along with a fundraiser for those affected by the flood.

Speaking about Gerry O'Neill, Natalie said: "Having a keen interest in John O’Neill myself we had lots to talk about.

"We’ve kept in touch. When we found out the Huskers were playing in Ireland we determined we would go for our 25th anniversary.’’

"When’s the next time they’re going to do something like this?” said Michael.

The Huskers football team has arrived in Ireland ahead of the Aer Lingus College Football Classic on Saturday and say they are "feeling right at home."

4,000 miles away but feeling right at home pic.twitter.com/6slyhfQ86F

The Aer Lingus College Football Classic Nebraska vs Northwestern game will kick off on Aug 27, 2022 at 5:30pm. Find out more at collegefootballireland.com.

WATCH: New Rose of Tralee not bothered by tiara hoopla

Irish Rep's "The Butcher Boy" is a palpable hit