The 86-year-old former Archbishop of Boston resigned in 2002 after it was revealed he covered up child abuse committed by serving priests. 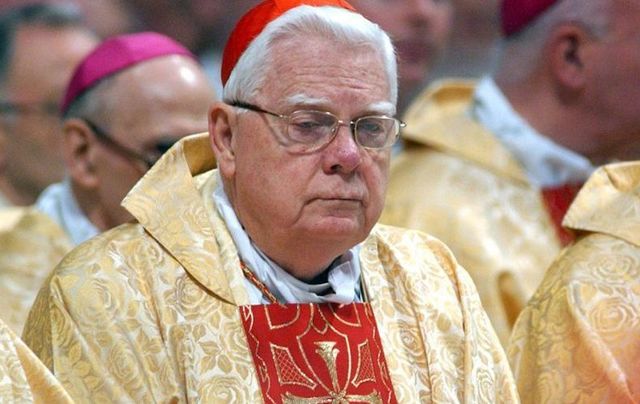 An initial attempt to resign in April 2002 was rejected by Pope John Paul II but when he was subpoenaed to appear before a grand jury in December that year his resignation was swiftly accepted.

He moved into exile in Rome where he was made arch-priest of the Rome Basilica of Santa Maria Maggiore. It was a ceremonial role with little real power and a far cry from the influence authority of his position in Boston.

Criminal charges were never brought against him but the revelations resulted in multi million dollars payouts to victims and severely damaged the Church’s moral standing - even among some of its most devoted followers, not least Boston’s large Irish Catholic population.

It was a huge fall from grace for the Harvard graduate who had returned to Boston with a reputation as a crusader for the poor and immigrants. As a young man he campaigned for civil rights in America’s segregated south but now his obituaries tell of a man who dropped the ball when faced with the church’s biggest crisis since the Reformation.

The Fifth Archbishop of Boston, Archpriest of St Mary Major, most powerful of American prelates, signal figure of the gravest crisis US Church has ever known, Bernard Cardinal Law died at Midnight Wednesday in Rome at 86 after days-long vigil https://t.co/PuLIB5mgAN pic.twitter.com/4Qlh3tVhhN

To survivors, Law was emblematic of a clerical culture that put a higher price on the reputation of the church than it did on preventing child abuse and helping victims.

In a statement to the press, SNAP, a victim’s group said

“No words can convey the pain these survivors and their loved ones suffered,” said a statement from SNAP, a victims’ group.“Survivors of child sexual assault in Boston, who were first betrayed by Law’s cover-up of sex crimes and then doubly betrayed by his subsequent promotion to Rome, were those most hurt.”