Cara Loughran, an Irish American teen killed during the Parkland shooting in 2018, was looking forward to so many things, family friend Isabel Dalu said in court during a victim impact statement. 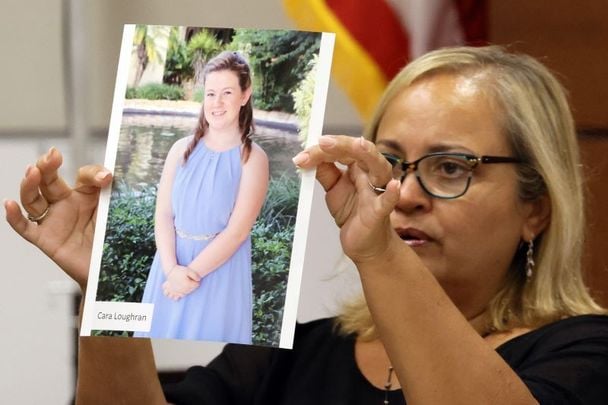 August 3, 2022: Family friend Isabel Dalu holds a photograph of Cara Loughran before giving a victim impact statement on behalf of the Loughran family during the penalty phase in the trial of Marjory Stoneman Douglas shooter Nikolas Cruz at the Broward County Courthouse in Fort Lauderdale, Florida. Getty Images

Cara Loughran, whose father Damian is from Co Antrim, was looking forward to visiting Ireland before she was senselessly murdered during the shooting at Marjory Stoneman Douglas High School in Parkland, Florida in February 2018.

Loughran was looking forward to so many things before her death, including the upcoming St. Patrick's Day Irish dancing performances, family friend Isabel Dalu told the court during her victim impact statement delivered as part of the sentencing phase of gunman Nikolas Cruz's trial on August 3.

Cruz, now 23, last year pleaded guilty to 17 counts of premeditated murder and 17 counts of attempted murder for when he opened fire at Marjory Stoneman Douglas High School in Parkland, Florida on February 14, 2018, just days before Loughran's 15th birthday. Cruz could face the death penalty for his crimes.

An emotional Dalu said she was "blessed and honored to have been a part of Cara Marie Loughran’s life" while reading the victim impact statement on behalf of herself, Loughran's parents, and Loughran's older brother Liam, who was a student at the high school the day of the shooting but escaped.

“She loved the beach, she loved to surf, and most of all, she loved spending time with her family," Dalu said of Loughran.

“Cara had a super close relationship with her parents and her brother; they all loved spending time together. Losing Cara has left a crushing absence in their lives.

MOMENTS AGO: Isabel Dalu reading about Cara Loughran, 14: “..Cara dreamed of going to homecoming, prom. She dreamed of graduating at the top of her class with all of her loved ones watching. But Cara didn't make it to any of these milestones.” #NikolasCruz https://t.co/8laypUNsOR pic.twitter.com/10YRYIrZ3K

“Cara had a huge family whom she loved dearly and they all loved her just as much.

“She was looking forward to her family’s vacation to Ireland in the summer of 2018, where she would be spending time with the family she had there. She was excited to see the ones she had already met in person, and meet the ones she had only spoken with via phone or FaceTime.

“Cara had many friends, one of them my own daughter. Cara was her first friend and the big sister she didn’t have.

“Her school friends remember how much they liked her and what a great friend she was. They loved her optimistic personality, her bright, beautiful smile and kind heart. They speak of the difference she made in their lives and how much they miss her.

“Cara was excited for her upcoming 15th birthday and the celebration she had planned with her friends and family.

“But Cara didn’t make it any of these milestones.

“Cara had started Irish dancing again. She had convinced my daughter to try it with her, and they both stayed on. Cara was looking forward to performing at the St. Patrick’s Day festivities. My daughter has continued Irish dance to honor Cara’s memory. Our dance school now honors Cara’s legacy with a feis named after her, the Cara Dances On feis. We honor her memory by awarding educational scholarships to dancers. All of our dancers are proud to honor Cara through dance.

“On March 11, 2017, Cara made her confirmation. She chose me as her sponsor and I was beyond honored. I wrote a letter for her to read before she was confirmed, a letter in which I talked about her bright and amazing future, a letter in which I promised that I would always be there for her, no matter what.

“Cara meant the world to me and I miss her terribly. So do her parents, family, and friends.”

The day after the Loughran's family statement was read in court, jurors and members of the media were taken inside of Marjory Stoneman Douglas High School's 1200 building, the scene of the shooting which has been sealed and undisturbed since February 2018.

"A faint trail of blood traces the path of the girls' bodies from the alcove where their bodies fell after being shot. A pool of blood is observed in the alcove outside [room] 1249 where Pollack and Loughran died. They remained there, injured, after the rest of the group that was huddled in the alcove with Ernie Rospierski fled down the hallway. Then Cruz returned and shot them again."

The state rested its case against Cruz after the tour of the crime scene.