Officers in Florida currently can't establish any relationship between Bryan Riley and his victims, which include a couple, their 3-month-old son, and the boy's grandmother. 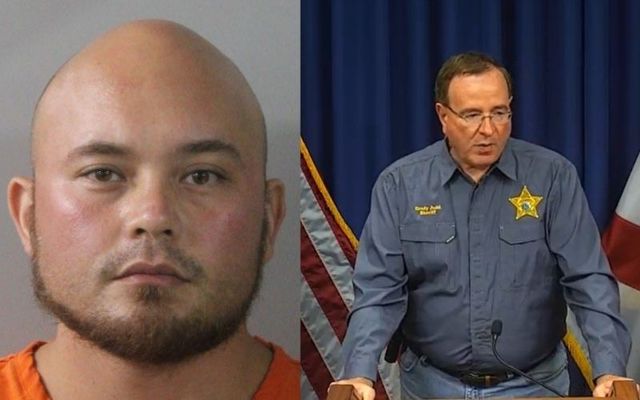 Bryan Riley, who authorities say fatally shot four people including a baby, killed a dog and injured an 11-year-old girl outside of Lakeland, Flordia on Sunday, September 5.

Investigators say that when they captured ex-Marine veteran Bryan Riley, 33, outside the Florida, home where he allegedly killed a couple, their 3-month-old son and the boy's grandmother, he told them, "You know why I did this."

According to Polk County Sheriff Grady Judd at a press briefing yesterday, September 7, officers can't currently establish any relationship at all between Riley and his victims.

Riley is being held without bond on four counts of first-degree murder. CBS News reports that during his first court appearance Monday, Riley said he intended to hire a lawyer; a public defender was appointed to represent him until he does.

Judd identified Justice Gleason, 40, as one of the victims and according to the officer about nine hours before the attack, Riley stopped his truck and confronted Gleason as he mowed his lawn. Riley, who lives 30 miles away, told Gleason that God had sent him to prevent a suicide by someone named Amber.

Gleason and one of the other victims told Riley no one by that name lived there and asked him to leave. They called 911, but when authorities arrived, Riley was gone. A deputy searched the area, but didn't find Riley.

Riley returned around 4:30 a.m. that night and shooting soon began. A deputy in the area heard the gunfire and sounded the alarm, bringing state and local law enforcement officers to the scene.

More photos from the scene of the quadruple homicide in #Lakeland https://t.co/D6DOaLLc7u pic.twitter.com/KNuIIqNhXh

When they arrived, they found an apparently unarmed Riley outside, dressed in camouflage, and his truck ablaze. Riley and the officers exchanged heavy gunfire, with dozens "if not hundreds of rounds" fired, before Riley retreated back into the home, Judd said.

Riley eventually came out of the house, the sheriff said. He had been shot once and was ready to surrender.

Officers heard cries for help inside and rushed in and grabbed the wounded girl, who told authorities there were people dead inside.

The young girl was in stable condition on Tuesday morning, the sheriff’s office said. A family statement said she has already undergone four surgeries to repair ten wounds but is alert, reading and writing.

The suspect's girlfriend of four years told officers that Riley had served in Iraq and Afghanistan and suffered from PTSD. She had never seen him violent but said that he had become increasingly erratic.

Riley had no criminal history and also told authorities he was on methamphetamines.

His vehicle had also been stocked with supplies for a gunfight, authorities said, including bleeding control kits.