British vet, 80, on trial in Northern Ireland for Troubles-era killing

Former British soldier Dennis Hutchings, 80, is accused of shooting John Patrick Cunningham, 27, in the back and killing him in Co Tyrone in 1974. 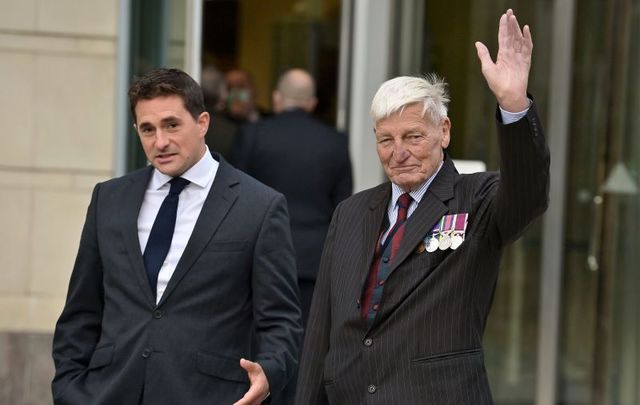 October 4, 2021; Dennis Hutchings (R) waves as he arrives at Laganside Court alongside former Conservative minister Johnny Mercer (L) in Belfast, Northern Ireland. Hutchings, a former member of the Life Guards regiment, has denied a charge of attempted murder in relation to the death of John Pat Cunningham, a 27-year-old man with learning difficulties who was shot dead as he ran from an Army patrol near Benburb, County Tyrone, in 1974. Hutchings has been a high-profile campaigner for veterans of the Northern Ireland conflict to receive greater protections from criminal prosecutions. Getty Images

In what could be the last trial of a British soldier for an alleged crime in Northern Ireland during The Troubles, the prosecution finally opened its case in Belfast this week into the shooting death of a man 47 years ago.

Former soldier Dennis Hutchings, 80, who is on kidney dialysis three times a week and is reported by the Daily Mail to have months to live, has been charged with the attempted murder of John Patrick Cunningham.

The 27-year-old, described in court as having the mind of a child, was fatally shot in the back while running away from a British Army patrol in Co. Tyrone in 1974. He was said to be afraid of the military and people in uniform.

Hutchings has been part of a campaign to stop prosecutions of military veterans.

British ministers are preparing to introduce a de-facto amnesty for all those accused of unsolved crimes from The Troubles despite controversy surrounding the proposals.

The legislation is intended to put an end to future prosecutions of military veterans and paramilitaries, but it will not apply to those already going through legal proceedings.

On the breast pocket of his suit jacket, Hutchings, who was in the Life Guards Regiment, wore four military medals including one he was awarded while deployed in Northern Ireland. He had failed in a legal bid to be allowed to wear his military uniform in court.

He also lost a Supreme Court case in 2019 to have his trial heard by a jury. Instead, the non-jury case was meant to go ahead in Belfast in 2020 but was canceled until this week due to the Covid-19 pandemic.

Accompanying Hutchings into court was the Conservative MP and former army officer Johnny Mercer who campaigns against the prosecution of military veterans who served in Northern Ireland during The Troubles.

Hutchings, from Cornwall, denies the attempted murder of Cunningham. He also denies inflicting grievous bodily harm on the dead man.

A lovely day in Belfast, marred by the grotesque unfairness in this process that benefits no-one except the legal profession - who are making a lot of money out of families and veterans, all aided and abetted by pathetically weak politicians.

Prosecuting counsel Charles MacCreanor told the court that a local parish priest had said Cunningham had “the mind of a child.”  The shooting was unjustified and went “beyond the army’s own rules for engagement.”

MacCreanor accepted that the case against Hutchings was circumstantial. He is not facing a murder charge because there was no forensic evidence to identify which bullets struck the victim. These bullets, the court was told, were never recovered from the scene of the shooting.

The court was told that on the day of the shooting the victim was walking on a rural road near his home when two army Land Rovers came around a corner and met him.

MacCreanor said that soldiers on the patrol had described the victim as seeming “startled, confused or surprised.”  He said that the victim began to run and climbed over a gate into an adjoining field.

Hutchings gave chase along with another soldier who is now dead. The second soldier, named as Soldier E, in previous statements said he had overtaken Hutchings in the chase.

Soldier E said he had cocked his weapon when Cunningham turned around with his hand inside his jacket. The court was told he then heard a shot fired from behind him, then several others, and saw Cunningham fall to the ground.