"Brian Burns was a unique human being who believed he was placed on this earth to do good and to encourage others to do better." 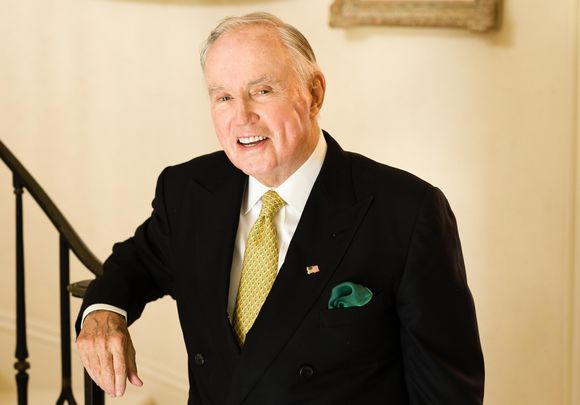 Brian P. Burns, Irish American business leader, art collector, and philanthropist has passed away, aged 85. He is survived by his loving wife, Eileen, and eight children.

Brian Burns’ father John was one of Joe Kennedy Senior’s closest political advisors and Brian often caddied in golf games for John F. Kennedy, in Palm Beach, Florida, where both families had homes.

He was asked, in 2017, to become Ambassador to Ireland by President Donald Trump but had to decline for health issues. He handled many real estate issues, especially those relating to the Florida resort, Mar A Lago, for Trump.

He will especially be remembered for his leading role in bringing the two great Irish American philanthropic groups, The Ireland Fund and the American Irish Foundation, together in a major consolidation of Irish philanthropy, in 1987. President Ronald Reagan presided over the coming together.

He and his wife, Eileen, were among the most philanthropic donors to Irish causes in the world from giving to the American Ireland Fund to creating the incredible John J. Burns Library at Boston College, which is world-renowned.

Burns was a nationally regarded business executive, attorney, and philanthropist. He was the chairman of BF Enterprises Inc., a publicly owned real estate holding and development company.

He was inducted into the Irish America Hall of Fame, in 2013, along with Vice President Joe Biden.

He is widely regarded as the man who put Irish art on the map. At a time when the obsession was with literature and Irish writers, Burns quietly gathered the greatest collection of private art, now mostly at the Burns Library in Boston College, and revived the entire genre.

A Massachusetts native, he was the fifth of seven children born to John J. Burns and his wife, Alice. Burns.

He traced his roots to County Kerry and was a graduate of The College of the Holy Cross. He also graduated from Harvard at the age of 23.

He holds some of the most famous Jack Yeats paintings, as well as paintings by Sean Russell and other leading artists.

He was the leading fundraiser behind the effort to restore the world-famous Marsh’s Library, at St. Patrick’s Close in Dublin, the oldest public library in Ireland. He also founded an American Law Library, at University College Cork.

Additionally, Burns has established or donated significantly to many cultural and scholastic institutions. In 1986, he founded The Honorable John J. Burns Library of Rare Books and Special Collections, at Boston College in memory of his father.

Works from his renowned personal collection of Irish art have been exhibited at Dublin’s Hugh Lane Gallery, the Kennedy Center in Washington DC, the Yale Center of British Art in New Haven, Connecticut, and the Phoenix Art Museum, in Arizona.

Burns was featured in writer Patricia Harty's 2000 book, "The Greatest Irish Americans of the 20th Century."

He was a principal benefactor of the first Irish Famine memorial in Cambridge, Massachusetts, which was dedicated, in July 1997, by former Irish President Mary Robinson. In 2012, he donated a key Famine-era painting from his collection to Quinnipiac University’s Ireland’s Great Hunger Museum, in Connecticut.

“Brian Burns was a unique human being who believed he was placed on this earth to do good and to encourage others to do better. He was a Renaissance man who was skilled in so many areas yet he retained a humble and modest presence which endeared him to so many," said Niall O’Dowd Founder of IrishCentral and close friend of Burns.

“Ní fheicimid a leithéid arís.” ("We shall never see his likes again.”)

Below is footage of Brian Burns being inducted into the Irish America Hall of Fame: