Learn how Irish Famine immigrants created an everlasting home for Irish-Americans and influenced every aspect of the city from construction, food, and humanitarian aid. 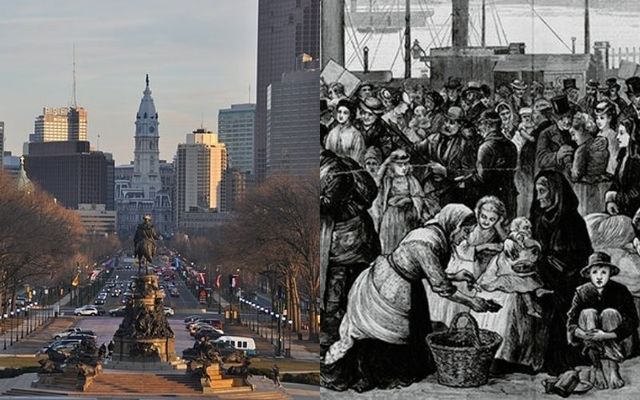 Famine immigrants arrived in Philadelphia from 1845 onwards and left a lasting influence on the city that can still be seen today- from schools, business, and even food.

The Irish in Philadelphia

There was already a strong Irish community in Philadelphia pre the Irish famine that brought thousands of Irish emigrants across the Atlantic to the United States.

By the beginning of the 19th century, there were 5,000 Irish-born living in Philadelphia, many of them veterans of the Irish Volunteers who had taken part in the failed Irish uprising in 1798.

With an already established Irish population in Philadelphia, a group called The Society of the Friendly Sons of St. Patrick was founded in the city in 1771.

They were one of the benevolent organizations to extend aid to the thousands of Irish who made the treacherous trip in 'coffin ships' to the port of Philadelphia and cities across America following the 1845 appearance of the potato blight.

By 1860, 95,458 Irish men and women were living in Philadelphia, making the Irish the largest single immigrant population in the city.

How the Irish changed Philadelphia

By 1857, the strength of the Irish presence was prominent in every aspect of the city. Historian and author of The Irish in Philadelphia, Dennis Clark, points out that 22 percent of the city’s grocers, 12 percent of its dry goods dealers, and 11 percent of its real estate agents had Irish last names.

Plus nearly all of the paving and construction firms in Port Richmond were owned by the Irish. And there were full-fledged Irish millionaires, like Colonel Thomas Fitzgerald, the son of immigrants and publisher of a weekly newspaper 'The Item', who left $3 million at his death.

The Irish also made a mark in the Philadelphia business sector. For example, John Barclay from County Donegal helped found the Insurance Company of North America in 1792. Joseph Tagert, born in County Tyrone, served for forty years as president of the Farmers and Mechanics Bank, which was founded in 1809 and became the largest bank in Philadelphia by the second half of the nineteenth century.

While Dublin-born Matthew Carey founded and served as the first secretary of the Hibernian Society for the Relief of Immigrants, which provided charitable aid to Irish immigrants arriving in Philadelphia.

Influence of the Irish in Philadelphia today

The Irish are responsible for establishing many Catholic institutions, such as St. Joseph's University, La Salle University, and Villanova University.

In celebrity culture one of the most prominent Irish Philadelphians was Grace Kelly, an acclaimed actress who became Princess of Monaco and whose father was Irish-American John B. Kelly Sr, triple Olympic champion.

While a unique and traditional Philadelphia confection is the Irish potato candy, yet despite its name, is not actually from Ireland and does not usually contain any potato. The candies have a coconut cream inside and are rolled in cinnamon on the outside, resulting in an appearance reminiscent of small potatoes.

The Irish Memorial is located adjacent to the southeast corner of Front and Chestnut Streets in downtown Philadelphia.

The bronze monument, which was sculpted by artist Glenna Goodacre and designed by award-winning landscape architect Pauline Hurley-Kurtz. Dedicated in 2003, it was built to commemorate the 150th anniversary of An Gorta Mor, the Great Hunger, and to recognize the contributions of the Irish to the city, state, and nation.

The Encyclopedia of Greater Philadelphia