Northern Ireland was created in May 1921 with the partition of Ireland. 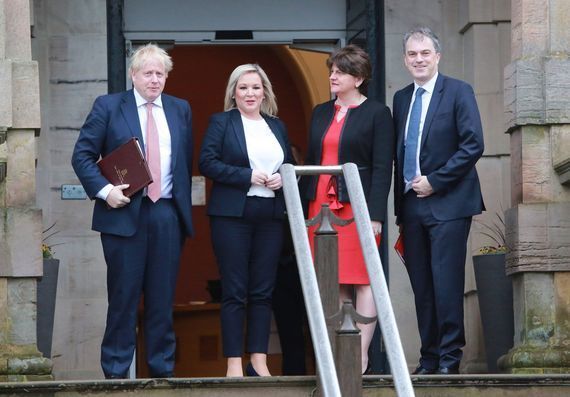 British Prime Minister Boris Johnson has claimed that the centenary of Northern Ireland should be celebrated in a "sensitive" way next year.

Northern Ireland was created in May 1921 after the partition of Ireland and plans are already underway to mark the occasion.

Johnson, however, said that any celebrations would have to be respectful to all communities in Northern Ireland.

Any celebration needs to be "sensitive to the point of view of all communities," Johnson said on his first trip to Northern Ireland since power-sharing was restored in January.

The British Prime Minister additionally addressed criticisms of plans to celebrate the event, saying that it would be "something to celebrate" for many people in Northern Ireland.

Johnson plans to establish a centenary forum and a historical advisory plan to mark the centenary with "the maximum possible academic focus and really try and get to the heart of the stories of all the possible perspectives."

Johnson met with First Minister Arlene Foster and Deputy Minister Michelle O'Neill at Hillsborough Castle during his visit to Northern Ireland and discussed plans to commemorate the centenary.

Michelle O'Neill, Sinn Féin's leader in Northern Ireland, criticized plans to hold the event, claiming that partition has "failed citizens socially, politically and economically" and said that partition was "not a cause for celebration."

Partition is not a cause for celebration

It has failed citizens socially, politically and economically

Any forum on the centenary must include an honest conversation on how we achieve better this decade pic.twitter.com/Oqz3NueEz2

O'Neill wants to mark the occasion by having "reflective and honest" conversations about partition and it's "failures".

"The north was built on sectarianism, gerrymandering and an inbuilt unionist majority and that is not something that I would ever celebrate," O'Neill said.

First Minister Arlene Foster, on the other hand, said that the centenary was something to celebrate for everyone in Northern Ireland and said that the event could be inclusive.

"It is important that we recognize the reality that Northern Ireland is part of the UK and has been for 100 years.

"It is important that we mark these next year centenary events in a way that does not cause offense and in a way that is inclusive," she added.