Danny O'Connell says members of the AOH are “absolutely committed” to supporting these and other legacy victims’ families in their battle for truth. 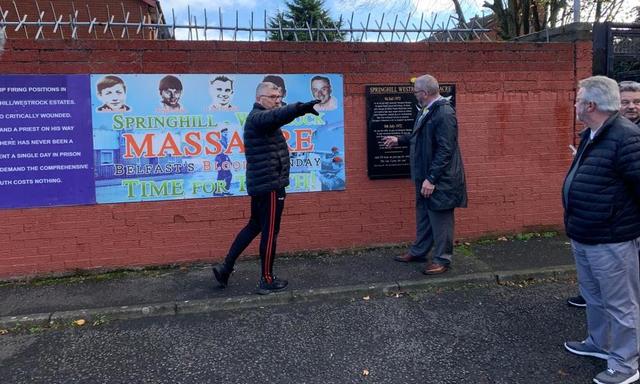 Last week, British Secretary of State for Northern Ireland Brandon Lewis said in the U.K. House of Commons that he is “absolutely committed” to legislate an amnesty for all Troubles killings, but Irish American leaders are skeptical.

Danny O'Connell, national president of the Ancient Order of Hibernians, who traveled to Belfast last week, pledged that the AOH is “absolutely committed” to supporting these and other legacy victims’ families in their battle for truth.

O’Connell said, “Three years ago I toured Ballymurphy and met families who insisted that 10 of their relatives, including a Catholic priest and mother of eight children were murdered. Ballymurphy just wanted their chance in an inquest court to challenge British excuses for massacring their friends and loved ones. The verdict proved that what these Ballymurphy families had said for fifty years was the truth, and all the British excuses for these murders were lies.

"Now the Springhill Massacre and New Lodge Six families want their day in an inquest court, while the Sean Graham’s Bookmakers families await an uncensored report by the Constabulary Ombudsman.”

O’Connell added, “The Springhill Massacre families said that an inquest would prove that on July 9, 1972, five people including a priest, three teenagers a father of six children were deliberately gunned down by British snipers and then smeared to justify their murder.

“The New Lodge Six families are confident that an inquest would exonerate their loved ones and prove that on February 3-4, 1973, British Army snipers or loyalists working in collusion with British troopers murdered six in the New Lodge.

“Relatives and survivors of the Sean Graham's Bookmakers massacre expect that an uncensored overdue ombudsman report would prove five victims were murdered in a clear case of crown force collusion with loyalists. Checkpoints by both the Royal Ulster Constabulary and Ulster Defense Regiment were set up near the scene, then withdrawn to make way for the attack.”

O’Connell added, “If the British did not know these families were right, why are they trying block the truth from coming out in an inquest court or a report by their own constabulary ombudsman? Why are they demanding censorship restrictions to bury the truth about joint action between British state forces and their loyalist criminal allies?

“I was given a full briefing and saw the locations of the killings with family members. I will report back to our membership across the United States, and we will bring this information to our elected representatives. The AOH will follow this briefing by series of initiatives for all of those fighting for legacy justice. We are announcing a 50 member American delegation that will meet these families in January.

"Victims’ relatives are entitled to get the truth about the killings of their loved ones. These families are never giving up. I am standing with them today to say the AOH and indeed Irish America will stand with them in their long battle to get that truth and justice.

“The British government negotiated the Stormont House Agreement with the Irish government in December 2014.  They did not keep their word.  They just refuse to keep it and then then solemnly say it is not working.

They made a 599 page withdrawal agreement with a Protocol and just refuse to keep that agreement.

“Why should anyone trust Britain to keep their word?”