Hundreds of people gathered outside the US Embassy in Ballsbridge, Dublin, in support of the Black Lives Matter movement. 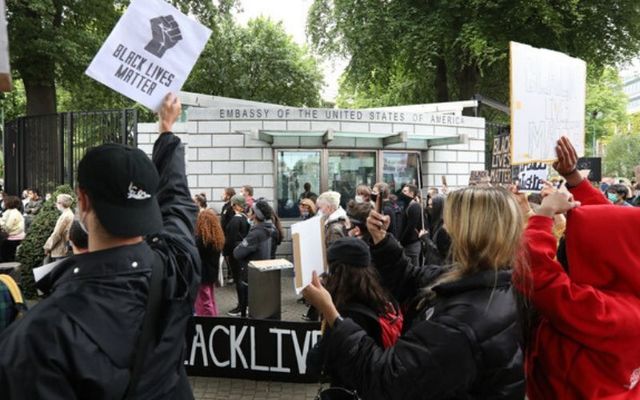 Protestors gather outside the US Embassy in Dublin. Rolling News

Anti-racism protests took place across Ireland on Saturday as citizens continued to rally around the Black Lives Matter movement following the death of George Floyd in Minneapolis.

Hundreds of people gathered outside the US Embassy in Ballsbridge, Dublin, in support of the movement with similar protests taking place in Limerick, Galway, and Belfast.

Organizers of the Dublin protest handed out PPE and urged participants to socially distance during the protest. The organizers also encouraged people living more than five kilometers from Ballsbridge to stay away from the protest to comply with Ireland's COVID-19 restrictions.

Lucky Khambule, of the Movement of Asylum Seekers in Ireland (MASI) attended the protest and said that the demonstration was in response to the death of George Floyd while in police custody, according to the Irish Times.

He said that protestors had gathered in solidarity with black people in America and all over the world.

He said protesters also gathered in support of the End Direct Provision movement in Ireland.

Direct Provision is a much-maligned system of housing asylum seekers in centers across the country. The system has been criticized by migrant groups and human rights organizations over the conditions in the centers, where multiple people often have to share bedrooms.

"So we are here standing and saying no to racism and direct provision. Let people live freely and be a happy family," Khambule said. 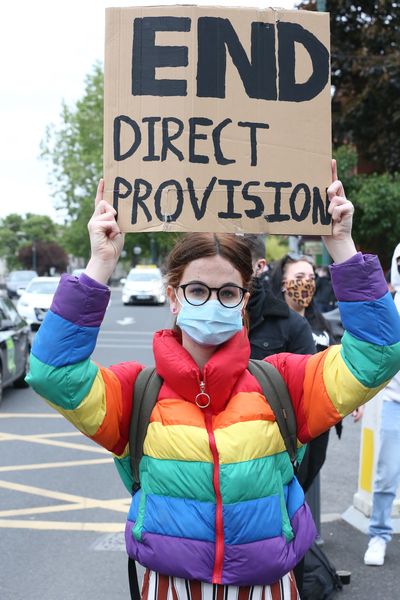 A protester with an "End Direct Provision" sign in Dublin. Rolling News

In Belfast, around 2,000 people gathered in support of the Black Lives Matter movement on Saturday.

Speakers at the rally condemned racism around the world and criticized those responsible for George Floyd's death.

Minister for Health Simon Harris said that he supported the cause of the protests and abhorred racism but said that it was not the time for thousands of people to congregate in a public space.

"Regardless of how just your cause is, now is not the time to have a mass gathering. And at the moment the rules are very clear about how many of us can congregate outside – it’s four, in a safe and socially distant way."

He encouraged people to make their views known by posting on social media and by writing to the US Embassy.

Gardaí additionally said that investigations are ongoing into a similar protest that took place outside the US Embassy last Monday. Thousands of people attended the rally and gardaí say they have been in touch with protest organizers to make them aware of social distancing regulations and guidelines.

Meanwhile, tens of thousands of people also protested across the United States on Saturday with the most notable protest taking place in the nation's capital.

More than a thousand protesters reportedly surrounded the White House, which has recently been barricaded with black metal fencing.

Police and military personnel observed the protestors, but the demonstrations were largely peaceful on Saturday.

Organizers distributed water to protestors due to the soaring temperatures around the US and also distributed hand sanitizer and PPE.

The protest in Washington was the largest gathering of protestors since the death of George Floyd on May 25.

President Donald Trump, however, who has been a consistent critic of the protests, said that the demonstrations in the capital were much smaller than anticipated. The President praised the work of the National Guard, the Secret Service and the Metropolitan Police Department for restricting the scale of the protest on Saturday.

Much smaller crowd in D.C. than anticipated. National Guard, Secret Service, and D.C. Police have been doing a fantastic job. Thank you!