Greg O’Brien was diagnosed with Alzheimer’s at 59. With the help of his family, writing & Irish roots, he perseveres 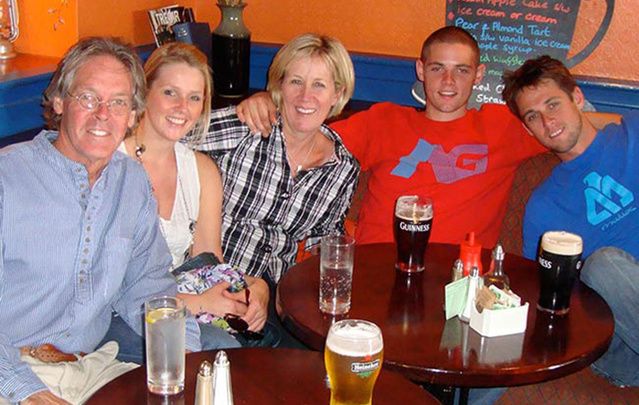 The O’Brien clan at a tavern on the Dingle Peninsula, West Coast of Ireland, August 2010 (from left) Greg, daughter Colleen, wife Mary Catherine, and sons Conor and Brendan. Greg O'Brien

When Greg O’Brien wakes up each morning in his Cape Cod home, he starts with the 5 Ws – the who, what, when, where and why central to journalistic inquiry.

He’s asked these questions many a time throughout his almost 40 years working as a reporter, editor and publisher. The difference is that now he’s asking them of himself.

O’Brien was diagnosed with early-onset Alzheimer’s five years ago, in 2009, at 59 years of age. The disease did not catch him by surprise – he watched his maternal grandfather fight it, then his mother. But he hadn’t expected Alzheimer’s to come knocking at his door quite so soon.

As he has since learned, he is not at all alone in this devastating experience. “The stereotype of an Alzheimer’s sufferer is 85 years old, in a nursing home, going to die soon anyway,” he told IrishCentral. “But Alzheimer’s is a disease that can take 20 years to run its course. There are people like me who have horrific short term memory, who don’t recognize where they are, and they’re in their 50s and 60s; they’re still active and working.

“Nobody wants to go there, everyone wants to ignore it or they’re afraid to talk about it. We need to lift the veil of denial.”

Citing the quote often attributed to the Kennedy political dynasty, O’Brien declares, “I’m Irish. I don’t get mad, I get even.” His way of getting even with Alzheimer’s? Turning his reporter’s eye on himself and writing a book with the hopes of shattering the stigma of Alzheimer’s through some very necessary conversation.

“It's a demon of a disease and my mission right now through my writing is to expose this demon, to give people with Alzheimer’s and their families hope that you can live with it.”

“On Pluto: Inside the Mind of Alzheimer’s” is a searingly honest tour-de-force. O’Brien intimately describes what it’s like to be him – his journey from barely acknowledged suspicions to diagnosis; from helping his mother through her battle with the disease to having the same painful conversation with his three children; from living as someone who prized his brain and intellect above all other qualities to someone who now believes the heart to be more reliable.

O’Brien grew up in Rye, New York, the eldest boy of 10 children in an Irish Catholic family. His parents were both second-generation Irish Americans. His father, Francis Xavier O’Brien, was born and raised in the Bronx and had roots in County Clare. His mother, Virginia Brown O’Brien, grew up in Manhattan with relatives in Wexford, Dublin and Derry.

From an early age, O’Brien was aware that his mother’s father, whom they affectionately called “Daddy George,” was struggling with something. “In time, I began to realize that something was terribly wrong with my grandfather,” he writes. “His sentences were becoming shorter as his voice trailed off. He didn’t recognize us on occasion, and he stared a lot in withdrawal. Often, he just shook his head, in an acknowledgment when asked a question. I thought he was hard of hearing.”

Decades later, his mother began to show similar symptoms. Initially, she simply refused to be sick. O’Brien’s father was suffering from circulatory disorders requiring constant care and medical attention. Over time, however, “Mom began sticking knives into sockets, mis­placing money, brushing her teeth with liquid soap, refusing to shower, not recognizing people she knew, hallucinating, and rag­ing at others, often directly at me.”

But his mother also gave him a road map for his own battle. “Unremittingly, she cared for my dad, always refusing to suc­cumb to disability. She encouraged me in my own progression; she taught me how to fight, how to live with Alzheimer’s, how never to give into it.”

When O’Brien received his diagnosis in 2009, his mother was still alive, in the last years of her own fight with the disease. In the weeks before her death, she told him “we all have a purpose in life. Go find it!” and O’Brien promised her at her deathbed that he would write about Alzheimer’s. “I said this starts and stops right here – we’re going to talk about it now in candid terms.”

O’Brien’s own experience with Alzheimer’s began with short term memory loss and confusion – not recognizing people or forgetting where he was. Then he sustained a severe head injury in a cycling accident, which, doctors explained, sped up his early onset. He learned that he carries variant ApoE4, the strongest genetic risk factor for Alzheimer’s.

O’Brien has also been diagnosed with prostate cancer, which he is not seeking treatment for. “It’s my exit strategy,” he said pointedly. “I watched my grandfather and mother fight this to the end, and I don’t want that. I know there isn’t a cure right now.”

Mary Catherine, O’Brien’s wife, has been with him every step of the way. One of the most wrenching scenes in “On Pluto” recalls the painful moment when O’Brien first tells their children - Brendan, Colleen and Conor – and, later, Brendan’s reaction to learning that his father had given him power of attorney. The family’s experience supporting O’Brien and grappling with what the disease means for them is captured in the short documentary “A Place Called Pluto,” directed by Steve James.

"A Place Called Pluto," directed by Steve James from David Shenk on Vimeo.

In the weeks following his diagnosis, O’Brien, a devout Irish Catholic, began to question his faith.

“The light went out in the early stages,” he said. “There was one day when I was writing in my office in Cape Cod, and I knew better but I got angry and I started throwing f-bombs at God, yelling ‘you don't give a shit!’ I was throwing so many f-bombs at the Lord I thought I was going to be turned into a pillar of salt.”

But then something happened. “I went out into the driveway and noticed the back tire on my yellow Jeep was flat, which made me even angrier. I drove a mile to a service station, you could hear the thump thump of the tire hitting the road. The attendant, who’d been in school with my son Conor, took care of it right away. A few minutes later he came back and said ‘I want to show you something.’ I was still angry so I said I didn’t care what had done it, but he showed me what he had pulled out of the tire. The culprit was a small piece of scrap metal, bent perfectly into a cross.

“I felt at that point the Lord saying “OK. You're going to die someday so maybe now that you know this we can do some things together. I decided that on the way out I might be able to do something special.”

He began by writing down everything about himself and his life. “I was afraid of forgetting all the memories, all the anecdotes. I collected almost 1,000 pages of notes and from there my gut told me this would be my book.”

There were points along the way when the task seemed too daunting, but O’Brien persevered. “Alzheimer’s is one of the biggest stories out there today, so shame on me if I don’t tell it. Do I like talking about it? No. Do I need to talk about it? Yes. It’s a personal and journalistic responsibility.”

O’Brien acknowledges that there are many great books about Alzheimer’s already out there. Lisa Genova, the neuroscientist/novelist who wrote “Still Alice” (adapted into the widely acclaimed film starring Julianne Moore) was immensely helpful to him and penned the preface to “On Pluto.”

“But,” he added, “I'm finding that people now want to hear from the front row.”

The view from the front row is hard to take. O’Brien depends on his laptop and his iPhone, to keep notes, to tell him where he is, even sometimes for the meaning of a word when he can’t recall it. At times, up to 60 percent of O’Brien’s short-term memory is gone. He experiences intense rage, he sees things that aren’t there, he falls into depression, he has moments where he doesn’t recognize his closest family members. It’s a tormentingly gradual process, too, “like having a sliver of your brain shaved off every day, or death by 1,000 cuts.”

Tough as it is, with an estimated 35 million people worldwide suffering from Alzheimer’s today, it’s an important view to share. The feedback and connections since “On Pluto” was released last August have been profound. O’Brien recalled one chance encounter at Boston’s Logan Airport:

“In November, on my way back from Ireland, when I got off the plane I had to make a lot of phone calls so I worked out of a restaurant there at Logan. All of a sudden I noticed a young woman was looking at me and I saw that she had a copy of ‘On Pluto.’ She was there at the airport picking up her relatives from Wexford for a family gathering and she had just given a copy of the book to her father. I talked to him for a while and it turned out he had early onset like me, we cried a little and had a really good talk.

“Then a few days later I got an email from his daughter inviting us over to her family’s place in Duncannon, so in July we're going over to spend a week in Wexford with her father.”

Ireland, where he wrote parts of “On Pluto,” offers O’Brien peace and comfort. Since his parents passed away, he made a promise to visit at least once or twice a year. “It’s a soul searching trip for me,” he said. “I feel a part of Ireland, I feel at peace in Ireland. It makes me feel like I’m going home.” The family usually travels along Ireland’s western coast – to Galway, the Cliffs of Moher, Dingle, the Ring of Kerry, Kinsale and Cork – before taking the train to Dublin.

O’Brien credits his Irish heritage with helping him place more faith in his heart as his brain becomes less dependable. “I don't trust my brain anymore. It used to be my best friend and now I don’t see any chance of reconciliation,” he said, “so I write and speak from the heart. I think the Irish have always done that, whether it's poetry or prose.”

Besides, he added, “memory isn’t all it’s cracked up to be. We all remember different things – how big was that fish again? Was it really a sunny day? I could give a speech to a crowded room and two people will give different accounts. The essence is the heart.”

To learn more about Greg O’Brien and “On Pluto,” visit his website here.

For information about Alzheimer's disease, check out the National Institute on Aging fact sheet.