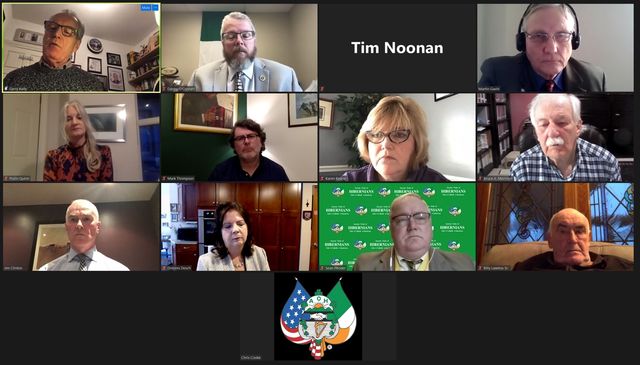 More than 3,500 family members, fighting for truth about loved ones murdered during the conflict, appealed for Irish American support on a live webinar hosted by the Ancient Order of Hibernians last weekend.

Spearheaded by Relatives for Justice, an open letter seeks to get the Stormont House Agreement implemented and halt British proposals that would shut down paths to legacy truth in order to protect British troopers, constabulary, and agents.

During three decades of conflict, British forces had impunity, and those who had family members killed by British forces or agents often had a palpable fear of being targeted if they dared to speak out. Families began to campaign, or use inquests or other legal avenues to get the truth but were deliberately blocked. The British changed the rules and moved goalposts to keep a lid on the real nature of the role of its forces during the conflict.

“Now six years after an international agreement between the Irish and British governments backed by the Stormont political parties, Britain wants to renege. These families are today appealing for American support to make Britain keeps it word,” Thompson said.

Poilin Quinn's brother, John Quinn, was murdered at Boyle's Bar, in Cappagh, Co. Tyrone, with Malcolm Nugent, Dwayne O'Donnell, and Thomas Armstrong on March 3, 1991 with weapons linked to a number of other collusion murders in East Tyrone.

John had been born into a state which had seen sectarianism, internment, hunger strikes, plastic bullets, torture, and beatings by crown forces. One week before the killing, British troopers had searched the bar and parking lot and got a layout used to carry out the murders.

Poilin and other family members want to know “why their relatives were targeted for murder. The British government had provided nothing but smokescreens, bad faith and dishonesty,” she says.

Her issue was “not so much with those who pulled the trigger as it was with the government who researched, funded and drove a policy of collusion.”

She noted that if the Irish government remains silent, silence will become consent.  Her mother and another brother never lived to see the truth, but she and her family will fight for it and get it.

Jim Clinton's wife, Teresa, was murdered in their home off the Ormeau Road in Belfast in April 1994.  He noted that he lived a few streets from prominent AOH member Malachy McAllister and had gone to his house after a loyalist attack on McAllister’s home.

Jim was upstairs when he heard loud bangs He ran downstairs and found Loyalists had thrown a concrete block through his window, then shot Teresa at point blank range. The killers sped away but the Royal Ulster Constabulary, instead of following the killers, stopped outside his door.

The RUC member who came to his door had repeatedly harassed the Clinton family.   Three witnesses who saw and wanted to identify the killers went to the RUC barracks.

The RUC then read out the names and addresses of the witnesses in front of a well-known loyalist. This meant that the witnesses would now be targeted.

The weapons used in the murder were a British Army issued sterling submachine gun and an RUC Ruger pistol.

Jim spoke about how upsetting the memories are even today.  Even today his children and grandchildren are grieving for their lost grandmother. It was very difficult to speak but was doing it because it was important for his family and all of the families to get the truth, he said.

In December 2014 the British and Irish governments entered the Stormont House Agreement which offered bereaved families hope of legacy justice. The formal agreement, supported by the Stormont political parties, pledged four new legacy bodies including a historical investigations unit, which could investigate controversial conflict killings including those by British forces or collusion killings. It also proposed an independent commission on information retrieval, an oral history archive and an implementation and reconciliation group.

In January 2020 the British government, in the New Decade New Deal agreement, promised to introduce new laws fulfilling the Stormont House Agreement within 100 days. None of these promises or agreements were kept.

He said, “The British know the truth, they just do not want to tell it,” and asked Irish America to back the families.

AOH National President Danny O'Connell called on some of the Irish leaders who had joined the program. Former congressman and co-chair of the Ad Hoc Committee for the Protection of the Good Friday Agreement Bruce Morrison said that the Good Friday Agreement did not end with establishing a Stormont Assembly. It included a framework to resolve other issues including legacy, and his committee would be working on that very closely.

Former senator Billy Lawless said it was important for everyone to hear and understand the stories of those seeking legacy justice. Peter Kissel of the Irish American Unity Conference pledged support, and AOH Vice President Sean Pender, Ladies AOH President Karen Keane, and LAOH Freedom for All Ireland Chair Dolores Desch also appealed for a united effort. Members of the Brehons and Irish Northern Aid were also on the call as well as Hibernians across the United States.

AOH National Freedom for All Ireland Chairman Martin Galvin said, “It was impossible not to be moved by the words of Poilin Quinn and Jim Clinton. It is crucial to remember that they spoke as representatives of more 3,500 family members who share the same heartfelt grief and demand for justice. Some of these families have been fighting for the truth for more than 50 years. They think that Irish America is crucial to help make Britain keep its word on legacy justice. We must not let them down!"