Alex Collins, running back for the NFL's Seattle Seahawks, is continuing his Irish dance training on the side to keep him in his best shape. 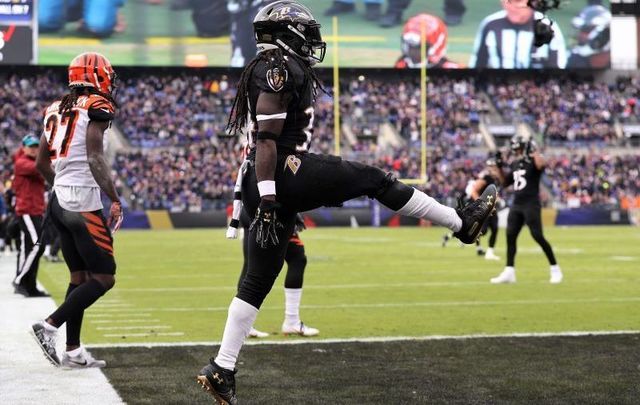 November 18, 2018: Alex Collins, then playing for the Baltimore Ravens, celebrates with some Irish dancing after scoring a touchdown against the Cincinnati Bengals at M&T Bank Stadium in Baltimore, Maryland. Getty Images

Alex Collins of the NFL's Seattle Seahawks is working hard at training camp in hopes of showing off a few of his famous Irish dance steps on the football field this season.

“The fans have been wanting to see the Irish dance,” Collins told The Seattle Times this week, “so I’ve been coming up with new ways to show out.”

The newspaper notes that Collins has had a "solid showing" during the first few weeks of training camp with the Seahawk, meaning he likely "have a few more chances to celebrate with his dance steps this season."

Further, Collins showed up to training camp looking noticeably leaner, thanks in large part to his Irish dance training on the side.

Collins first started Irish dancing back in 2016, the same year he was selected by the Seattle Seahawks in the fifth-round pick in the NFL draft. He later spent two seasons with the Baltimore Ravens before re-signing with the Seahawks in 2020, taking Irish dance with him every step of the way.

First introduced to Irish dancing by his high school football coach's 15-year-old daughter in Florida, Collins was initially skeptical of the benefits of Irish dancing, but he soon began making weekly visits to Drake School of Irish Dance in Fort Lauderdale to improve both his dancing and football technique.

“It is all about rhythm and timing in Irish dance, and so it is for the running back as well,” Collins said back in 2016.

In 2018, his love of Irish dance brought him to none other than Ireland, where Collins, of course, seized the opportunity to show off his steps with some of the best of the best Irish dancers around.

His love of Irish dancing has quickly become his trademark celebratory move when the running back makes a touchdown. In July, Collins shared this positively smile-inducing video on Instagram featuring his Irish dance moves on the gridiron.

"Who ready to see some [Irish dance] this season?!," Collins said in his post.

"I learnt from the best, Drake Fort Lauderdale! I’m excited to have the fans back in the stands, plus we got the best 12th man."

By all accounts, the Drake School of Irish Dance, which has locations in both Florida and Georgia, loves having Collins as a student as much as he loves learning the traditional steps.

Back in 2019, the Irish dance school sent a special birthday wish to Collins, making sure to note that, yes, boys (Irish) dance, too.