Alex Collins of the Baltimore Ravels uses Irish dancing to improve his game. He's also become a hero to a young Irish dancing boy who was being bullied. 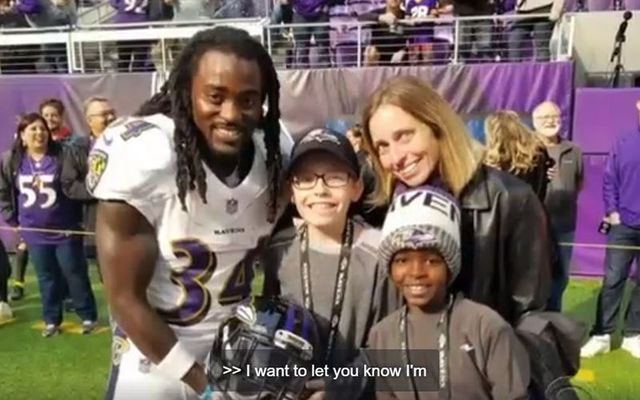 Baltimore Ravens running back Alex Collins uses Irish dance to improve his game, keeping him fleet of foot against his opponents.

In doing so, he has not only delighted Irish dance and football fans alike, but he's also become a hero to one young Irish dancer in particular - and they just got to meet in person.

Carl Tubbs, a talented young dancer, was feeling discouraged after being bullied about his love for Irish dance - which, as Collins knows, is extremely athletically demanding.

Carl's mother, Joanne, reached out to Collins on Twitter hoping he might offer some words of encouragement, and Collins sent Carl a seriously empowering message, telling Carl not to give up on his dreams.

Then, Carl got to meet his hero in person on the sidelines during a Ravens game. (Scroll ahead to 1min, 15sec to see their awesome chat)

"I want you to know that I'm proud of you, man. I'm going to be following your career," Collins told him.

Tubbs said that Collins' encouragement has "really encouraged me to keep on going with Irish dance."

Collins said it feels amazing to be making a difference in someone else's life.