Our favorite Irish-dancing Baltimore Ravens running back Alex Collins has returned to the headlines because of his wondrous Irish dancing skills. 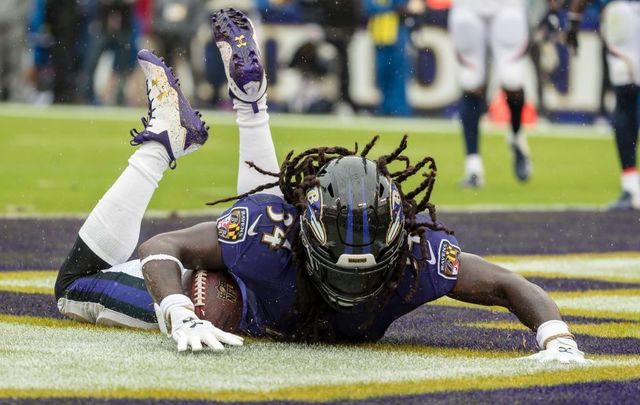 Alex Collins #34 of the Baltimore Ravens scores a touchdown against the Denver Broncos during the first half at M&T Bank Stadium on September 23, 2018, in Baltimore, Maryland. Scott Taetsch/Getty Images

A great Irish dancer and an incredible advocate for Irish dancing in the US, Baltimore Ravens running back Alex Collins became an even bigger champion of the art-form back in 2017 when he came to the rescue of a young Irish dancer who was being bullied for his interest in traditional Irish steps.

Collins has shown an interest in Irish dancing since 2011 when he was introduced to the dance by his high school coach’s 15-year-old daughter. After an ongoing debate as to whether Irish dancing was physical enough to be classed as a sport, Collins was challenged to take on a class, quickly becoming utterly enamored with his "one, two, threes," and deciding to keep practicing to build up his strength and conditioning.

At 5-foot-10, 217 pounds, and an NFL star, then 23-year-old Collins may have taken a fair bit of ribbing from teammates and from the public about the time he spends Irish dancing but he has shone through as a great representative of men in Irish dancing, not allowing the skill and physicality involved to be belittled.

As an inspiring figure to younger boys with an interest in the NFL, Collins also had a heartwarming message for a young male Irish dancer, Carl, who was facing some bullying for attending classes.

When approached by the young dancer’s mom Joanne Tubbs on Twitter telling him the story, Collins replied, “Never stop doing the things you love because someone else doesn't agree. Chase your dreams Carl and don’t let them stop you from being great!”

“Big smile tonight from Carl. Thanks for the encouragement and support - I think you also have a new no. 1 fan :-),” his Mom responded.

Still dancing himself under the name “Mitch Finn,” a play on Lord of the Dance star Michael Flatley, Collins continues to be passionate about how Irish dance can improve his game.

What do you make of Collins' Irish dance skills? Do we need more people of his stature to speak for its benefits? Let us know your thoughts in the comments section.