NFL player Alex Collins stepped out alongside some talented Irish dancers for an impressive performance to Ed Sheeran's 'Galway Girl 'in 2018. 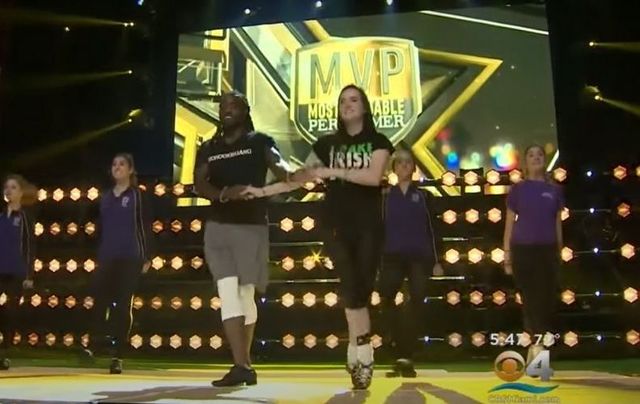 Alex Collins preparing alongside Irish dancers for his performance on CBS's 'Most Valuable Performer' in 2018. CBS Miami, YouTube

Alex Collins, who was at the time a running back for the Baltimore Ravens, gave a spectacular Irish dance performance on the NFL talent show 'MVP: Most Valuable Performer.'

NFL star Alex Collins traded his cleats for some reel shoes when he performed an impressive Irish dance routine to Ed Sheeran's hit 'Galway Girl' during an appearance on the CBS show 'MVP: Most Valuable Player' in 2018.

Collins, a student of the Drake School of Irish Dance in South Florida, appeared with his dance partner Bryanne Gatewood and dancers from Cleary Irish Dance in a routine set to Ed Sheeran's Galway Girl.

Check out this fancy footwork, video courtesy of The Cleary School of Irish Dance and CBS:

Check out Alex Collins on MVP - Most Valuable Performer!

Collins has been Irish dancing since 2011 when his high school football coach's daughter challenged him on whether he was quick, nimble, and strong enough to try out Irish dancing.

Much to his surprise, he not only loved it but also recognized how helpful it was for building the strength and conditioning he needs as a football player.

Now, Collins is known for his signature touchdown celebration move: an Irish jig.

Collins sent Carl a strong message of support, and later met him on the sidelines during a Ravens game to offer more words of encouragement:

We hope to see more touchdown jigs and Irish dance performances from him soon!